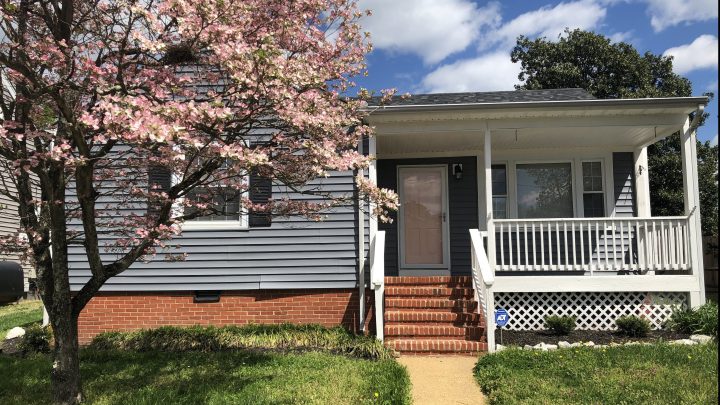 COPY
Alex Hendee bought this house in Richmond, Virginia, just before the pandemic sparked a housing market boom in the area. (Courtesy Hendee)
Adventures in Housing

When Alex Hendee bought a house in Richmond, Virginia, in March 2020, he had no idea what changes were coming to the economy. Unprecedented circumstances over the ensuing year and a half significantly increased the value of his investment.

“The pandemic has been a period of financial success for me, which sounds really uncomfortable and unnatural to say because there’s obviously been so much pain, suffering and loss throughout this period,” he said.

Hendee was in a stable financial position before the pandemic. Then, several factors swung in his direction.

“The first piece is that my interest rate dropped over 1% between the month I was pre-approved and the moment my loan closed,” he said.

As the first wave of COVID-19 infections rolled across the United States, the Federal Reserve slashed interest rates. That benefited borrowers like Hendee, who said he’s saving hundreds of dollars a month on his mortgage compared to where the value of the loan started.

“Not to mention the fact that the stimulus money bought my brand new washer and dryer, and that I could focus on paying the mortgage for the first few months and not have to pay my student loans,” he said.

Then there’s the value of the home itself. “The housing market has only continued to get hotter in Richmond, not only because more people are looking for homes as they work remotely, but because we now have [workers from] Northern Virginia and the D.C. suburbs coming to Richmond.”

“The benefits just seemed to keep snowballing onto each other as time went on … all because of timing and being in the right place at the right time and not because of anything I per se earned,” he said. “There are so many other people across this country who would not have had the same opportunity that I did.”

Driven in part by this acknowledgment, Hendee began volunteering for an organization in Richmond called the Better Housing Coalition, which helps develop housing for low-income families.

“I was raised with this idea of understanding what privilege is, and [that] there’s a responsibility to act on that when you realize that’s where you are,” he said. “This is not only my house, but this is also my street, this is my community, and I need to be an equal and productive part of that.”