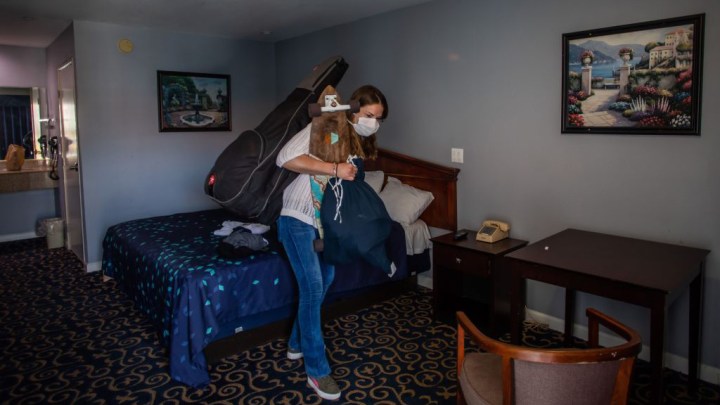 COPY
A resident gathers her belongings in a motel room provided to people needing shelter through Project Roomkey. Apu Gomes/AFP via Getty Images

Last year, California launched Project Roomkey, an initiative aimed at providing 15,000 hotel rooms to people without homes so that they could safely isolate during the COVID-19 pandemic.

Abode Services, a nonprofit agency that works to provide housing for the homeless in the San Francisco Bay Area, has placed nearly 400 people in hotel shelters through Project Roomkey since the COVID-19 crisis began.

Kara Carnahan, director of programs for Adobe Services, spoke with Marketplace’s Amy Scott in April, when the project was just getting started, and in May for an update. Now, more than a year later, Scott checked in with Carnahan to see how the program’s been holding up. The following is an edited transcript of their conversation.

Amy Scott: When the pandemic first started, and you and I first spoke, there were all these empty hotel rooms. And it made a lot of sense to house people who were homeless or at risk of homelessness in those rooms. Now, as occupancy rates have increased significantly, how has the program evolved?

Kara Carnahan: I think we’ve moved from a “Get people in and hold them as long as possible” to “How do we move them through and help them stabilize and move on to permanent housing or a more stable housing situation than when they came in?” So we’re not looking to hold people because it’s the safe thing to do, but how do we really wrap around you quickly, and then move you on so we can make space for the next person to come in?

Scott: How many people have you managed to move into permanent housing?

Carnahan: Almost 400 people. So, I pulled some stats for this meeting. So, it was like, “What have we been doing? I’m tired. What have we been doing?” So we’ve served about 732 people for the life of this program. So, since about March 2020, we’ve exited almost 600 of those people. And of that, about 400 of them have gone on to a stable housing situation, whether that’s permanent supportive housing, going back to live with family, accessing these Section 8 vouchers that have become available or going to a rapid rehousing situation.

Scott: Now the first time you and I spoke, I remember you had set up a makeshift office in a converted Radisson Hotel ballroom. Are you still running those former hotels? Have you expanded on the temporary housing you have?

Carnahan: Yeah, so we are still running the Radisson, which is one of the largest programs in Alameda County. And then we’re also running a hotel out in Berkeley. And then we had a couple other hotels in some of the smaller cities around us that have since transitioned and closed down. So yeah, we’re doing a lot.

Scott: During this pandemic, California’s affordable housing crisis has only gotten worse, in terms of higher home prices and higher rents. How has that affected the population you serve?

Carnahan: There definitely continues to be a need. But we’re seeing resources like we’ve never seen before and being able to offer a lot to the people that we’re serving in our hotels. It’s never enough. It’s never enough, like people are entering homelessness at a rate that is much faster than we can create resources. But I think that there’s been a lot of leadership and foresight to see the need to continue to bring more resources on board.

Scott: Before the pandemic, I understand that advocates for the unhoused had kind of dreamed of hotel conversions as a model that could work. Now that it’s been proven, do you see this expanding?

Carnahan: I hope so. I think that we’ve been able to attract people to come indoors that haven’t been willing to come indoors. You know, I think sometimes people come into the hotels, and, for them, it’s a short stay, and they really are ready to move on to other, more stable housing. And then we definitely have folks where they feel safe for the first time. And so I think that this is a really useful model for engaging our most vulnerable and maybe folks that have really slipped through the cracks for years. So I really do hope we continue to see more of this or continue some of the programs, because it is a very useful model. And it’s really worked for a lot of people.