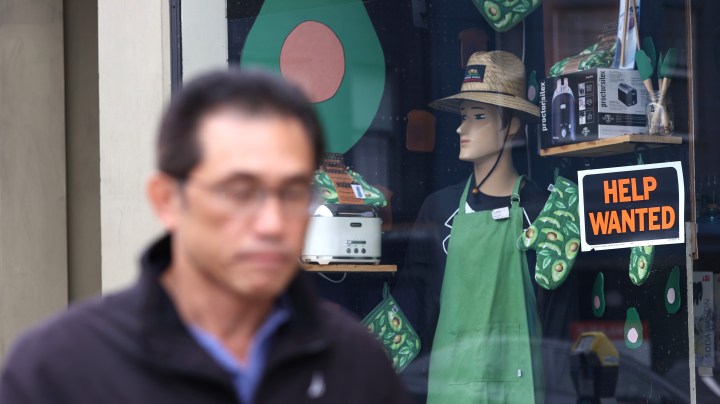 COPY
Many employment statistics and reports have been revised, pointing to difficulties in understanding real-time labor conditions amid the pandemic. Above, a pedestrian walks past a "help wanted" sign. Justin Sullivan via Getty Images

Many employment statistics and reports have been revised, pointing to difficulties in understanding real-time labor conditions amid the pandemic. Above, a pedestrian walks past a "help wanted" sign. Justin Sullivan via Getty Images
Listen Now

The Department of Labor released its Thursday report on unemployment claims this morning, and the news has stayed pretty good. First-time jobless claims were at 268,000, down a little, like they’ve been for months now.

That’s still about 50,000 higher than was typical before the pandemic. That’s decent when you recall that in spring 2020, first-time claims were running about 3 million and 6 million. And 30 million people total were getting weekly jobless benefits.

But those superhigh numbers were probably inflated — by fraud, computer glitches and new pandemic benefits. And it turns out some other employment numbers have been subject to a lot of revision as well.

After soaring early in the summer, job creation seemed to hit a brick wall in August and September. Economists blamed the coronavirus delta wave, and workers and consumers staying home.

But maybe they should have blamed statistical noise. Because once the Bureau of Labor Statistics revised its reports, which it always does as more data comes in, it turned out the economy added 500,000 more jobs.

“Statistics are an extrapolation to the whole from the numbers that one has at hand,” said former BLS Commissioner Erica Groshen.

The job numbers come from a sample of employers and households nationwide, extrapolated based on historical modeling.

Usually, that works pretty well. Except, “the more a certain situation is just unique and has never been seen before, the more likely that looking at past patterns is not going to be as good a guide as it used to be,” Groshen said.

In the pandemic, with layoffs, furloughs and closures due to illness, people answered surveys — Do you have a job? Are you looking? — unpredictably.

Lately, businesses have been sending in their surveys late, leading to upward revisions.

Payroll processor UKG tracks how many people punch in for work day by day. Starting in mid-October “through mid-November, we saw really strong job growth and shift work among hourly workers, in a way we really haven’t seen for about six months or so,” said VP Dave Gilbertson.

That’s a sign the November jobs report might turn out to be really good … unless it’s not. Though we may find out a couple of months later it really was.