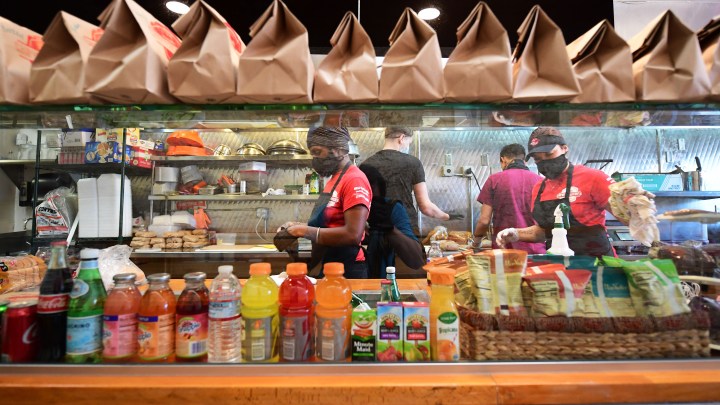 COPY
From major companies to the corner deli, businesses are wrestling with how best to communicate cost increases to customers. Frederic J. Brown/AFP via Getty Images

From major companies to the corner deli, businesses are wrestling with how best to communicate cost increases to customers. Frederic J. Brown/AFP via Getty Images
Listen Now

Sure, inflation is the highest it’s been in 30 years. Supply chains are broken, labor is in short supply — you know the litany.

But rising input costs do not seem to be hurting everyone’s bottom line. The Wall Street Journal reports that profits at two-thirds of the biggest public companies in the U.S. are higher than in 2019.

From Procter & Gamble to your corner bodega, businesses big and small are having to figure out how to tell customers they are increasing prices … without making customers feel ripped off. And that can be a tricky task.

You know those public apologies you see at some restaurants now? The “Hey, we’re sorry, we’ve had to raise prices” sign affixed to the cash register or the menu?

Digo Ramos is not a fan. “It’s not something you ever want to advertise.”

Ramos is the general manager at Schilo’s deli in downtown San Antonio. Since pork and egg prices have been soaring, the popular two-egg breakfast plate now costs 50 cents more.

The tourists who eat at Schilo’s haven’t noticed. The same can’t be said about the regulars.

Right now, consumers may be more willing to accept price increases as a fact of life, said Mohan Sawhney, a professor at Northwestern’s Kellogg School of Management.

But a company can’t just wave the word “inflation” around recklessly. “You can’t just say, for instance, that because of inflation your prices have gone up. You have to be clear whether your input costs have gone up, whether there are shortages of components that have been affecting you,” he said.

Many companies don’t like being that direct, so they camouflage price hikes. Like reducing the number of goodies per package or using weird euphemisms.

“I’ve seen things like, we are ‘rationalizing’ our prices, we are ‘adjusting,’” Sawhney said.

For everyday items, consumers may not even know how severe an adjustment is, said Utpal Dholakia, a marketing professor at Rice University.

“I think there is the myth that prices are well known in the marketplace, and everyone knows what the prices are and how they have changed,” he said.

You may not notice bread or peanut butter or milk being a few cents more expensive. You’ll just see your grocery bill is higher, shrug and say, “Hey, inflation.”