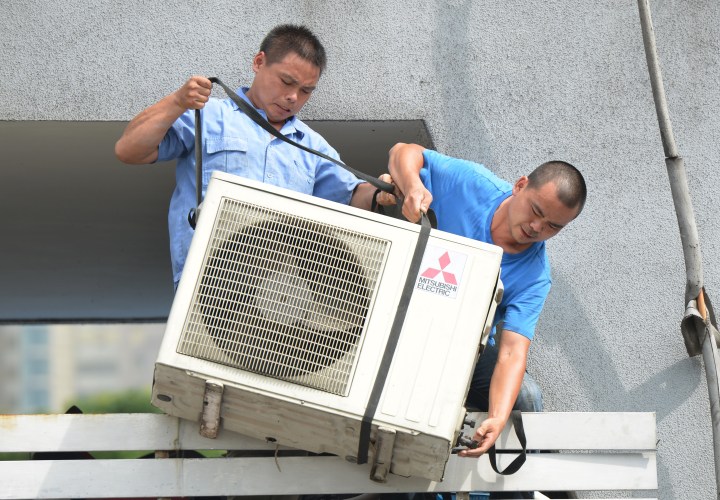 Workers install an air conditioning unit in a food stall in Shanghai in 2013. In a new book called "After Cooling," writer Eric Dean Wilson wrestles with the societal costs of individual air conditioning. Peter Parks/AFP via Getty Images
Listen Now

Another heat wave is expected to hit the Western United States and Canada this week, surely pushing home air conditioners — for those people lucky enough to have them — into overdrive.

Writer Eric Dean Wilson explores the history of air conditioning in a new book called “After Cooling: On Freon, Global Warming, and the Terrible Cost of Comfort” and recently spoke with “Marketplace” host Kai Ryssdal about why studying cooling could paradoxically help us understand global warming.

Click the audio player above to hear the conversation. “The next chapter of air conditioning is uncertain,” he said. “When there are extreme events like life-threatening heat waves, yes, we need cooling. But the vast majority of energy for cooling in the United States is not for those events. It’s for when it’s 80 degrees outside, which granted is hot, but it’s not life-threatening.”

The following is an excerpt from Wilson’s book about the secondary market for the ozone-depleting refrigerant (CFC-12), often referred to by the brand name Freon, that helped home air conditioning become ubiquitous in the United States.

It sounded, at first, like a tall tale. In the heart of the rural Midwest, a well-known reclaimer had legendary stocks of Freon. Over the years, he’d accumulated old appliances and refrigerants to sell on the secondary market. Used chillers, vintage cars, HVAC systems, HFC-134a, HCFC-22, and what was rumored to be several hundred pounds of CFC-12. The reclaimer was well connected and well respected in his community, too. He’d know where to find even more. He called himself “the Iceman.”

In the early trials of his refrigerant runs, Sam had little trouble tracking him down. The Iceman lived a few hours outside Chicago. The Iceman was different from Sam’s other clients: he wasn’t connected to a public business. He made his money entirely from solo reclaiming.

Sam wondered whether that meant he might have even more refrigerant than he was letting on. He told Sam to drop by anytime. After making the necessary calculations — eight hours round-trip, gas money plus emissions, four hundred pounds of CFC-12, and a pickup or two along the way, not to mention some word-of-mouth tip-offs for subsequent trips — Sam figured it was well worth it. He made arrangements. The Iceman lived far off the main highway. Isolated. Although Sam was used to meeting strangers in remote spots by then, he still grew uneasy as he neared his destination.

When Sam first told me the story, I thought of a passage written by Alexis de Tocqueville, the author of “Democracy in America.” In 1835, Tocqueville, visiting the States from France, had written of the rural inhabitants of America: “They are hardly thirty in the middle of a wilderness in which everything rejects their efforts, and they cast on each other only looks of hatred and suspicion.” As if invoking the opening to Dante’s “Inferno,” Tocqueville described a United States that, outside the cities, struck him as a great conflagration of desires at odds. Twenty-five years before the Civil War, Tocqueville noted the dissonance that you can still feel everywhere: reliance on the land but mistrust of the neighbor. He elaborated that “skin color, poverty or comfort, ignorance or enlightenment have already established indestructible classifications among them; national prejudices, the prejudices of education and birth divide them and isolate them.” The passage is sucked dry of hope. Only sixty years as a so-called democratic nation, and the United States was “already”—Tocqueville’s surprise is apparent—a nation “divided” and “isolated” by “indestructible classifications,” chief among them skin color and access to comfort, both deeply connected. Almost two hundred years later, as I read this, I wonder: What has changed?

As Sam pulled up to the house — more like a compound — he saw that this wasn’t going to be a typical pickup. The Iceman’s house was connected to a massive garage, with a backyard full of what looked like junk: rusted fridges, gas tanks, industrial chillers, and other mechanical miscellany. The home of a true scavenger.

Sam pulled into the driveway, where a massive white man — the Iceman, surely — stood. Tall and broad, the Iceman looked as though he possessed the kind of useful strength that comes from working with your hands all day — “beefy” and “intimidating,” as Sam described him.

Sam got out of the car. He was wearing a polo shirt and nice jeans — something he might now flag as a rookie mistake — and right away, the Iceman advanced with hostility.

He asked point-blank whether Sam planned to destroy the stuff for carbon offset credits. Though Sam typically offered a half-story to clients who asked, the Iceman knew better. Was he going to destroy it? At the start of the Freon venture, Sam had decided to respond honestly if asked directly, even if he was unprepared for what might follow. Yes, Sam told him, we’re destroying it.

The Iceman, using the breadth of his physical stature as emphasis, told Sam to get off his property. He refused to sell the material to a “carbon guy.” The eight-hour drive would amount to a net loss of time, strength, cash, and patience. A bust. The Iceman repeated himself. But for some reason, perhaps beginner’s bravado, Sam decided to question the root of the Iceman’s hostility. Why did he care what happened to the Freon? The Iceman told him that the “carbon guys” (he gestured to Sam) were cutting into his business. They were destroying a material that was valuable in the rural market — a waste. It was one thing if Sam was going to fill a tractor with it, but as soon as he saw him, the Iceman knew (he said) he was a “carbon guy.”

What, Sam asked, was the difference between the carbon guys and the reclaimers? Sam pointed out that he, too, was a businessman, that this was a viable, flexible currency in which they both traded. He told the Iceman that, frankly, if he sold it to another reclaimer, even one of the bigger guys, that reclaimer would probably sell it for credits, too, since the cap-and-trade market had become increasingly more profitable. Sam said that he wanted an honest transaction but that ultimately the two of them were in it for the same reason. Yes, he’d made the four-hour trip, and yes, he would be driving four hours back to his wife in Chicago, and yes, he’d come especially to do business with the legendary Iceman of Illinois, whom he would pay in cash, as promised, well above the market value. Still, after considering everything that made them alike, Sam would understand if the Iceman didn’t want to sell him the CFC-12 — or anything else, for that matter — in the future.

Without fully understanding how, Sam was suddenly answering the Iceman’s rapid-fire questions about the carbon market and the destruction of Freon. The Iceman grilled him about climate change, about carbon credits, about the EPA, about Sam’s views on the environment.

The Iceman told Sam that he’d been treated poorly by the “carbon community” — a claim he never clarified with specificity. But Sam listened patiently and tried to answer all his questions with clarity and honesty.

Remarkably, they leveled. The Iceman considered Sam’s long drive home. He decided, in the end, to sell him the CFC-12. Here was a businessman just like him, and he saw that it wouldn’t be fair to send him home empty-handed.

As Sam was packing the hundreds of pounds of CFC-12 tanks into the back of his truck, the Iceman approached him. “You know,” he said, “maybe we can do this again in the future. Maybe,” he said, “if I get some more CFC-12, I can sell it to you.”