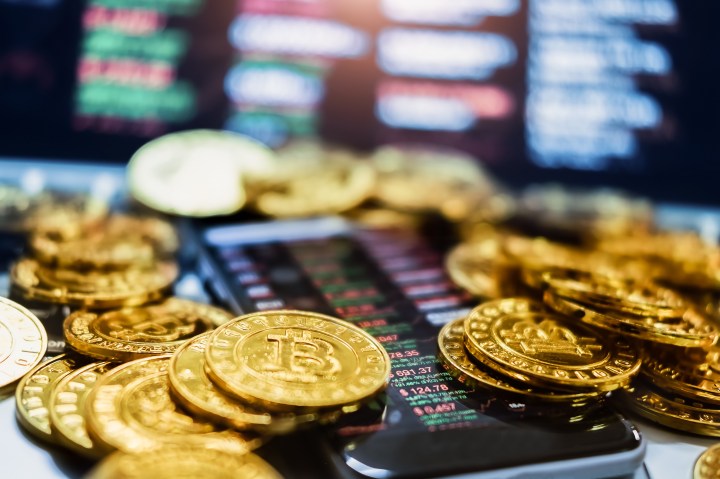 Bitcoin’s market value has surpassed $1 trillion, a milestone that puts the cryptocurrency in a very exclusive club with tech titans like Microsoft, Apple and Google’s parent company, Alphabet.

Bitcoin reached this record high Friday when it traded at roughly $54,000 per coin. It closed the day at more than $55,700 — quadrupling since early November.

Larger investors are taking the digital currency more seriously now, which has helped drive up its price.

“Over the past several months, we’ve seen hedge fund managers like Paul Tudor Jones, insurance companies like MassMutual and corporations like MicroStrategy, Square and Tesla all adding exposure to Bitcoin,” said Stephen McKeon, an associate professor of finance at the University of Oregon.

Electric vehicle maker Tesla, for example, recently purchased $1.5 billion of the cryptocurrency. (CEO Elon Musk himself has been endorsing other forms of digital currency, like Dogecoin.)

So how significant is this achievement?

“The real answer is, it’s purely symbolic,” explained David Yermack, professor of finance and business at the New York University Stern School of Business. “But inevitably, it will generate media coverage and the type of buzz that may draw more people into it and create a certain momentum effect, just because of pure psychology.” (Guilty.)

Market valuations can be overly simplistic. Yermack explained that they’re determined by multiplying the number of company shares (or with crypto, the number of tokens) by the price of the most recent trade.

“The market price you observe right now is what we would call the marginal price of what it would cost to buy one unit right now,” he said. “When you do that multiplication, you’re making a heroic assumption that every coin or every share is worth what people just paid for the most recent share. In other words, you’re assuming that the average cost is equal to the marginal cost. And in real life, that’s probably not true.”

He noted that if these shares or tokens ever came onto the market, there wouldn’t be enough demand for the entire supply. So in all likelihood, if a huge amount of Bitcoin flooded the market, the price would end up dropping.

But while Bitcoin’s milestone is symbolic, the psychology and publicity behind it could translate into very real advantages for the cryptocurrency.

Yermack said the coverage could draw people in and perhaps create a new wave of investment. He added that when more traders come into the market, you get lower costs of trading, which would be a positive side effect.

There are also pending regulatory decisions about whether exchange-traded funds with Bitcoin should be allowed in the U.S. The currency’s membership in the trillion-dollar club “might bring a little more pressure on the regulator to allow some of these products into the mainstream markets,” Yermack said.

McKeon noted that Bitcoin’s success is also helping other cryptoassets.

“It’s a rising tide that’s lifting all boats,” McKeon said. “The bigger picture is that we’re at the precipice of a global migration of capital, the scale of which most people don’t appreciate. Trading, lending, insurance, payments, collectibles, art — all of these use cases are moving on-chain to some degree.”

Yes, the underlying technology behind Bitcoin, known as blockchain, has the potential to be used for all sorts of financial transactions that could cut out third parties.

Bitcoins are traded in transactions where each party’s identity is encrypted and secret. But because Bitcoin is built using blockchain, the digital trail of each token is publicly recorded and open to verification, Marketplace’s Nova Safo wrote.

Blockchain technology could end up changing industries as diverse as real estate and food safety. And right now, British hospitals are even using it to track COVID-19 vaccines.