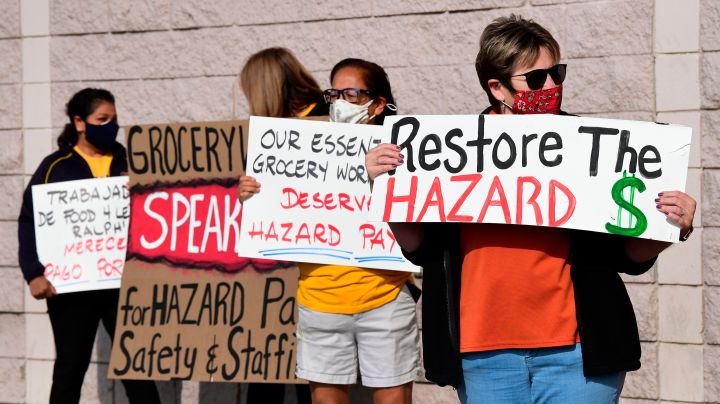 COPY
Working on site during the pandemic is still hazardous, but many who do that receive no hazard pay from their employers. Frederic J. Brown/AFP via Getty Images
COVID-19

Working on site during the pandemic is still hazardous, but many who do that receive no hazard pay from their employers. Frederic J. Brown/AFP via Getty Images
Listen Now

Monday is Employee Appreciation Day at Daniel Gerson’s job. He works at a major grocery chain in Maryland. As a token of appreciation, “they’re giving us an in-app $10 coupon,” he said. “It’s insulting.”

The store stopped paying hazard pay in June. He currently makes $14.20 an hour.

“I’ve broken my back, you know, trying to pay bills with reduced hours and keeping safe,” Gerson said. “And this is the thanks we get after about a year of doing this.”

Almost a year ago, when the pandemic began, essential workers were hailed as heroes. Back then, many companies gave hazard pay, an extra $2 or so per hour, for coming in to work.

That quietly went away for most of them last summer.

“The large retail and grocery chains have made windfall profits during the pandemic and have passed little of that to their workers,” said Molly Kinder at the Brookings Institution’s Metropolitan Policy Program.

Without federal action, it’s mostly been up to local governments to create programs and mandates. They’ve helped compensate front-line workers, but they haven’t been perfect.

Pennsylvania used CARES Act funding to create a hazard-pay grant. About 10,000 businesses applied; the money only stretched to about 640. And new rules in California and Washington are forcing certain types of businesses, mostly large grocery stores, to add “hero” or hazard pay. But they mostly leave out workers in food service and health care.

“The solutions are small. They’re piecemeal,” Kinder said. “You’re seeing these innovative pop-ups because we have failed overall to do something systematically.”

Some companies are still offering incentives. Target gave $500 bonuses at the start of the year. But Adam Ryan, who works at a store in Virginia, doesn’t think it’s enough.

“The industry standards are so low that when a company like Target does this, it gets celebrated as some exceptional measure,” he said.

Ryan thinks hazard pay should continue until the hazard is gone. Until then, he’ll keep taking lunch breaks in his car.