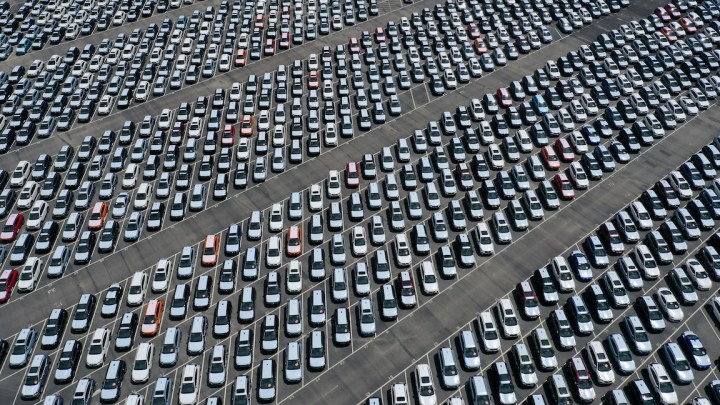 COPY
To some consumers, buying a new car is a way of reclaiming control and increasing safety during the pandemic. Justin Sullivan/Getty Images
COVID-19

To some consumers, buying a new car is a way of reclaiming control and increasing safety during the pandemic. Justin Sullivan/Getty Images
Listen Now

I spoke with many people Wednesday who told me they had bought a new car since March.

“Cars are a little cheap right now, at least from our shopping around,” said Corey Wood of Chicago.

“It came to the point where it was either buy new tires or buy a new car,” said Gia Cattaneo of Haddon Heights, New Jersey.

Each reported researching used cars first. (Everyone tells you how much a car depreciates when you drive it off the lot.) But these days, used cars aren’t the value they once were.

“The gap between the new and the used isn’t as big,” said Bernard Swiecki at the Center for Automotive Research. “Also, many people, when they buy a new car, they trade in their old car, and now the value of your trade-in is going to be higher because that’s the values that we’re getting.”

He said low to 0% financing also helps people pull the trigger on a new car.

And there’s another thing that helped drive car sales over the past few months.

“It all started with the [federal] stimulus,” said Garrett Nelson at the investment research firm CFRA. “It was a windfall of cash for a lot of consumers. And many of the consumers went out and bought cars.”

He also said many first-time car buyers had traditionally taken public transit, especially in urban centers, but safety concerns during the pandemic changed the equation for them.

“People just wanting the freedom of being able to control their mode of transportation,” Nelson said.

And who have enough cash to make that happen.