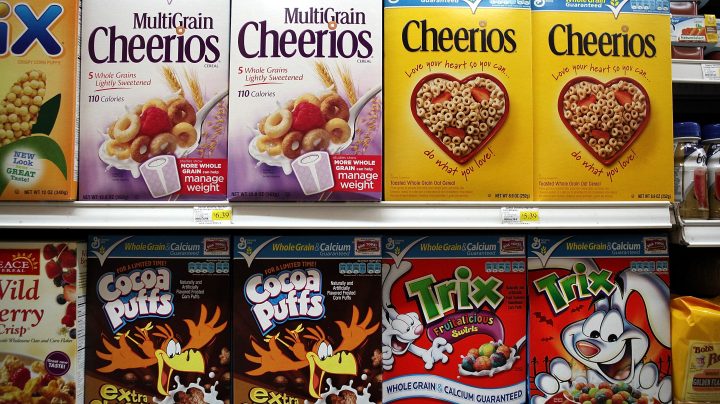 Why do cereal companies choose not to use resealable bags? (I know why: if their product becomes stale quickly, we have to buy more.) Veggies come in such bags. Frozen foods. Chocolate chips. Even doggie treats (we buy enough to be familiar enough with that). Cereal is such a delicate food. And it often spills out of the bag if handled carelessly. And pound-for-pound, cereal is very expensive.

Kellogg’s, one of the major cereal manufacturers, has actually addressed this conundrum a couple of times, stating they’ve tried this method in the past. They’ve found that the zipper closures sometimes “do not close property or food gets caught in the seal,” and that their “current packaging set up just couldn’t cope with the addition of zip locks, as it would make the process much slower and more expensive.”

Diana Twede, professor emeritus from Michigan State University’s school of packaging, confirmed that cereal companies are reluctant to do so because of the extra costs. So it is not a conspiracy on Big Cereal’s behalf to create a sort of planned obsolescence by making their product get stale (although companies in other industries have certainly been accused of doing so.)

If manufacturing an item becomes more expensive, a cereal company might then pass that cost along to consumers, who in turn might decide to buy a competitor’s product, said David Luttenberger, the global packaging director for market research firm Mintel.

Twede said that if a company decides to take the leap, they have no competitive advantage against their rivals.

“It’s like a standoff, where if one of them won’t do it, the other won’t either.” she added. “And they’re always watching one another.”

However, outside of the big brands like Kellogg’s and General Mills, Luttenberger pointed out that some boutique brands have opted to use pouches and zipper closures.

Companies that have developed products with resealability include the high-end brands Bob’s Red Mill Natural Foods and One Degree Foods, which have their hot cereals (like instant oatmeal and steel cut oats) and granola in stand-up pouches.

“Yes, it costs a little more, but our customers are worth it,” said Bob Moore, the founder & CEO of Bob’s Red Mill in an emailed statement.

Danny Houghton, the chief customer officer for One Degree, said that society has shifted away from the traditional family of, say, around four people who would sit around the table, pour a bowl, and go through a box in under a week. With millennials, it might take them two weeks to go through one box.

A report from CB Insights said that 40% of millennials eat on the go, while Pew Research Center found that as of 2018, 55% of millennial women have had children compared to 64% of Boomer women when they were between 22 and 37 years old.

Houghton said the resealable component for some of One Degree’s products allows them to have a fresher product with an extended shelf life.

The amount it would cost to manufacture cereal in a resealable bag vs. a conventional bag in a box might cost around 5% to 15% more depending on the vendor and the equipment, according to One Degree. But because of the complex variables involved, Houghton said there’s no rule of thumb.

Bryan Lacy — the director of sales at Viking Masek, a manufacturer of automated packaging equipment — explained that the film you get in your standard cereal pouch is very cheap.

“It’s made with a layer which obviously you can pull apart easily,” he said. “If you’re going to apply a zipper onto it, at that point, you need a thicker sealant layer than what they use.” (Many cereal bag liners are currently made from high density polyethylene, according to Yael Vodovotz, a professor of food science and technology at Ohio State University.)

Lacy also noted that making bags with zippers would likely involve higher labor costs because of the level of expertise needed to operate the machinery. “It’s a matter of more settings, additional equipment and additional seals,” Lacy said. “There are more parameters that need to be set up.”

In 1924, Kellogg’s placed its cereal in wax paper bags that were also put into cardboard boxes — the bag-in-box format still widely used today, according to a timeline of packaging history from Viking Masek.

Houghton said as major cereal companies broadened their distribution and shipped across the country, they wanted to ensure that their products stayed fresh, hence the sealed bags. The cardboard box in turn allowed them to showcase their brand.

“The printing technology to put something on a bag didn’t exist, really, or if it did, it was so pathetic, that there was no way you could have a reasonable presence on shelves,” Houghton said. “Printing on something like cardboard, where you can form a box, would allow you to have some real estate to be able to actually talk about your product and your benefits.”

“But what happened is you already had a behavior that had been established on how to buy your cereal — which was in the box,” Houghton noted.

While One Degree has its hot cereals in stand-up pouches, it still has other products, like their sprouted corn flakes, in the conventional bag-in-box packaging.

Houghton said he’s attended industry gatherings where there have been discussions about whether companies should all collectively decide to get rid of the current format.

“There have been one or two companies that have tried to do that, and shift all their bag-in-a-box product into just bags, and it hasn’t worked very well,” Houghton said. Translation: sales were weak.

Luttenberger said, though, that it is difficult to give credit to a single package component for a brand’s success.

Another benefit of the cardboard box, according to Houghton, is that you have more physical space to talk about your product.

“There’s a very real marketing element and billboard effect that you get with a box that you won’t have with a pouch,” Houghton said. “It’s just easier for somebody sitting at the breakfast table to read a box than it is to read a bag.”

Twede from Michigan State University said there’s also a lot of mythology around the cereal box, which has the ability to elicit childhood memories.

But with more people eating on the go and the decline of the nuclear family, Houghton thinks these trends could eventually push more companies toward having resealable packaging. According to a 2020 report from Mintel, 47% of consumers say that resealability was the top packaging feature that drives product purchase choices.

However, he thinks COVID-19, like it has with all facets of society, has upended the manufacturing process.

“Coronavirus has certainly interrupted supply chains,” Houghton said. “If you’re going to make a change, it probably would not be right now.”