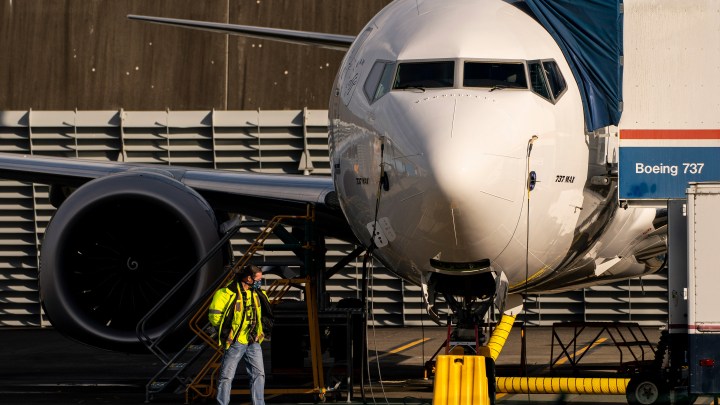 COPY
A worker walks by a Boeing 737 Max airplane as it sits parked at the company's production facility on Nov. 13 in Renton, Washington. David Ryder/Getty Images

A worker walks by a Boeing 737 Max airplane as it sits parked at the company's production facility on Nov. 13 in Renton, Washington. David Ryder/Getty Images
Listen Now

Boeing’s 737 Max planes have been cleared to fly again in the United States, once pilots complete a new training regimen. Wednesday’s Federal Aviation Administration order said that design and safety changes have paved the way to return the 737 Max to commercial service.

Automated flight software was at the heart of the problem. European officials reportedly said they’re close to a similar decision to allow the plane back in the air. The question is, how does the flying public feel about it?

Houston-based IT analyst Spencer Harper said that while he is not a big traveler, he does like to take trips a couple times a year and that he would “have no problems flying on the Max.”

“She has plainly stated it is not happening with us,” he said. “They just don’t trust it. They want to see more people fly before they think it’s ready.”

That probably would suit airlines and Boeing just fine. Keith Mackey, president of Mackey International, an aviation safety consulting firm, said “the reinstatement of the aircraft is going to take quite a long period of time.”

Southwest, which owns the most 737 Max planes of any airline, told reporters it is not planning to fly passengers on the planes before April. American Airlines sent a letter to employees saying it is phasing in use of the 737 Max planes starting Dec. 29.

So, Mackey said, “over that period of time, people will see the aircraft flying safely.”

That’s the hope of the airlines and Boeing. There’s no shortage of seats on other planes these days, so skittish flyers can easily wait and see. American Airlines said if a passenger doesn’t want to fly on a Max, they can change flights.

But Samuel Engel, who leads consulting firm ICF’s aviation group, said that those are not the kinds of passengers taking trips now anyway.

“The consumers who are flying now are the customers who are, in general, less scared about travel,” he said.

Even so, Mike Boyd, with aviation consulting firm Boyd Group International, said to expect rebranding of the 737 Max model.

“Airlines are not gonna use the word “max” for anything. If someone down the hall’s name is Max, he’s gonna have his name changed to Frank,” he joked.

Boyd added that airlines will likely use the term 737-8 instead, just in case a passenger wants to check their booking.