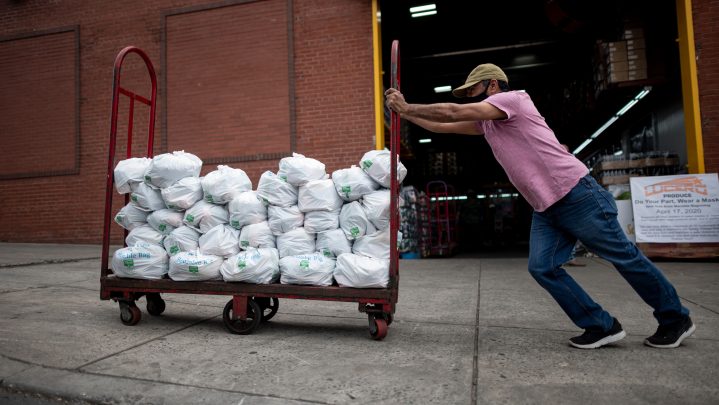 COPY
Felix Pinzon, an unemployed construction worker, pushes a cart of food donations in May in the Bronx. Johannes Eisele/AFP via Getty Images
COVID & Unemployment

Felix Pinzon, an unemployed construction worker, pushes a cart of food donations in May in the Bronx. Johannes Eisele/AFP via Getty Images
Listen Now

Near the southernmost tip of the Bronx, in the back of a very small, empty Mexican restaurant, Natalia Méndez is scrubbing the stove. This used to be lunch hour at La Morada. People would line up outside to eat Mendez’s cooking.

Then the pandemic hit. And unemployment started to creep up.

“It was the first or second week of March,” Méndez said. “I made $500 that week. In one week. In order for this place to exist, we need $10,000 a week.” Méndez and her family, who own this restaurant, made a decision: Keep selling to anyone who wanted to buy food and give the rest away for free. What little Méndez makes from sales and donations isn’t enough to cover her rent; it goes toward other bills.

On the first day, in the first hour, she gave away about 200 bowls of soup. The neighborhood’s need over the last six months has been crushing.

Every month, America gets a big-picture look at how many people are unemployed in this country. In September, it was just under 8%. But an independent research project created by data analysts Yair Ghitza and Mark Steitz during the pandemic has estimated unemployment down to the hyperlocal level and found places suffering from extreme unemployment. In parts of the South Bronx around La Morada, the unemployment rate was estimated to be nearly 30% in August.

Joel Berg runs the nonprofit Hunger Free America, which recently opened an office in the Bronx. He said a lot of the jobs people do here are high risk for COVID-19 exposure, like health care attendants. Others just disappeared.

When the restaurants in Manhattan closed, when many wealthy skipped town, when the offices shut down, the jobs dried up.

“Their tenuous living before this, when they were just at the edge of survival, has been destroyed,” Berg said. “And now they’re just trying to put the bare amount of food on the table.”

Ed García Conde, who founded the blog Welcome 2 the Bronx, has been documenting life here for the last 30 years. García Conde estimates that among the people he interviews and those he knows personally, about half have lost their jobs.

“They’ve had to move elsewhere. I see a lot of people on the verge of desperation. Or already at that desperate moment of just … it’s taken a toll.”

García Conde walked past the long line outside the food pantry of St. Ann’s Episcopal Church.

“In my entire life in the South Bronx, I’ve never seen lines at the food pantry like this. People are here standing all day from early in the morning,” he said.

A parked car played some tropical music, but the faces were sullen. There were elderly who are now in charge of grandchildren, young men who lost their jobs as security guards and janitors. No one wanted to talk much, but volunteers said they are getting about 200 people a day. Many are new faces.

These are the people who are able to venture out. Others can’t.

Like Guillermo Vasquez, who spoke by phone because he hasn’t fully recovered from COVID-19, which he contracted in late March. He said it all started with “a little headache, and my bones hurt.”

Vasquez lives in the Bronx by Yankee Stadium and worked as a condo superintendent in New Jersey. His wife was a stay-at-home mom, and two of his daughters were in school. One of the other supers got sick but bounced right back, so initially, Vasquez dismissed his aches. Until he couldn’t breathe.

“As if I were a fish that had been taken out of water, this is how I felt, ” Vasquez said.

He spent the next five months in the hospital. While he was there, one of his daughters graduated and started looking for work. She is still looking. His wife picked up some cleaning jobs, but the work isn’t stable.

Vasquez said in the moments when he was conscious, he worried about what they might do if he lost his job.

“They were on their own. I told them, ‘See what you can find. I have a few savings. Don’t forget rent, that is the main thing. We can get food somehow. But what worries me is rent,'” he said.

Vasquez has been able to afford rent because his employers have kept paying him. But they’ve been calling to ask when he can come back to work, and he’s worried those checks might not last much longer.

And he has to stay home for the foreseeable future. His lungs are damaged. His hands get strange cramps. He is tired. When it gets to be too much, he goes on YouTube.

“I like to travel the world. I go to Chile, I go to Argentina, I go to Venezuela, I go to Spain.”

He dreams of going, but for now he has to stay and catch his breath.