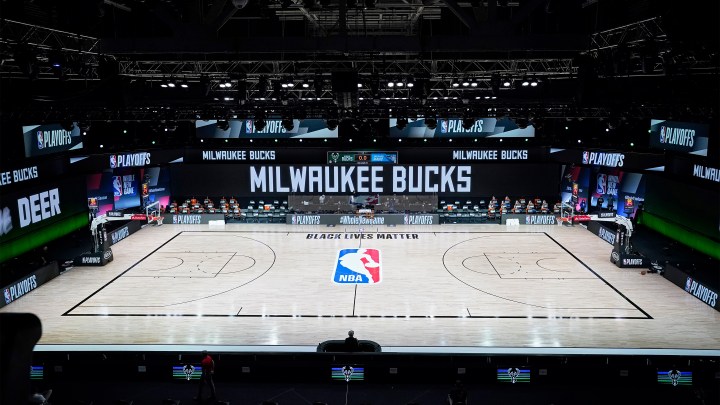 COPY
The court is empty after players strike game five between the Milwaukee Bucks and the Orlando Magic during the playoffs on Aug. 26. Ashley Landis/Pool/Getty Images
Race and Economy

The court is empty after players strike game five between the Milwaukee Bucks and the Orlando Magic during the playoffs on Aug. 26. Ashley Landis/Pool/Getty Images
Listen Now

Athletes in at least five professional sports leagues — the NBA, the WNBA, Major League Baseball, Major League Soccer and tennis — have decided, to paraphrase one of them, that they’re Black Americans first and athletes second. They have decided not to play for the time being.

The decision comes in the wake of the police shooting of Jacob Blake in Kenosha, Wisconsin — and many other Black men and women in many other cities. The athletes want, fundamentally, police and criminal justice reform. So what leverage do they have, and how long might this last?

Wednesday night, Elizabeth Williams, who plays for the WNBA’s Atlanta Dream, made a statement: She and the other teams would not be playing. And she had an ask for their fans.

“If you truly believe that Black lives matter, then vote,” she said.
“Go and complete the 2020 census now. Don’t wait. If we wait, we don’t make change.”

Pro athletes have a platform, and in this case, they’re using it to reach out directly to fans and viewers. Lori Latrice Martin, professor of sociology and African American studies at Louisiana State University, calls what they’re doing a strike.

“By striking, they’re providing inspiration for those that are on the front line and those that are involved in various grassroots efforts,” she said.

But what about more direct, financial pressure? The players are withholding their labor, hoping their demands will be met.

When they refuse to play, that hurts the bottom line for leagues and team owners, who could try to force change.

“The NBA is owned by billionaires, and billionaires have a lot of power,” said Erik Loomis, professor of history at the University of Rhode Island. He said owners could use that power to lobby state legislatures.

In normal times, players would also have some leverage over local governments. When teams play in a city, that city collects tax dollars from parking and concessions. But there are no fans in stadiums right now. So they can’t pull that lever.