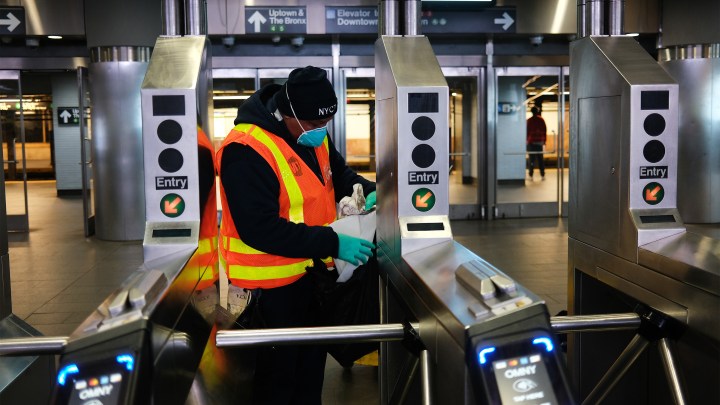 COPY
A worker cleans the turnstiles at an MTA subway station in May. With hardly any farebox revenue, the MTA is considering a loan from the Fed's Municipal Liquidity Facility. Spencer Platt/Getty Images
COVID-19

A worker cleans the turnstiles at an MTA subway station in May. With hardly any farebox revenue, the MTA is considering a loan from the Fed's Municipal Liquidity Facility. Spencer Platt/Getty Images
Listen Now

New York City’s transit system, the Metropolitan Transportation Authority, is staggering through the pandemic. Ridership has dropped by over 90%, and the authority expects to lose more than $14 billion through next year.

The MTA is turning to an unusual source for a little relief: the Federal Reserve, specifically, its Municipal Liquidity Facility, a loan program set up to help state and local governments through the COVID-19 crisis.

The authority has a hard time making ends meet even during normal times, said Nick Sifuentes, executive director of the Tri-State Transportation Campaign.

“There’s only so much that any public transit agency can rely on the farebox,” he said.

With barely any farebox revenues, the MTA’s putting together a patchwork of aid. The Coronavirus Aid, Relief and Economic Security Act provided about $4 billion. The agency’s asking for an additional $4 billion, but that bill is stuck in the Senate.

With a $10 billion shortfall that the MTA still needs to cover, Sifuentes said, the agency is looking for any port in a storm.

“For the MTA, when you’re drowning, any rope is an option, even a frayed one,” he said.

One of the MTA’s options is a $3 billion loan from the Fed’s Municipal Liquidity Facility.

“The MTA rolls over billions of dollars of short-term debt every year,” said John Kaehny of watchdog group Reinvent Albany. “So this would actually just be another short-term lending source.”

The Fed’s loans have to be paid back in no more than three years.

“Who the heck is going to be able to pay back this loan in three years, given the fact that the COVID revenue damage is expected to continue at least all the way through the end of 2021?” Kaehny asked.

The Fed loans aren’t cheap. Seth Lehman at the ratings agency Fitch Ratings analyzed how the Fed’s Municipal Liquidity Facility compared to more traditional forms of borrowing, e.g., government bonds. He found that the MLF was much more expensive.

The MTA is the first transit agency to consider borrowing from the Fed, according to the Reason Foundation’s Baruch Feigenbaum.

“The question is, is this the best way for them to borrow? Is this the cheapest rate?” Feigenbaum said. “And I don’t know that it is.”

Without additional funding, the MTA said it might have to scale back its $55 billion plan to modernize the subway. For now, all new projects are on hold.