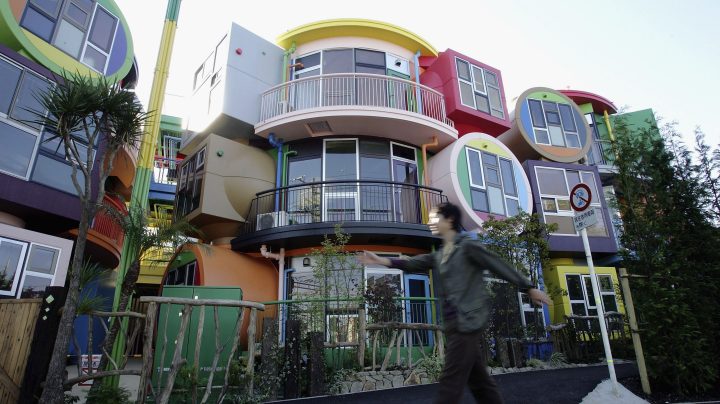 The COVID-19 pandemic has forced most people to spend more time at home. How do the physical spaces in which we live and work affect us? The following is an excerpt from “The Great Indoors: The Surprising Science of How Buildings Shape our Behavior, Health and Happiness,” by Emily Anthes. You can listen to Anthes’ interview with “Marketplace” host Kai Ryssdal using the media player above.

In Mitaka, Japan on a busy street crammed with squat beige buildings, a strange apartment complex jolts the skyline. From the outside, the nine-unit Residence resembles a set of child’s blocks, with the same kaleidoscopic jumble of shapes and colors — a green cylinder stacked atop a purple cube, a blue cube resting on a yellow cylinder. Inside, the building is an architectural acid trip. Every one of the nine lofts has a circular living room, with a kitchen plopped right in its center. The bedrooms are square, the bathrooms are barrel-shaped, and the studies are complete spheres. Each unit is painted more than a dozen different colors, none of them subtle. (Apartment 302, for instance, has a blue and lime-green kitchen, a lemon-yellow study, and a forest-green bathroom.) Ladders in the living room lead to nowhere. The concrete floors are studded with grapefruit-sized bumps. The building looks less like a home than an oversized carnival fun house. But for all its apparent whimsy, it was designed with a serious purpose: to cheat death.

The Mitaka lofts were created by Shusaku Arakawa and Madeline Gins, married artists who devoted their careers to an idea they called “reversible destiny.” Death, they believed, was “old-fashioned,” “immoral,” and not at all preordained. “That mortality has been the prevailing condition throughout the ages does not mean it will always have to be,” Arakawa and Gins wrote in their 2002 manifesto. “Any resistance mounted thus far against mortality, that ineluctable asphyxiator, has been conducted in too piecemeal a fashion…The effort to counter mortality must be constant, persistent, and total.”

In this effort, they argued, architecture was our most powerful weapon. To resist death, we had to radically reinvent our environments, creating spaces that challenged us both physically and mentally. Living in a place like the Mitaka lofts would keep people off balance, shake them out of their habits and routines, shift their perceptions and perspectives, stimulate their immune systems, and, yes, make them immortal. “We believe that people closely and complexly allied with their architectural surrounds can succeed in outliving their (seemingly inevitable) death sentences!” they wrote.

When I first read about Arakawa and Gins, I assumed it was all an elaborate metaphor, an artistic provocation. But when I visited the Manhattan headquarters of the Reversible Destiny Foundation in the fall of 2018, I learned that they meant it literally. “I think they actually believed that if we achieved this, we could extend our life span,” said Miwako Tezuka, the consulting curator of the foundation, which Arakawa and Gins founded in 2010. “They were really, really, really passionate about their belief.”

They put this belief into practice, building half a dozen projects on both sides of the Pacific. In Yoro, Japan, they designed a 195,000-square-foot public park so destabilizing that visitors are provided with helmets. In East Hampton, New York, they created the Bioscleave House, a single-family home even more extreme than the Mitaka lofts, featuring some forty eye-popping paint colors, windows placed seemingly at random, and steep, bumpy floors surrounding a sunken kitchen. “You’re going to twist your ankle,” warned Stephen Hepworth, director of collections at the Reversible Destiny Foundation. “You may well fall into the kitchen if you’re not careful. Don’t rush to go to the bathroom.”

Although each of their constructions is unique, they’re all designed to disorient, with collisions of shapes, colors, and surfaces and sudden shifts in orientation and scale. (In fact, their spaces are so counterintuitive that they come with instructions.) Exiting one of their buildings, Hepworth said, is “like getting off a roller coaster. You’re a bit off kilter.”

Arakawa and Gins had even bigger dreams, for entire reversible destiny developments, neighborhoods, and towns, or what they described as “cities without graveyards.” They wanted to wage a full-scale, all-out architectural war on mortality. But if they discovered the secret to eternal life, they failed to avail themselves of it. Arakawa passed away in 2010 (Gins refused to reveal the cause of death: “This mortality thing is bad news,” she told The New York Times), and Gins died of cancer four years later.

Their body of work, however, lives on. Those who wish to defy death can rent one of the Mitaka lofts through Airbnb.

The notion that architecture can help us live forever is clearly science fiction. But the promise of improving our health and extending our life spans, even just a little, without ever leaving the house? Well, I found that idea irresistible. After all, I am unapologetically indoorsy. It’s not that I don’t like nature; I think nature is lovely. I’ve been camping numerous times — and enjoyed it! It’s just that I’m anxiety-prone and risk-averse, and the world inside my apartment is warm and cozy and safe. Lots of journalists file dispatches from far-flung places — reporting on wildlife in the Serengeti, floods in the Mekong Delta, and ice cores in Antarctica — but I’ve always felt most comfortable plying my craft from deep inside my living room.

Though I might be at the extreme end of the spectrum, I am not alone; modern humans are essentially an indoor species. North Americans and Europeans spend roughly 90% of their time inside, and the indoor environment dwarfs the outdoor one in some major cities. The island of Manhattan is only twenty-three square miles in size but has three times that much indoor floor space. And unlike the outdoor world, the indoor world is expanding. Over the next forty years, the United Nations estimates, the total amount of indoor square footage will roughly double worldwide. “Those additions are equivalent to building the current floor area of Japan every single year from now until 2060,” the organization reported in 2017.

To my delight, more and more scientists have begun to view the indoor environment as worthy of investigation. Researchers in a wide range of fields are now surveying the indoor world, mapping its contours and uncovering its secrets. Microbiologists are charting the bacteria that bloom in our buildings, and chemists are tracking the gases that waft through our homes. Neuroscientists are learning how our brains respond to different building styles, and nutritionists are investigating how cafeteria design affects our food choices. Anthropologists are observing how office design influences the productivity, engagement, and job satisfaction of employees around the globe. Psychologists are probing the connections between windows and mental health, lighting and creativity, and furniture and social interaction.

Their findings suggest that the indoor environment shapes our lives in far-reaching and sometimes surprising ways. To name just a few: Women who give birth in sprawling hospital wards are more likely to undergo cesarean sections than those who labor in more compact ones. Warm, dim lighting makes schoolkids less fidgety and aggressive. Fresh, well-ventilated air boosts office workers’ cognitive function.

Even Arakawa and Gins’s ideas aren’t quite as far-fetched as they seem. We know, for a scientific fact, that the right kinds of challenges can strengthen our bodies and minds. (Start lifting weights and your muscles will swell. Learn to speak a new language and your brain will sprout new connections.) There’s no reason that those challenges can’t come from our homes. Scientists have known for decades that housing lab animals in stimulating spaces — in the company of other animals and in cages stocked with tunnels, toys, mazes, ladders, and running wheels — is better for their health than confining them to spare, solitary cages. This kind of environmental enrichment can boost animals’ immune systems, slow the growth of tumors, make neurons more resistant to injury, and stave off the cognitive decline associated with aging.

There’s circumstantial evidence to suggest that engaging environments are good for humans, too. Researchers have found that rates of dementia tend to be lower in cities than in rural areas, for instance. It’s hard to say exactly why, but one theory is that urban living is more stimulating and complex, and thus protects the brain. “I think spaces that engage us in multiple ways are probably the ones that we will age healthier in,” said Laura Malinin, a cognitive scientist and architect at Colorado State University. In her own research, Malinin has collected some preliminary data suggesting that visually complex rooms may boost the cognitive performance of seniors.

So Arakawa and Gins weren’t completely off track. “I’m not sure about ‘reversing’ destiny, because I think we shape our own destinies throughout our lives, but I do believe that they’re tapping into something,” Malinin said. “Which is that the physical environment has a strong — and up till now relatively untapped — potential to help keep us healthy.”

Excerpted from The Great Indoors: The Surprising Science of How Buildings Shape Our Behavior, Health, and Happiness by Emily Anthes. Published by Scientific American / Farrar, Straus and Giroux June 23rd 2020. Copyright © 2020 by Emily Anthes. All rights reserved.