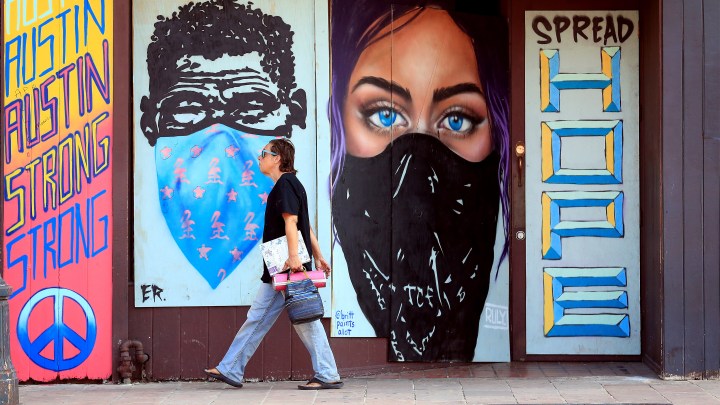 COPY
A bar boarded up in Austin, Texas, in May. Texas is one of seven states without an income tax, so it relies more heavily on sales taxes. Tom Pennington/Getty Images
COVID-19

A bar boarded up in Austin, Texas, in May. Texas is one of seven states without an income tax, so it relies more heavily on sales taxes. Tom Pennington/Getty Images
Listen Now

With consumer spending down a record 13.6% in April and another 1.9 million unemployment claims last week, states are collecting less money in taxes.

Texas, for example, collected a whopping 13% less in sales taxes last month than it did in May of 2019.

“Revenues are way down, there’s no question about it,” said Michael Granof, an accounting professor at the University of Texas at Austin. “They have to cut somewhere. Well, what do they spend their money on?”

Public education for one thing. That’s the state’s biggest expense.

Cal Jillson, professor of political science at Southern Methodist University in Dallas, said Texas is already near the bottom in per capita spending on education, and cuts will bring long-lasting economic pain.

“Everybody understands that education is preparation for the workforce, so Texas is truly between a rock and a hard place, and it’s likely worse than that,” he said.

Texas will also have to reduce health care spending, another big budget item. And things like highway maintenance will be delayed, too.

“We are going to cut to balance and then hope that we can replace those revenues in the coming years without doing irreparable damage,” Jillson said.

Texas is one of seven states without an income tax, which means it relies on sales taxes more than other states, like California or New York. But right now, all states are in the same boat.

“You pray that the federal government is going to step up to the plate and provide some relief soon,” said Michael Leachman, vice president for state fiscal policy at the Center on Budget and Policy Priorities. “You can also draw on your reserves. Besides those things, you don’t have good options.”

The federal government has tried to help state and local governments as part of the different COVID-19 relief packages, but most are going to need a lot more cash before revenue collection picks up again. 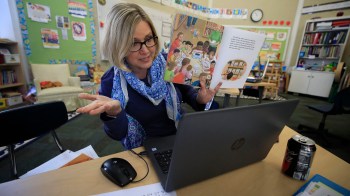