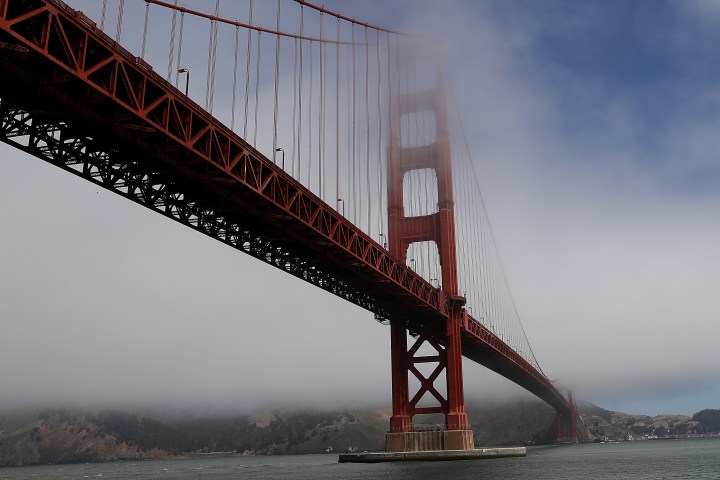 David Brancaccio, Rose Conlon, and Erika Soderstrom May 29, 2020
Heard on:

COPY
The on-ramp to the Golden Gate Bridge in San Francisco was built as part of the Works Progress Administration during the Great Depression. Justin Sullivan/Getty Images
COVID-19

David Brancaccio, Rose Conlon, and Erika Soderstrom May 29, 2020
Heard on:

The on-ramp to the Golden Gate Bridge in San Francisco was built as part of the Works Progress Administration during the Great Depression. Justin Sullivan/Getty Images
Listen Now

New York Gov. Andrew Cuomo on Wednesday called for major infrastructure spending in the New York City area as a way to jump start the region’s economy, which has been badly battered by the COVID-19 pandemic. Cuomo asked President Donald Trump to approve projects that would build a train to LaGuardia airport, expand the Second Avenue Subway and build a second set of tunnels under the Hudson River.

It’s not the first time leaders have turned to big infrastructure projects to spur growth during an economic downturn. During the Great Depression, the government employed millions of Americans through New Deal programs like the Works Progress Administration and the Public Works Administration that built roads, bridges and dams still around today.

So, with interest rates so low, could infrastructure investment help pull us out of the coronavirus crisis?

“The Keynesian-style folks would say [that] as the economy moves towards a recession — and all signs point towards a relatively sustained one — the government stepping in, stimulating demand in the marketplace, in particular for the purchase of everything from steel to concrete to actually employing folks, could be extremely helpful,” said Adie Tomer, a fellow at the Brookings Institution, in an interview with “Marketplace Morning Report” host David Brancaccio.

“But it really depends on what we’re building, where we’re building it, and at what point of the economic cycle we’re trying to execute that spending,” he added.

That’s because infrastructure isn’t a perfect answer to our current economic woes.  Big construction projects wouldn’t likely provide the same kinds of jobs that were lost during COVID-19 lockdowns — jobs that were, more often than not, done by women.

“One of the challenges of thinking of infrastructure as supercharging the economy during this current recession is that folks working in retail and hospitality and other kind of leisure activities, they’re the folks that are really struggling right now. But they’re not necessarily best suited to take on construction and other infrastructure-related occupations,” Tomer said.