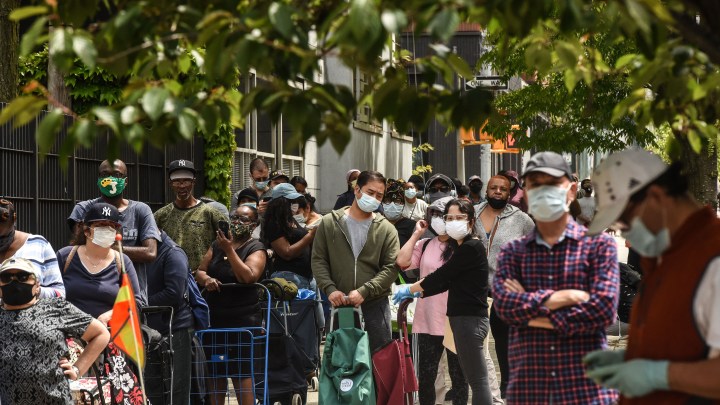 The COVID-19 pandemic has upended our lives and our livelihoods, exposing existing cracks in our economic infrastructure and creating new ones. As we turn our minds to the work of economic recovery, the range of potential policy responses might be broader than it ordinarily is.

“The recovery from the COVID-19 crisis must lead to a different economy.” Those are the words of United Nations Secretary-General Antonio Gueterres from this spring. So, what should change in a post-pandemic economy, compared to what came before?

When reimagining the economy, Felicia Wong, the president and CEO of the Roosevelt Institute, a nonprofit think tank, takes a page from the playbook of President Franklin Delano Roosevelt and his New Deal.

She says a federal jobs guarantee should be up for consideration.

“I think we need a much more humane economy. And that economy has to have good jobs for lots of people,” Wong said. “Because, even given the massive unemployment out there, there is a tremendous amount of work that we need to do. So let’s put the people who need work together with the jobs that need to be done. And really only publicly funded jobs at massive scale is able to solve this big public problem.”

It’s important that these jobs are good jobs, according to Wong; they should come with benefits and pay more than $15 an hour. She spoke to “Marketplace Morning Report” host David Brancaccio about how a jobs program could help the U.S. get on better economic footing. The following is an edited transcript of their conversation.

Brancaccio: This recalls the Works Progress Administration from the Great Depression where we got a lot of people on the government payroll and build a lot of roads.

Wong: You’re right, that employed more than 8 million people. The WPA, it built the Tennessee Valley Authority bringing dams and water and electricity to that very depressed part of the country. The WPA built Camp David, they built the on-ramp to the Golden Gate Bridge.

Brancaccio: One criticism — besides, perhaps, the cost of employing so many people as a matter of policy — one criticism is that, with the government offering the guaranteed job, private employers would have to raise what they pay, and that would make the U.S. less competitive when competing with countries that don’t do that.

Wong: See, I gotta say I think that’s a feature not a bug of this idea. We should be raising pay. It’s really important that workers who we now see are essential, grocery clerks and delivery workers and home health aides, they need to make a living wage — of course, to support their families, but also to support the whole economy. These folks need to be able to themselves pay for education, buy groceries, go on vacation. That stimulates the whole economy. And they can’t do that right now on the sub-minimum wages that they’re getting.

Brancaccio: As you imagine a new, and what you see as an improved economy coming out of this crisis, you have an idea of maybe borrowing from … well, we could look at Germany, right?

Wong: Right, we could look at Germany; we could look at Denmark. One of the reasons that those economies are faring better than the U.S. economy, they have much lower unemployment rates than we do, is that they have something called tripartite bargaining, whereby workers and worker representatives actually sit at the table when making labor market plans.

So it’s not just business executives. And it’s not just government officials, policymakers. But it’s also workers and worker representatives, who sit at the table as experts for everything from what people need to stay healthy on the job (which is going to be more and more important going forward) but also what it takes to do a job better; how you should think about compensating people who do various kinds of work.

I think it’s important to remember that workers should be recognized for what they do know, which is usually how to get their jobs done very well. They sometimes know that better than the guy who sits in the corner office.

Brancaccio: Tripartite — that would be representatives of labor, number one, government, number two, and employers.

Wong: That’s right. And you know, Denmark in particular was able to come to a very good set of arrangements to make sure that people stayed on their jobs as COVID hit, in part because they had this kind of existing tripartite bargaining structure already in place. So they had the relationships and the institutions whereby they could cut a deal quickly, which is just critical when responding to a crisis.

Brancaccio: Even this year, this crisis year, if you think about this notion that some of the European countries use — there’s a debate now about, do we legally protect employers who open up but then their workers get sick with COVID-19, should the workers be able to sue? In, say, maybe Germany, in, say, maybe a Denmark, you might have also representatives of workers engaging the way that the policy would develop?

Wong: That’s right. I think it’s critically important. Look, worker public health is obviously important for those individual workers, which we should all deeply care about. But it’s also important more generally for entire society. That’s the thing about pandemics, they are spread publicly.

So we need to make sure that the people who are most affected by the policy — in this case, workers — have the ability to shape that policy. I think the rest of what you’re talking about with respect to protecting employers is kind of a red herring unless you also have workers at the table.

Brancaccio: And before we go, I want to ask you about the premise of these discussions that we’re having here. Do you think it’s in fact the case that this terrible crisis we’re living through has widened the range of policy possibilities?

Wong: There is no question that we are talking about things now — ways in which workers can have seats on corporate boards, ways in which workers can shape their own jobs and job prospects, the amount of federal relief that needs to go to states that are facing fiscal crises — all of this, both at scale, and in policy design, these are things that we just couldn’t have talked about in any serious and mainstream way even just a few months ago. So these conversations are definitely a result of the crisis. But we’ve got to make sure that this isn’t just talk. Some of this stuff has to get into action if we are going to build a more humane and more resilient economy coming out of this than the economy we had early this year.

COVID-19Reimagining the Economy
Tags in this Story
Share this Story