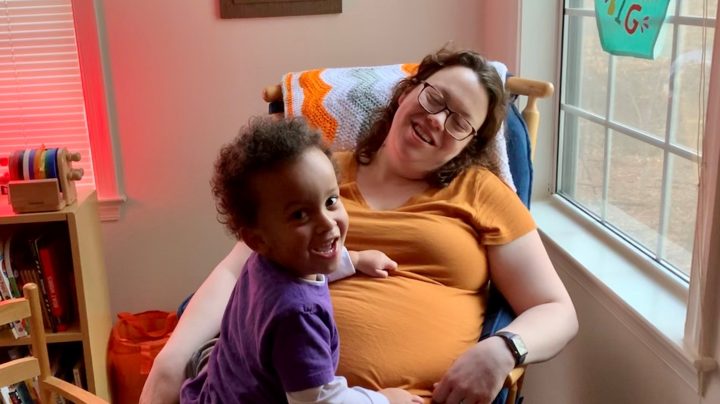 COPY
Claire Battle, 33, relaxes at home with her son Leo, 3, after a long commute from her teaching job. Amy Scott/Marketplace

Claire Battle, 33, relaxes at home with her son Leo, 3, after a long commute from her teaching job. Amy Scott/Marketplace
Listen Now

At the end of another day at Garfield Elementary School in Southeast Washington, D.C., Claire Battle zipped her Pre-K students into their parkas and lined them up to head outside.

“I joke with people, I always go to the bathroom right before I get in the car because I never know how long I’m going to be in the car,” she said.

Battle would love to live closer to her school, but while D.C. has among the highest paid teachers in the country, it’s also among the most expensive places to live.

Scott Goldstein taught in the district for 10 years before starting the teacher advocacy group EmpowerEd. D.C. schools have the highest teacher turnover in the country, he said, partly because of the cost of living.

“That especially affects our ability to recruit and retain teachers of color, many of whom come out of college with much larger college debt,” he said.

Teachers aren’t the only ones who pay a price. Research shows students of color do much better in school when their teachers look like them. Eighty percent of D.C. public school students are black or Hispanic.

“For (teachers) to be able to stay in D.C., to teach in D.C. over a protracted period of time, which is what we really want and need, the housing costs are a real barrier for them,” Goldstein said.

To that end, the district has joined forces with a startup called Landed. The company has helped more than 300 teachers buy homes in other expensive cities, like San Francisco and Denver. Landed matches up to $120,000 toward a down payment. When the house is sold, the company recoups its initial investment, plus or minus 25% of any profit or loss.

Chearal Williams would like to take advantage of a program like that. She’s a teacher’s aide at the same school as Claire Battle, with the same hour-long commute — only Williams lives in Maryland. She’s been saving up to buy a house closer to work for three years, bartending at night while going to school online. For now, though, Landed only works in D.C., where the median home price is about $629,000.

“Even with the down payment assistance in D.C., based on my income, what I’m making, I wouldn’t be able to afford a house,” Williams said.

About 30 minutes into Battle’s drive home, she picked up her son Leo from daycare and buckled him into his car seat. He was hungry, so she dug a squashed cereal bar out of her bag and passed it back to him.

Battle has looked into Landed, too, but is wary of giving up so much equity. Still, she knows the value of living close to her school. When she started teaching, she was having trouble connecting with some of her fifth graders. Then she ran into one of them at the grocery store.

“You know those tabloid magazines that are like, ‘stars, they’re just like us?’” she said. “I feel like it was that moment. ‘Teachers, they buy toothbrushes.’ So it helps to build relationships.”

Relationships that are harder to make, when staying just an hour later to meet with students or parents can add 20 minutes to her commute.

“I’ve been at Garfield for six years, but there is a level of like, ‘Well, she doesn’t live here,’” she said. “‘She doesn’t know what it’s like to live here.’”

At 4:33 p.m., she pulled up to her complex, right on schedule. She and Leo headed up the steps to their cozy two-bedroom apartment.

“We love it here,” she said. “If our family wasn’t growing we’d probably consider staying here.”

But Battle is expecting a baby in May. When the lease is up, she and her husband will have to decide whether to rent a bigger place or buy a house, likely even farther away from her school.

Correction (Feb. 20, 2020): The original story inaccurately described Landed’s down payment assistance. It is a shared equity investment. The text and audio have been corrected.