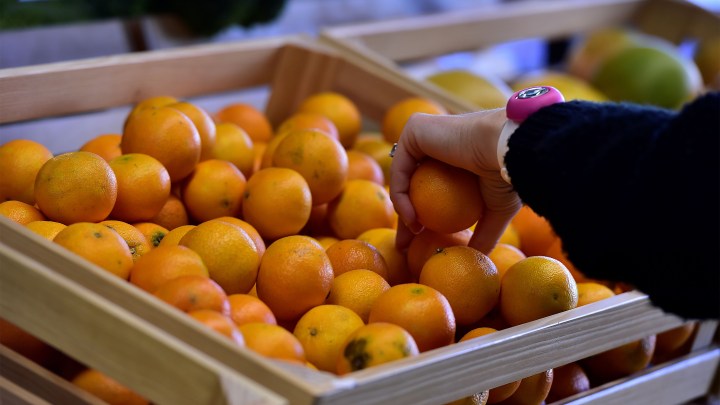 COPY
Are these tangerines? Or clementines? Or mandarins? Georges Gobet/AFP via Getty Images
I've Always Wondered ...

Are these tangerines? Or clementines? Or mandarins? Georges Gobet/AFP via Getty Images
Listen Now

Marketplace listener Rick Peters is 73, retired, and lives in Frederick, Maryland. He shared this memory: “When I was growing up, it was always a treat around the holiday season to get these small oranges, kind-of nicely packaged, nested in the box, and fairly pricey.”

But Peters said that sweet nostalgia has turned a bit sour lately. His discount grocer sells five-pound bags of seedless tangerines year-round. He said they’re cheap, sometimes tasteless and tough. And he asked: “How this went from being a specialized item at the holidays, to something that is kind of like a dime a dozen.”

Let’s start with the science of seedless tangerine, sometimes called mandarins or clementines.

“Citrus originated in Southeast Asia — the Yunnan province of China is thought to be the seat of domestication,” she said. That was sometime in the Paleolithic era. Sometime in the mid-1800s, a small seeded orange variety grown in Morocco was imported into the U.S., Kahn said. “’Tangerine’ is a term that was coined from brightly-colored sweet mandarins that shipped from the Port of Tangiers to Florida,” she explained.

Throughout the twentieth century, most of the tangerines consumed in the U.S. came from Spain and North Africa.

Southern California has a similar Mediterranean climate, and it’s where most U.S. eating-oranges are grown. But according to UC-Davis agricultural economist Dan Sumner, the big citrus-farmers’ coop, Sunkist, favored navel oranges, which have a long growing and selling season.

“For many years they resisted the move towards the seedless easy-peel tangerines,” Sumner said. “Turns out, they were wrong.”

Seedless tangerines were getting more and more popular. Sumner said that a group of California citrus farmers started growing them in the 1990s, marketed under the Little Cuties brand and they took off.

Today, about a quarter of California’s groves are planted in tangerines. It’s a $300 million to $400 million crop that supplies the U.S. market fall, winter and spring, according to Sumner.

At a New Seasons Market grocery store Portland, Oregon, around half the citrus for sale at this time of year is seedless tangerines. “People want to buy fruit they can eat in their car, or things that don’t get their hands dirty,” said produce manager Jeff Fairchild. And I think that’s one of the real appeals with more of the tangerines that are a little puffier: peel it, easy to eat, sweet.”

So, how can we account for listener Rick Peters’ complaint, that the bagged tangerines he can buy year-round are sometimes bland or chewy, neither easy-to-peel nor totally seedless?

Dan Sumner points out that the bags can be packed with a number of different varieties of tangerines, which ripen over the course of fall and winter, to keep a continuous supply flowing to the market. Some of the product available year-round may be coming from abroad, out of storage, or out-of-season, he said.

“We don’t often think about the food luxury we live in, all kinds of fruit available all seasons of the year,” Sumner said. “I think people who don’t remember seasons, they don’t know there’s a few weeks out of the year when the peaches actually taste like peaches.”

And the fresh seedless tangerines burst in your mouth, dribbling juice down your chin.