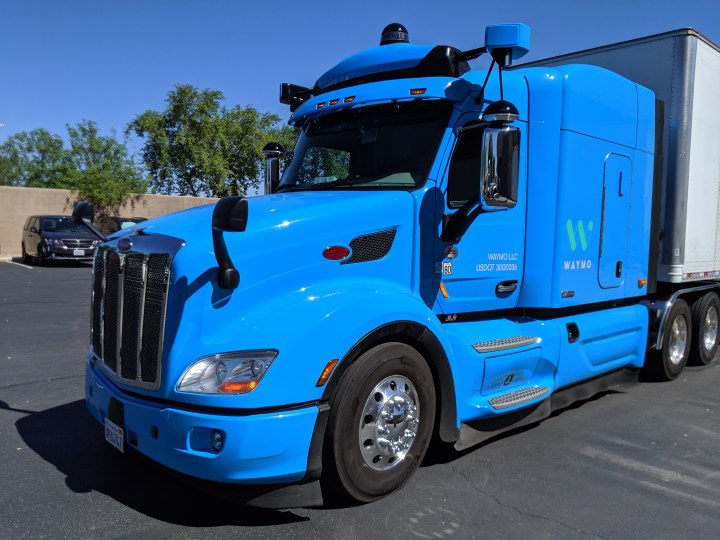 COPY
Waymo, one of the biggest names in self-driving cars, is getting into trucking. Jack Stewart/Marketplace

Waymo, one of the biggest names in self-driving cars, is getting into trucking. Jack Stewart/Marketplace
Listen Now

The promise of self-driving cars is that one day, they’ll free us from the tyranny of traffic. For now, the people developing autonomous vehicles are quietly, collectively acknowledging that it’s a tougher problem to crack than they thought a few years back.

However, making enormous, driverless, big-rigs (semis, tractor-trailers, 18-wheelers, call them what you will) could be easier than putting a batch of autonomous minivans on the road in every city.

To find out why, and see how development is going, I visited two companies taking advantage of Arizona’s welcoming regulatory environment for self-driving trials.

First up, Waymo. The company, formerly Google’s self-driving car project, is running a robo-taxi service in the area around Phoenix, and I couldn’t come to town without taking a robo-ride. It was impressively smooth and confident. Apparently so much so that early riders in the limited commercial trial have quickly stopped regarding a trip as a novelty and are happy just to look at their phones on a ride rather than anxiously second-guess the computer’s driving. It probably helps that there’s still a safety human in (what used to be) the driver’s seat.

But the vehicle I really wanted to see is one that is certain to catch attention again, if you see it barreling down a freeway. It’s parked behind Waymo’s inconspicuous building on an industrial estate. It’s a bright blue, Class 8 truck. As I get closer to it, I realize how huge these vehicles really are. They’re much more imposing when you stand next to a giant wheel than when you see them on the freeway.

“It’s equipped with Waymo’s custom sensors that we build in-house,” said Vijay Patnaik, who heads up trucking for Waymo. “It also has our computer and our software, which does the driving task.”

It’s basically the same kit that the minivans have, but now it has to monitor and control a beast of a vehicle. Scaling up is a move that sounds counter intuitive when companies haven’t solved the self-driving car problem yet, but it makes sense.

Trucks do much of their mileage on the freeway, which is a more controlled environment. Engineers call it a “constrained problem.” There is less cross traffic, no traffic lights and fewer pedestrians and cyclists to contend with.

“From an engineering perspective, a lot of those miles appear to be simpler,” said Reilly Brennan at Trucks Venture Capital. “It doesn’t mean they’re easy, but they’re simpler than a lot of the urban environment traffic you might face if you’re launching a robo-taxi business.”

Waymo is not the only company that wants to play in this space. Startup company TuSimple has a test base 100 miles south in Tucson.

Its converted factory is now a gleaming truck depot. Painted yellow lines on the floor mark spaces for bright white tractors, modified with a row of cameras and other sensors on top of the cab.

TuSimple ran a short trial with the U.S.Postal Service earlier this year and is working with UPS on an ongoing exercise, carrying packages on limited runs.

“The things that we care about are what this enables for carriers and shippers that they weren’t able to do before,” said Chuck Price, TuSimple chief product officer. He said today if shippers want to move parcels across the country quickly, they’ll do it by air, because by land it’ll take five days.

“With an autonomous vehicle, which never has to stop and never has to conform to hours of service rules, you can do that with a truck in two days,” he said.

TuSimple is running its trucks between Phoenix and Tucson, Arizona. Kodiak Robotics is running robo-trucks between Dallas and Houston. Daimler Trucks and Torc Robotics are working in Virginia. So there’s a fair chance you might see a self-driving truck on the open road one day soon. Right now, all these tests still have a human on board for safety, but if these companies can realize their ambitions, one day there’ll be no driver to wave to.