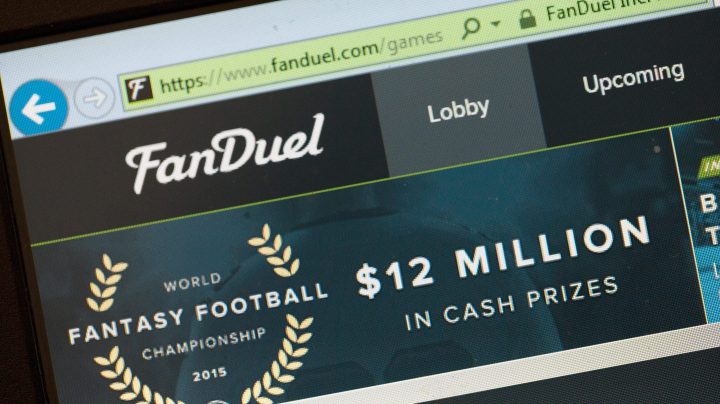 The following is an excerpt from Albert Chen’s new book, “Billion Dollar Fantasy: The High-Stakes Game Between FanDuel and DraftKings.” It follows the rise of the two fantasy sports startups as they battled each other while facing scrutiny from the FBI and Department of Justice.

They were sitting around a conference room table, face to face, for the first time. On one side were the Brits: with their lilting accents, measured demeanors, and pale complexions, they seemed more like a group of academics than tech entrepreneurs. On the other side were the investors from America who had blustered into glum, gray-rinsed Edinburgh from the glitz of West Los Angeles: perfectly coiffed and, as the Brits later marveled to each other, tan — so improbably tan.

These visitors, partners from the private equity firm Shamrock Capital, looked around at the office space, which was a dreary contrast to the glimmering tech offices in the United States: dimly lit, cluttered, decorated with an incongruous mix of British propaganda posters and a curiously curated collection of American sports paraphernalia. They were here because they believed that the Brits’ creation, a startup company called FanDuel, was the key to unlocking the future of sports in America, though when they saw the cheap stickers of NFL team logos slapped on the walls next to outdated posters of players on former teams from forgotten eras, the visitors had second thoughts.

These new rivals seemed hell-bent on taking over the fantasy sports world, even if it meant blowing up the entire industry in the process.

They may not have been authentic sports fans, but the Brits possessed the credentials that suggested they had the experience and intellect to lead a transformative company. Nigel, the boyish, cerebral CEO, was a former media executive and McKinsey man, and that morning, as he presented a picture of how they were going to win the exploding fantasy sports market in America, the Shamrock partners were reminded of why they had felt, when they first met with Nigel months earlier, that the CEO’s analytical, efficient approach aligned perfectly with theirs.

The investors were also familiar with the two technologists who unveiled FanDuel’s new product features. Tom, the chief product officer, was Cambridge-educated, a former PhD candidate, and Rob, the creative director, had already had a hand in cofounding three startups; their collective talent was reflected in the new app, which was as sleek as a Bentley.

The Shamrock partners, however, were not yet familiar with the fourth founder, the last to take the floor: Lesley’s job was to take the money they had raised and turn it into paying customers. Now, not only was FanDuel a company with tens of thousands of paying customers playing their online game, with millions of dollars of revenue flowing in weekly, but it was also, with a new infusion of capital from the new partners from Shamrock, a startup with over $70 million of investment money bubbling in their tank.

“This is a make-or-break year for us,” Lesley declared to the room. “We’re going to have to be very aggressive.”

The screen behind her changed to a slide that described an evolving market. Because FanDuel rewarded winners with prize money, many were beginning to view the games they offered — a subset of fantasy sports called daily fantasy sports games — as a kind of Trojan horse brought into the sports gambling market, territory from which media companies and sports leagues had long been excluded. But now, with a new NFL season weeks away, not only was a media titan, ESPN, in play as an advertiser, but professional sports teams were also returning Lesley’s calls, eager to strike deals.

“We can’t hold back,” Lesley said. There was another factor, she added, just as critical to consider: a startup that had entered the space only two years earlier but was willing to burn through astounding sums of cash to acquire customers. Their ads were appearing on TV and radio and billboards across the United States, everywhere from Boston, the company’s home base, to Las Vegas, where it was catching the attention — and ire — of regulators and gambling operators.

These new rivals seemed hell-bent on taking over the fantasy sports world, even if it meant blowing up the entire industry in the process. They were called DraftKings, though some in the industry called the company by a different name: the suicide bombers.

Earlier that summer, there had been rumors swirling in the industry that FanDuel was closing in on a monster investment; the word was that Nigel had been able to secure $40 million. Soon after, around the time of Shamrock’s visit to Edinburgh, DraftKings announced it had closed on a venture-capital-backed Series B round. That total: $41 million. The number was a warning shot.

The suicide bombers were coming.

Was the game spinning out of control? Was the growth in this unregulated industry sustainable? Onlookers, even some within the companies, would see the dynamics at play in this battle for supremacy between FanDuel and DraftKings and see not a winner-take-all game but a classic case of game theory.

One of the best-known examples of game theory, the Prisoner’s Dilemma, provides a framework for people to understand the balance between competition and cooperation in cases of economics, politics, international relations, human behavior, and business. In the Prisoner’s Dilemma, there are two players. Each has a choice to make: cooperate or defect. Each player makes the choice without knowing what the other player is about to do. Defecting yields a bigger payoff than working together. The dilemma is that, if both defect, they are both worse off than if they’d cooperated.

Was the game spinning out of control? Was the growth in this unregulated industry sustainable?

By the fall of 2014, the two daily fantasy companies were growing so large that it was becoming very difficult for another business to replicate the success of the two leaders; the amount a new company would have to raise and spend was enormous. It was becoming a two-horse race. The companies would soon have a choice to make: whether to cooperate — to get on the same page with their regulatory messaging, to not push the legal envelope with the games they were offering, to control their spending on tournament sizes and marketing — or to remain two competitors hell-bent on doing whatever it took to kill the other. Like Craigslist, daily fantasy was a marketplace business of liquidity — it was not a sports betting business where everyone could set up the house. You needed a liquid market, and most of those businesses were winner-take-all businesses.

It was always optimal for each company to be aggressive since its payout would be improved that way, and so neither company had an incentive to cooperate. Market factors (the size of contests they offered and their advertising spend) and the inability to collaborate (because of the rivalry between the two companies) created a dilemma for FanDuel and DraftKings. The two entities could simultaneously pursue an efficient approach to achieve an outcome that was positive but not the best outcome for each of them. If one company chose to be aggressive while the other took a more efficient route, the aggressive company would take the dominant market share. If, however, both companies were aggressive, the two could be far worse off than if they had cooperated.

The hyperaggressive approach was always at odds with the safest way for the industry to move forward: both companies spending efficiently on all fronts, coordinating messaging on the regulatory front, developing relationships with attorney generals across the country, and focusing on sustainable growth while taking the time to institute controls to protect the industry and ensure that the legal scaffolding was solid. An aggressive strategy yielded a higher short-term payoff than cooperation, but if both companies chose to be aggressive, then both could fare worse in the end than if they had cooperated. The complication was that if one company took the more conservative route while the other was aggressive, the aggressive company would start to take more and more market share until eventually it was the only dominant player in the space. Neither company was willing to take that chance.

The executives at FanDuel would later say they had made two serious miscalculations when considering the game. The first was concerning just how much the capital markets would open up and pay for unadulterated growth at any cost; they didn’t anticipate the money flowing into the industry like a tidal wave and raising the stakes. The staggering money that the two companies raised in 2014 was just the beginning. In 2015, the two would raise a combined $575 million.

When asked to describe the thinking behind the decisions that led to the war and how all the players in it allowed the stakes to reach such unimaginable heights, Nigel would say, “The thinking of everyone inside this world was, Given what I can control, this is the best decision for us. Everyone’s making rational decisions. That may be the case. But the output? The output is insanity.”

Excerpted from BILLION DOLLAR FANTASY: The High-Stakes Game Between FanDuel and DraftKings That Upended Sports in America by Albert Chen. Copyright © 2019 by Albert Chen. Reprinted by permission of Houghton Mifflin Harcourt Publishing Company. All rights reserved.