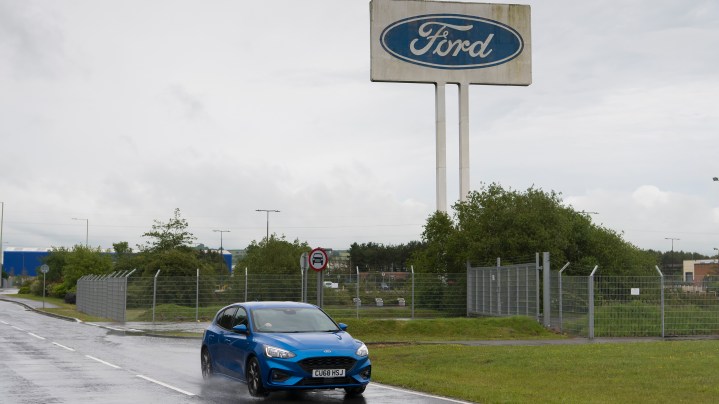 COPY
A Ford drives past the Ford Engine plant, which is set to close in fall of 2020, on June 7 in Bridgend, Wales. Matthew Horwood/Getty Images

A Ford drives past the Ford Engine plant, which is set to close in fall of 2020, on June 7 in Bridgend, Wales. Matthew Horwood/Getty Images
Listen Now

Ford has announced that it’s slashing nearly 20% of its European workforce and closing six factories across the continent.

It’s the latest evidence of challenging times in the global auto industry. Car sales are declining in China, the world’s largest market. Diesel sales have plummeted. And automakers are scrambling to shift to electric vehicle production.

The situation seems particularly acute in Britain thanks to economic uncertainty connected to Brexit. Nissan, Jaguar-Land Rover and Honda have all announced plans to cut back investment or close plants in the U.K.

Ford delivered the latest blow. Earlier this month, it said it would shut its 40-year-old engine factory in Bridgend, South Wales next year and lay off all 1,700 workers there.

Marketplace visited the town, which lies half way between Cardiff and Swansea, to gauge the impact of Ford’s decision.

“These are very well paid jobs at Ford,” Evans said. “Trying to find these sort of wages, in this area, is going to be very, very difficult.”

His co-worker Andrew Pearson, who represents a labor union at the plant, echoed that anxiety.

“I have a wife, three kids and a mortgage and I cannot, for family reasons, leave this area,” he said. “I will need to find another job, but well paid jobs are few and far between around here.”

The impact of the plant closure seems likely to extend well beyond the workers affected. Over the past decade, the Ford factory and its supply chain have pumped money into the economy of South Wales. Many local businesses are now fretting about the possible loss of revenue after September 2020, when the plant is scheduled to be shuttered.

“It’s obviously going to damage my sales” said Jeremy Davis, manager of the Two Brewers pub about a mile away from the factory.

“It’s going to have a knock-on effect on my sales and on the sales of any other retail, leisure  businesses in the area. My takings could be down by as much as 25%,” Davis said.

Given the global pressure the car industry is facing, everyone knew that some jobs would be cut at the plant. But very few imagined that the whole plant would close. Many locals are shocked and angry at Ford’s decision.

Welsh Economy Minister Ken Skates complained about what he called “a betrayal” by Ford, citing $175 million in grants and subsidies the company has received over the years.

“I’m incredibly angry with Ford,” Skates said. “This decision comes in spite of the incredible investment that the taxpayers as a whole, over many years, have made in the site, in the people employed here. And those people deserve better.”

Ford insists the plant has to go as part of the company’s global cost-cutting drive. Bridgend, it says, is uneconomic compared with other plants making the same engine in India and Mexico. And the company points out that the workforce will receive what it calls “generous” severance packages.

But local politicians and union officials are deeply concerned about future employment in the region and are urging Ford to reconsider its decision and think about other options for the plant. For example, retrofitting it to make electric cars or their components.

“It’s a massive and highly efficient manufacturing plant which could be turned into a base for future technology work for the automotive sector in the U.K.,” said Bryan Godsell of the union Unite — not to be confused with the American union with a similar name — which represents 1,300 workers at the plant.

“We cannot afford to allow all those skilled, well-paid jobs to disappear,” Godsell said. “We owe it to our children and our grandchildren to fight for those jobs.”

Some local politicians believe that Ford has opted to scrap the Bridgend facility thanks to Brexit. The company frequently warned that if Britain were to leave the European Union without a trade deal, it would bring tariff barriers and other restrictions onto the flow of goods between the U.K. and continental Europe, which would in turn make life very difficult for Ford and its suppliers.

The company denied that Brexit had anything to do with the Bridgend decision. Assembly line worker Jason Evans is not so sure.

“I would imagine that Brexit  played a part,” he said. “I can see Brexit playing a part when they go through all the calculations of what it costs to source the engines from Bridgend or elsewhere.”

Evans added that he voted in favor of Brexit and does not regret having done so.

Evan’s co-worker Andrew Pearson thinks that Bridgend is just the latest British casualty in what he calls “a perfect storm.”

“We’re facing Brexit, electrification, automation, all these different things coming into the mix,” he said. “One of them on their own would be tough to take. But all of them, all togetheR … it’s extremely difficult.”

Nevertheless, his union, Unite, is determined to fight the closure. It’s threatened a strike in South Wales and at Ford’s two other British factories if the decision to close the Bridgend plant is not reversed.

“This is a principle of trade unionism, which is very strong in Wales,” Bryan Godsell told Marketplace. “We stick together. You attack one, you attack us all. We must do everything to save these jobs.”