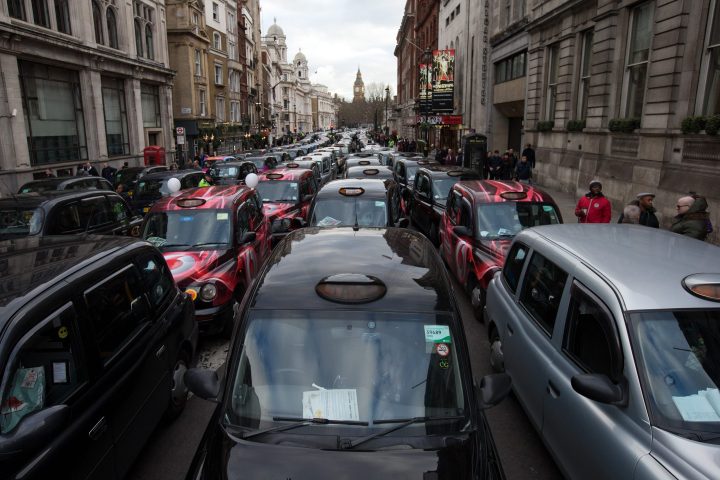 COPY
Black cab drivers block Whitehall as they take part in a protest against Uber on Feb. 10, 2016, in London. Carl Court/Getty Images

Black cab drivers block Whitehall as they take part in a protest against Uber on Feb. 10, 2016, in London. Carl Court/Getty Images
Listen Now

Taking a ride in a traditional black cab in London is usually much more expensive than using a ride-share service like Uber. It can cost double.  But the cab drivers say they offer much better value for money because they can get you to your destination much more quickly and more efficiently, avoiding sudden traffic jams, roadwork or one of the many protest marches that regularly disrupt traffic flow in the British capital. And they provide a mine of information for their passengers. They can do this, they claim, because of “The Knowledge,” their total command of the layout of the city.

“When someone asks for a destination, you’ve got the whole of London in your head. That’s 36 square miles. That’s quite a big area,” black cab driver Sean Paul-Day told Marketplace on a recent trip through the heart of the metropolis.

“To get the license to drive a black cab is a very stringent process,” he said.
“I had to commit to memory 25,000 streets and 50,000 points of interest, like pubs, clubs, galleries, monuments and museums. Only when you can show that you can navigate proficiently between those points are you allowed to work as a taxi driver in London.”

Paul-Day must have a phenomenal memory, yes?

“No better than anyone else’s,” he insisted. “It’s quite amazing what we can  remember when we put our mind to it.”

He’s being too modest. The mental effort required to learn the names and location of every street, avenue, mews and cul-de-sac within a 6 mile radius of Trafalgar Square, as well as 50,000 points of interest, is mind boggling.

The scale of the task becomes apparent when you enter a small, nondescript, prefabricated office building on an industrial estate on the far eastern outskirts of the city.  These are the unassuming headquarters of the London Knowledge School, one of a number of schools training the black cab drivers of the future. Inside, more than a dozen aspiring drivers pore over large maps of the capital for up to eight hours a day, memorizing the whole higgledy-piggledy hodgepodge of the metropolis and testing each other on the quickest routes through the maze.

“Take me from Tate Modern to West End Central police station, please,”  asks one of the students while another closes his eyes, furrows his brow and reels off the itinerary.

Doing The Knowledge and then sitting more than a dozen grueling exams can take anything from three years up to a decade, depending on whether the student is devoted full time to the task. The dropout rate, unsurprisingly, is high: 70%. But is The Knowledge still necessary? Won’t GPS do just as well?

“Absolutely not,” said Chris Campbell, the owner of the school. “There have been a number of tests in which a London black cab driver has been pitted against GPS, and the cab driver, with his intimate knowledge of London, the pitfalls, the places, the little intricacies, has beaten the GPS every single time.”

Whether ever-improving technology will one day outpace the knowledgeable cab driver is another matter, but Campbell argues that The Knowledge performs another useful function: It’s a test of character.

“You need real grit and determination and perseverance to get through it,” he said. “That makes for a more dependable driver.”

Once qualified, cab drivers earn an average of $45,000 to $50,000 a year. Not spectacular, but in spite of that and the rigors of The Knowledge, there’s no shortage of wannabe drivers at Campbell’s school.

“I’m doing it because I want to be my own boss,” Brett Lynch, a security van driver, told Marketplace. Black cab drivers are all independent, self-employed sole traders who own or rent their cabs. “I want to be able go out and work when I want. Work for however long I want to work for. I want to be able to spend more time with my two young sons. It’s the flexibility that appeals to me,” Lynch said.

In spite of the attractions of the job, many licensed black cab drivers feel that life is getting tougher for them in the British capital.

“Our biggest beef,” said Angie Clarkson of the United Cabbies Group, which represents around 2,500 of the 20,000 drivers, “is that the authorities in this town have allowed more than 100,000 untrained ride-share drivers to swamp the streets of the capital. They cause a lot of congestion, and we don’t believe they offer anything like the reliable service we offer. They certainly don’t have The Knowledge,” she said.

The British authorities clearly favor increased competition, and many Londoners seem pleased to pay the lower fares of the ride-share operators, however unfair that may seem to the black cab drivers.

But you won’t find many cab drivers complaining about the years they spent learning the layout of the city.

“London is an incredibly fascinating city, and only when you’ve done The Knowledge do you start to relate to your surroundings here, all the architecture and the landmarks. I think if you were glued to a GPS system, which keeps you on these rigid, structured routes, I don’t think that would be any fun at all,” Paul-Day said.

He said no one could regret learning that all-important skill — in driving as  in life — of knowing where you’re going.