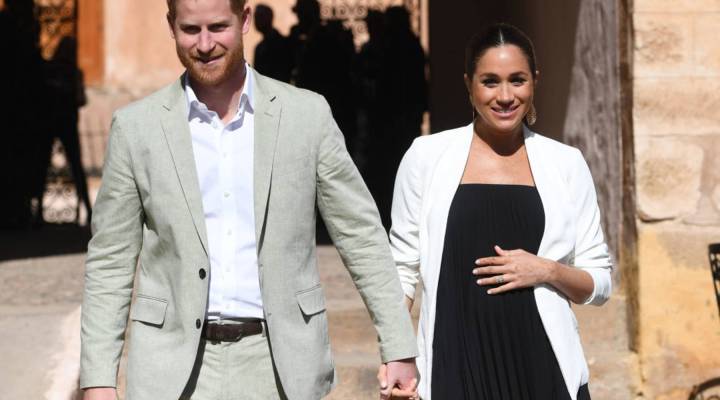 COPY
Prince Harry, Duke of Sussex and Meghan, Duchess of Sussex walk through the walled public Andalusian Gardens which has exotic plants, flowers and fruit trees during a visit on February 25, 2019 in Rabat, Morocco. Facundo Arrizabalaga/Pool/Getty Images

Prince Harry, Duke of Sussex and Meghan, Duchess of Sussex walk through the walled public Andalusian Gardens which has exotic plants, flowers and fruit trees during a visit on February 25, 2019 in Rabat, Morocco. Facundo Arrizabalaga/Pool/Getty Images
Listen Now

In Britain, the latest royal baby has arrived. Meghan, the Duchess of Sussex, gave birth to a healthy baby boy in the early morning on May 6.

“The Duchess of Sussex has been delivered of a son,” came the official announcement from Buckingham Palace. Prince Harry told waiting reporters that he and his wife were “absolutely thrilled.”

But now for a decision that has preoccupied palace officials for months: What sort of position should the new parents occupy?

“The Firm” — as the royal family likes to refer to itself — wants to carve out a new role for the couple to capitalize on their worldwide, rock-star appeal. At the same time, officials at Buckingham Palace would like to deal with the reported rift between Harry and his older brother, Prince William, and their respective spouses.

Any new role for Harry and Meghan is likely to have a strong economic dimension.

“This is all about business,” said Phil Bicknell, a local councilor in Windsor, the town west of London where Harry and Meghan were married and now live. “The royal family is our shop window. The royal family, in effect, puts on display this country’s wares and products. They are our marketing department, if you like,” Bicknell said.

The House of Windsor is believed to boost U.K. trade and tourism by more than $2 billion a year, indirectly, by raising Britain’s profile abroad and supposedly creating a favorable image for the country.

“Now we have Harry, a former soldier and a man of action, with Meghan, our first American princess, a television star,” and now there’s a baby. “It’s a very powerful combination and can only enhance ‘Brand U.K.’ around the world,” Bicknell said.

That’s handy, because Palace officials would reportedly like the couple to become globetrotters and stay out of the U.K. as much as possible in order to reduce the friction with Prince William and his wife, Kate, and ensure that the future King and Queen have more of the limelight to themselves.

One idea is that the pair could become roving trade ambassadors for Britain, expressly promoting British goods and services. But brand expert David Haigh, founder and chief executive of Brand Finance, a consulting firm, thinks that is a bad idea.

“Being too obviously a salesman for British trade is a bit tacky and will probably lead to a problem. Look at what happened to Prince Andrew,” he said. Prince Andrew, Harry’s uncle, was ignominiously fired from the official role of  “special representative for trade and investment” after he associated too closely with some very dodgy foreign tycoons.

Another idea that has been floated is that the couple could base themselves in Africa, to forge — under a humanitarian halo — closer links with the resource-rich continent. Haigh’s not enthusiastic about that one, either.

“There’s been a lot of criticism of wealthy Westerners going to developing countries and acting as saviors, whether they’re white or not, and I think there could be a few difficulties with that,” Haigh said.

He doesn’t think it will be easy to harness and channel the Sussexes’ appeal because they are independently minded, and people like them for that. Haigh said he doesn’t see why they should be banished, anyway.

“What’s wrong with a bit of family friction?” he asked. “It’ll certainly keep the royal soap opera on the road.”