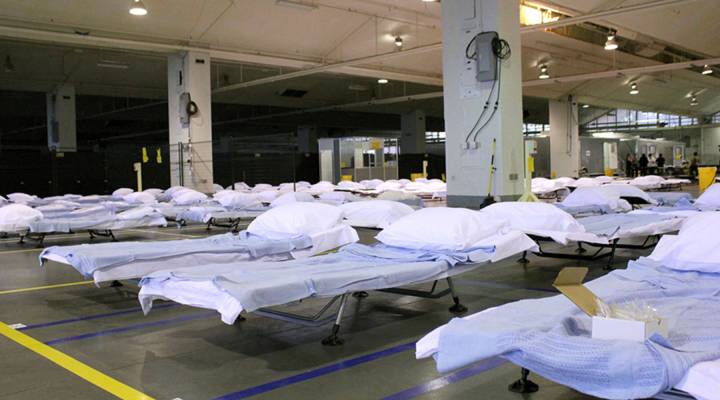 COPY
Beds in an emergency respite opened in Toronto in mid-November to relieve pressure on its stressed shelter system. Emma Jacobs/Marketplace

Beds in an emergency respite opened in Toronto in mid-November to relieve pressure on its stressed shelter system. Emma Jacobs/Marketplace
Listen Now

Since February 2017, more than 37,000 people have walked across Canada’s southern border with the U.S., the vast majority from New York State to Quebec between official points of entry.

There are no official statistics, but Toronto has received thousands of the new arrivals, creating additional pressures on an already stretched city shelter system. It’s also touched off a conflict between the local, provincial and federal government over who will pay expenses for housing and other services.

A combination of push and pull factors have drawn asylum seekers to Canada.

“The first group to arrive was primarily Haitians,” said Mario Calla, executive direct of COSTI Immigrant Services in Toronto. Haitians speak Creole French, “so Quebec was a better fit for them … but then people from various other countries started to arrive and they made their way to Toronto,” he said.

An asylum-seeker who asked to be called Louis to protect his identity ran his own advertising agency in Nigeria before he and his family came to the United States earlier this year on temporary visas. Louis planned to apply for asylum in the U.S. based on religious persecution.

“I just wanted to guarantee the safety of my family,” he said.

However, conversations with lawyers about his chances and ongoing changes to American immigration policies discouraged him.

“I couldn’t hold onto anything,” Louis said. “It wasn’t promising. It was scary.”

The family arrived in Montreal in June, took a bus to Toronto and, like many asylum applicants, turned to Toronto’s homeless shelter network for housing. At the end of October, the city said that nearly 40 percent of the system’s residents were asylum seekers, versus 11 percent in November 2016.

Since then, city officials say they have served 6,500 clients who identified themselves as refugees when entering the system. This does not distinguish between those who crossed at the border on temporary visas versus those who may have been resettled in the country as refugees but later become homeless.

After filling its permanent facilities, the city placed many refugee claimants, including Louis, his wife and their three children in hotel rooms. Their youngest child was born in Canada.

“Everybody has to wake up when the baby’s crying,” said Louis of their life sharing a single room. “But God gave us a peaceful baby, she doesn’t cry so much.”

Seventeen hundred asylum seekers are currently staying in Toronto-area hotel rooms at the city’s expense. The city said it could not provide an average cost but the CBC reported the city has paid a discounted rate of around $38 (USD) a night per room for a block of rooms at the Toronto Plaza Hotel.

In all, the city of Toronto said it has spent almost $50 million (USD) housing refugees and asylum seekers over the past two years.

The day before Louis and his family arrived in Canada, Toronto’s Mayor, John Tory, appealed to the Province of Ontario and federal governments for help.

“We have exhausted our available sites, our resources, and our personnel,” Tory said in a news conference.

Officials in the province of Ontario’s Conservative government have asked the federal government for about $150 million (USD) to cover the city’s housing costs and its expenses for education and welfare payments to refugee claimants.

Local governments in Canada have traditionally been responsible for supporting asylum-seekers while their applications make their way through the country’s immigration system. However, Conservatives have argued that Prime Minister Justin Trudeau and his center-left government bear responsibility for the influx for encouraging asylum-seekers to come to Canada. In particular, they have singled out a tweet by Trudeau following the introduction of President Donald Trump’s travel ban.

To those fleeing persecution, terror & war, Canadians will welcome you, regardless of your faith. Diversity is our strength #WelcomeToCanada

“It would be irresponsible for anyone to invite someone into their house and then turn around and send them off to the neighbors,” said James Wallace, a columnist for the conservative Toronto Sun. “And that’s really what’s happened here.”

Rhetoric employed by provincial and federal politicians has become increasingly heated since the summer. The federal government has reimbursed just over 5 percent of Ontario’s costs, directing other funds to the provinces of Quebec and Manitoba. Even that funding is exceptional, said Debbie Hill-Corrigan, executive director of Sojourn House, which runs refugee-serving shelters for the city of Toronto.

She acknowledged the current influx of applicants has put unusual pressure on Toronto’s shelter system.

“All of these people coming has also created a backlog [in the processing of asylum claims],” she said. “That ultimately can take up to two years.”

This has coincided with a housing affordability crisis in Toronto.

“The average rent of a one-bedroom last year alone went up 15 percent,” COSTI’s Calla said. Both he and Hill-Corrigan said this has extended the amount of time people remain in the shelter system before they’re able to locate long-term housing. Simultaneously, housing costs have left more long-term Toronto residents homeless.

At the opening of an emergency respite shelter in mid-November, Patricia Mueller, CEO of Homes First Society, said, “There are so many different factors that are causing and contributing to this homelessness crisis.”

In the meantime, federal officials have asked Ontario to do more to disperse new arrivals to other cities.

“The rents are really crazy. They’re scary,” he said.

He recently found a job working for a telecom company in Toronto. But the only rental home he could find was outside the city.

That still leaves thousands of asylum seekers in Toronto’s shelters for the foreseeable future. With a nationwide election less than a year away, they’re likely to become a campaign issue.

“How much it plays into federal election plays into how many asylum seekers are still crossing next spring,” said John Geddes, Ottawa bureau chief for the Canadian magazine Maclean’s. Though, he noted the debate between provincial conservatives and the Trudeau government is as much a political calculation as a financial one.

“Whether or not the issue is big enough to deserve this kind of attention is really beside the point,” he said.

Correction (Nov. 29, 2018): A previous version of this story incorrectly described the entry point many immigrants use crossing from the United States into Canada. The text has been corrected.