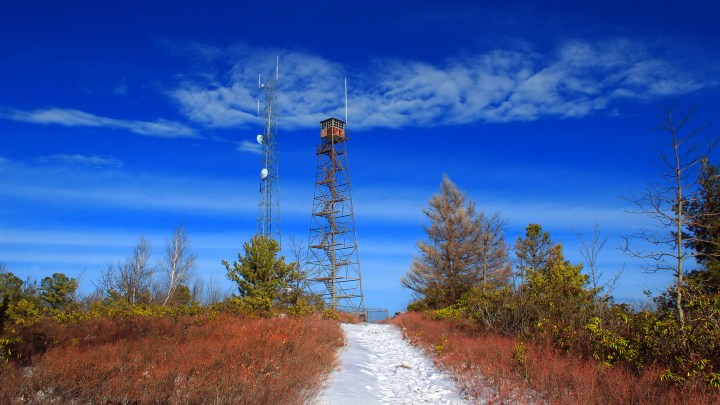 A fire lookout tower in Pennsylvania. Nicholas A. Tonelli/Flickr

A fire lookout tower in Pennsylvania. Nicholas A. Tonelli/Flickr

As a young boy, Ray Villa vividly remembers seeing a fire lookout tower for the first time on his home television. He didn’t fully understand what he was seeing on his screen at the time — he just remembers a tall tower, tucked among the trees in a forest, which fascinated him like nothing else.

As he grew up, that image stuck with him, and transformed into a desire to fight fires for a living. He chalked it up to a young boy’s dream.

Now retired at 62, Villa has 31 years of firefighting under his belt. And after all these years, he’s made that childhood dream come true — he’s finally found a spot as a volunteer up in the tower at Strawberry Peak in the San Bernardino National Forest.

“I love it,” Villa said. “I have it deep down in my bones and it’s something I want to do.”

Today, he spends his 8 a.m. to 5 p.m. shifts in a 14-by-14 cabin, 6,100 feet up in the air — about 30 stories off the ground. In order to reach his cabin, he climbs a narrow, metal staircase up to a narrow, 3-foot catwalk that surrounds the lookout. On the best of days, from his fire lookout tower in the forest, he can see as far south as San Diego and Mt. San Jacinto, and as far west as Catalina Island.

Every 15 minutes, between the use of binoculars and his eyes, he is scanning the forest — on the watch for fire or smoke.

An interior view of the fire lookout tower at Strawberry Peak.

Villa is one of thousands of volunteers and paid personnel who staff fire lookout towers at national parks and forests across the United States.

The 2018 wildfire season, which is Villa’s third, has marked one of the worst seasons in the United States. In California alone, preliminary numbers estimate over 1.3 million acres have burned so far. California’s Mendocino Complex fire broke wildfire records and Colorado has seen the second worst fire season in recent history. The final costs of this year’s fire season have yet to be finalized, but in the 2017 wildfire season alone, 49,000 wildfires burned in the United States — equating to about 8.4 million acres of land burned by blazes nationwide. That same year, according to the National Oceanic and Atmospheric Association, losses in Central and Southern California totaled over $1 billion.

Far across the U.S. from Villa’s fire tower, in Pennsylvania, new fire towers are going up for the first time in decades. In the wake of an evolving national wildfire landscape and in an effort to save money, the Pennsylvania Department of Conservation and Natural Resources has tried something new to address the growing problem – reinvesting in an old school method of fire surveillance and detection – one with a $4.6 million price tag: the manned fire lookout tower that led Villa to a career in the fire service.

Since the initial proposal in 2012, the Pennsylvania state legislature has approved the multimillion-dollar plan to build 16 new fire lookout towers across the state. Thus far, the state has built three new towers, one of which is located at Big Pocono State Park.

Each tower will cost about $300,000 a pop, but in DCNR Fire Division Chief Mike Kern’s eyes, it’s worth the price. “If you can prevent even one fire from getting large, you pay for the fire towers,” Kern said.

Before the state’s reinvestment in lookout towers, Pennsylvania moved away from using them as a main form of fire detection and prevention, relying instead on newer technologies such as cellphone calls from civilians and aerial surveillance.

But according to Kern, the DCNR has spent thousands of dollars every year contracting aircraft to patrol the parks and forests. In Pennsylvania alone, contracted air patrols can cost upward of $150 an hour, and only make flights once, maybe twice a day when in service. In some cases, Kern said, patrols have cost as much as $1,000 an hour.

A conflict between new and old technologies

Pennsylvania wasn’t the only state that made the transition to newer technologies. Over the last few decades, multiple states have shuttered fire lookout towers.

“They thought they could save money with cellphones, more people driving around, and air patrol,” said Keith Argow, chair of the Forest Fire Lookout Association, “but Pennsylvania was smart enough not to deactivate them.”

Because of the state’s unique terrain, Kern explained, there are many parts without cell service. That, paired with the high costs of aerial surveillance, made fire lookout towers an attractive investment for the Pennsylvania Department of Conservation and Natural Resources. In investing into a proactive method of surveillance, one that is comparatively less expensive than aircrafts — Kern says the overall cost of rebuilding fire lookout towers is predicted to pay for itself over the wildfire seasons to come.

Depending on the severity of the fire season, the Pennsylvania DCNR spends anywhere between $2 million to $3 million per year, according to Kern.

And there’s another benefit, something Argow calls initial attack: the eyes up in towers that can pinpoint exactly where a fire is coming from. Initial attack, he notes, saves fire rigs and crews ”minutes, maybe sometimes half hour” looking for fires.

Outside of fire towers, Argow said, there aren’t many effective ways to spot smoke within a short period of time — time that can prevent a small fire from turning into something larger.

A history of fire lookout towers

Fire lookout towers date back to the turn of the 20th century. By the 1940s, at the so-called “peak” of their popularity, over 5,000 towers stood guard over national parks throughout the U.S. Although only about 400 towers are still standing, volunteers and staff still man lookouts. Many are also in various states of disrepair.

In the state of Pennsylvania, 50 towers remain standing today, many of which are still used and manned during the fire season. But of those 50 towers, many were old and no longer met safety codes. Which led the Pennsylvania DCNR to initially use state funds to renovate already-standing towers across the province.

A wrench was thrown into their plans when no engineering firm would sign off on renovations.

“There was no practical way to bring those towers up to modern engineering standards,” Kern said. The oldest towers, he pointed out, were nearly 100 years old, which led to the proposal to build 16 new towers across the state.

As a self-identified “aging brain with a lifetime of involvement” in the fire sector, Argow isn’t sure what direction lookouts are headed, but he notes that fire towers aren’t the sole answer to effective wildfire detection and prevention.

An ideal scenario, he says, is a unified approach — one that utilizes not only lookout towers, but people driving through the forest and aerial surveillance.

He also believes other states are beginning to feel the impact of the withdrawal of fire lookouts in their state and national parks in the current wildfire climate. States like California, he says, are also restoring and rebuilding fire lookout towers not only as way to prevent wildfires, but to utilize them as an educational tool.

Volunteer fire lookout Ray Villa stands at the Osborne Fire Finder inside of his tower at Strawberry Peak.

And Villa takes that secondary responsibility up in the tower just as seriously as looking out for wildfires. Not just for the visitors, or the forest, but also for himself.

“After 31 years in the fire department, there wasn’t a day that I didn’t still learn something. You just don’t know it all,” he said.