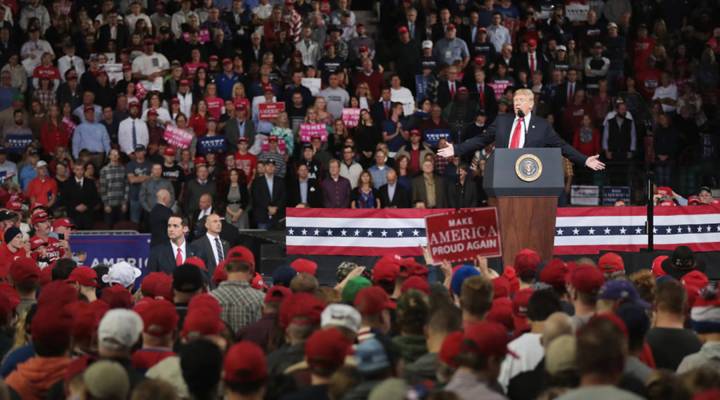 COPY
President Donald Trump speaks to supporters during a rally at the Kansas Expocentre on Oct. 6 in Topeka. Scott Olson/Getty Images

President Donald Trump speaks to supporters during a rally at the Kansas Expocentre on Oct. 6 in Topeka. Scott Olson/Getty Images
Listen Now

President Donald Trump has been out on the campaign trail, supporting Republican candidates before the midterm elections. Across the country, local law enforcement provides security for presidential visits. That’s been true for all presidents.

So who’s paying for that, and how much does it cost?

At an Oct. 6 rally in Topeka, Kansas, some 500 officers responded from 20 local agencies.

More than 100 Shawnee County sheriff’s deputies and civilian employees were on hand, which includes most of the agency, said Sheriff Herman Jones. While all expenses haven’t been tallied, Jones guessed that the event cost his agency about $30,000.

Jones told his troops that he wanted the only news coming out of the rally to be whatever the president said.

“Let’s make sure we’re not an ink spot in history,” Jones told his officers. “Let’s hope that Dallas is the only place where that happens.”

Topeka police spent $26,458, mostly in overtime costs, said Lt. Andrew Beightel. That will come out of the agency’s budget, he said, but since the department is down 30 officers, there’s some room for the expenditure.

“We just have to, later on down the line, look at what we can cut back on to kind of cover that,” he said.

Police at the entrance to a Trump rally in Topeka, Kansas, on Oct. 6, where all of the 11,000 in attendance had to go through airport-like security.

The largest force at the rally, the Kansas Highway Patrol, had more than 100 officers, doing security in the Expocentre, controlling traffic and riding in the president’s motorcade, said Lt. Adam Winters. The agency will be tallying costs for a few weeks, he said.

“For the guys that were on the motorcade route, they were sitting on intersections and blocking those the president was coming through,” Winters said. “Then we also had a couple cars in the procession as well.”

Although there’s no grand total just yet, a good guess is roughly $200,000, all paid for by local taxpayers. And that’s not counting federal costs.

Calls and emails seeking comment from the Republican National Committee were not returned.

Jones, the Shawnee County sheriff, said all the work was worth it.

“When you hear that Air Force One and the wheels are up, it’s just a big, massive exhale,” he said. “Just, like, so much relief.”

Jones may not want to breathe easy just yet. Vice President Mike Pence is scheduled to appear at another GOP rally in Wichita this week. 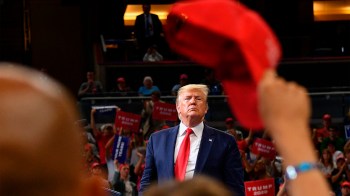