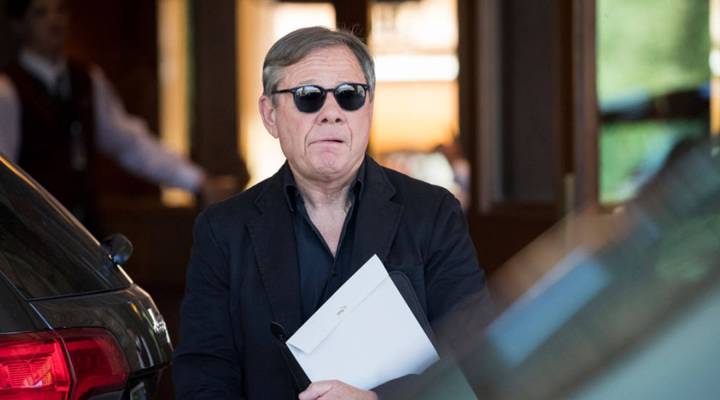 “Jurassic Park,” “Shindler’s List,” “Rain Man” and “Ghostbusters” are all movies that might never have been made were it not for a guy named Michael Ovitz. He grew up over the hills from Hollywood in the San Fernando Valley, started working in the entertainment business giving studio tours on Universal’s back lot while he was still in high school and eventually became one of the most powerful people in Hollywood. CAA, the talent agency he co-founded and ran for 20 years is still a force in the industry, representing Hollywood A-listers like Meryl Streep, George Clooney and Tom Hanks. Ovitz talked with Marketplace host Kai Ryssdal about his new book on his life and the business called “Who Is Michael Ovitz?” The following is an edited transcript of their conversation:

Kai Ryssdal: So the title of this book, “Who Is Michael Ovitz?” And I’m going to paraphrase you, except in radio-friendly language, in a big part of this book, you come off as kind of a jerk.

Michael Ovitz: Well, I was pretty honest about what occurred and some of the good things that we did and some of the bad things. When you’re in a service business, you’re in a place where you can’t please everybody all the time. You’re there to please your specific client and to get their dreams made. And there’s fallout along the way.

Ryssdal: And your role in that equation as the agent and the deal-maker was what?

Ovtiz: We were the facilitators, and we came up with this concept of putting creative people together. So if you personally had an idea, we would put you with other creative people to enhance it and then try to create something that gave all the creative people much more leverage against the bar.

Ryssdal: Which is the innovation and the disruption that CAA brought to this industry, right? You got a writer and an actor and a director and a producer, you packaged ’em, and you got them to the studio, and you had the whole enchilada.

Ovitz: Well, the whole concept was to shift the balance of power from the buyer to the seller. And the clients needed that leverage, not just for financial reasons, but for creative reasons. You know, the biggest fights in the entertainment business are creative fights. The studio wants one ending, the director or actor or writer want another ending. We felt that the creative people were always right. And we felt that they needed to be backed, and we felt that they needed to have the support of an organization behind them, which they hadn’t had for a long time.

Ryssdal: Could you have been as successful as you were without the — and I think this is your word — obsessiveness, right? You were detail oriented and mission driven, which led to, as you say in the book, if your funeral was held today, 25,000 people would show up to make sure you were really dead.

Ryssdal: Could you have been “Michael Ovitz” without that drive?

Ovitz: I don’t think so. In that time frame and in a really flush economy with the amount of options available, we had to set a stage that we were all-knowing and had the ability to execute and could deliver almost anything. We couldn’t look weak. We couldn’t look vulnerable. Could we have done it a little differently? Probably, with a little less of the aggressiveness, but I don’t think we would have built the company in the period of time that we did without that push.

Ryssdal: A word here about money — there’s a lot of it in this book. You call it a scorecard for success. Does it have to be that way?

Ovitz: It doesn’t have to be. Everybody has their own definition of what they want. There are a lot of people that do extraordinary things in life where money is a secondary issue. When you grew up the way I did, money became a scorecard. And when you want to, shall we say, get out of the valley, money is a pathway to be able to put you in a position to try to make the kind of social change or business change that you’d like to make. It equates with leverage, frankly.

Ryssdal: As you look at Hollywood today, and the #MeToo movement, and some of the social changes that are happening, you were in a position of power in this industry for a really long time. Could you have done more in your time in power to make it a better place?

Ovitz: Well, we, it’s really difficult to have these conversations today, looking back 30, 40 years. When we started the business in ’74, these issues weren’t brought to the surface like they are today. They weren’t as apparent. We also didn’t allow a lot of things to occur. We didn’t send clients into meetings unescorted. We had, 40 percent of our staff were women. I think what’s happening right now is good for the business. It’s been a problem that’s been an undercurrent in the business from Day One. This is not a new issue. We just, it never came to the surface.