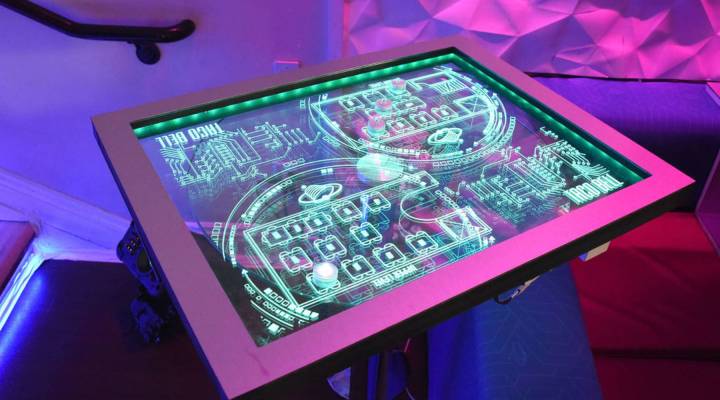 Labor Day is the perfect day for the last installment of our summer entertainment series. The movie “Demolition Man” is set in 2032. It portrays a utopian society with no crime or bad thoughts. Sandra Bullock plays a rookie future cop. Wesley Snipes is a supervillain on the loose. And Sylvester Stallone is the old-school violent cop thawed out of cryostasis to hunt him down. Its 1993 tech predictions were solid. The movie included self-driving cars, video conferencing, voice-activated technology and even touch-screen tablets. Amy Webb is a futurist, professor of strategic foresight at New York University’s Stern School of Business and works with big organizations and companies on strategic planning. She also consults on future tech for movies and TV. Molly Wood asked her what the “Demolition Man” filmmakers were able to see coming 25 years ago. The following is an edited transcript of their conversation.

Amy Webb: We already had sort of the beginnings of smartphones. And there was experimentation happening with haptic screens. So a lot of those signals were already there. I think they got a lot of that technology spot on. And, you know, really some of the best science fiction and some of the best films and television shows that are set in the future tend to be those that aren’t fantastical, but instead take a very pragmatic approach because they want to create a very realistic vision of the future. Really it’s no different from the work that I do with the government and enormous companies who are trying to create their strategies.

Molly Wood: It does feel like the books and movies that have the most resonance also have some sort of societal prediction or predictive elements. In the case of “Demolition Man,” it has dramatic income inequality, censorship of speech and thought. Are some of those things harder even to get right than the technology?

Webb: I think that in broad strokes, the societal issues that were raised in “Demolition Man,” but also in movies like “Blade Runner” and a lot of the science fiction that was written in the ’50s and ’60s, they all touch upon the same points. What happens if we preserve the status quo and we wind up with polarized political views? We wind up with drastic inequality? We wind up with societies that are violent in ways that we haven’t seen before? Our adversaries in the future are not the usual geopolitical suspects, but are instead enormous corporations?’ And, given the pace of change right now that is happening in technology, our natural inclination is to connect the dots between all that technological change and the concerns that we have about our place in the future as it starts to arrive.