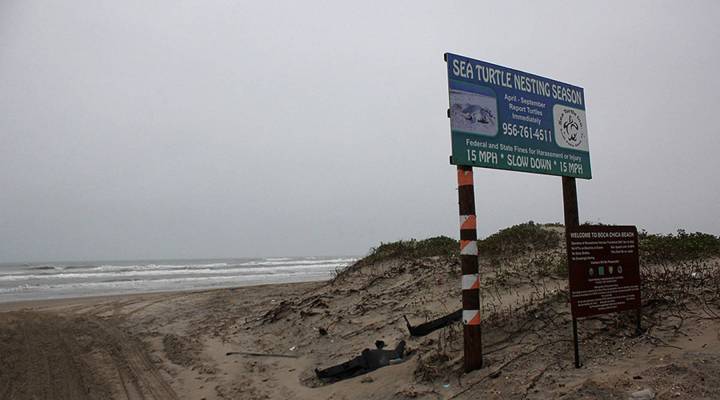 COPY
The popular Boca Chica Beach sits at the end of Texas Highway 4, less than a half mile from SpaceX’s launch facility. Paul Flahaive/Texas Public Radio

On a rainy day in February, the Boca Chica area is fogged in. Terry Heaton stands on a raised porch in his backyard. He squints into the light rain.

“You can’t see it now, but we have a beautiful view of Port Isabel. We see deer up here, a lot of coyotes. I mean, yeah, it’s, like, right there, like, boom,” he said, pointing toward the coast.

Heaton lives in Boca Chica Village, an isolated 45-minute drive from the border city of Brownsville.

He’s lived here for 18 years with his wife, Bonnie, whose name is emblazoned on his left bicep. He’s a retired construction worker.

“I do the lawn and fish, almost in that order,” Heaton said.

Boca Chica Village is composed of more than 30 houses on two streets, about 2 miles from Boca Chica state beach. They moved to the remote coastal neighborhood for the value, he said. The houses were cheap, they had beach access and it was quiet.

The Heatons are one of two year-round families in what is predominantly a vacation community — many are upper Midwesterners. It’s the kind of community that invites a reporter in from the rain before declining to be interviewed.

From Heaton’s kitchen table you can see the towering antennas of spaceflight company SpaceX. Heaton is convinced their new neighbor jeopardizes the peace and quiet he enjoyed in this neighborhood. The launchpad for the company is less than 2 miles away.

Heaton worries about a rocket exploding, like the ones the company suffered in 2015 and 2016 over a thousand miles away in Florida.

He’s concerned about the monthly launches the company can make and access to his home. According to a plan filed with the Federal Aviation Administration, on launch days the state will shut down State Highway 4 to all but residents.

But mainly, Heaton said, he is frustrated because the company hasn’t talked to residents directly in two years.

“We’ve had three meetings I think it is with SpaceX, and that was at the very beginning,” Heaton said. “What they told us then was we were not going to have to leave. We weren’t gonna have to do any of this. They were going to be good neighbors. Haven’t lived up to any of it as far as I am concerned.”

SpaceX has opted to speak to the community through local media, parsing out progress notes as they occur.

Heaton learned from a press conference that SpaceX would launch the biggest ship in history just down the road once the facility is finished.

“But mostly it’s gonna happen at our Brownsville location because we have a lot of land with nobody around. So if it blows up, it’s cool,” said founder Elon Musk in the press conference.

SpaceX responded to concerns about launch site safety in a statement:

“Texas is home to hundreds of SpaceX employees and their families. The notion that SpaceX would do anything to endanger them or any of our neighbors is simply not true. We love Texas. Every single SpaceX rocket and spacecraft is tested in Texas before flying to space and back again. We are entering a new and exciting era in space exploration, and Texas will play an increasingly important role in our efforts to help make humanity multi-planetary.”

Andrew Goetsch is not worried about a rocket explosion.

He’s the other permanent resident of Boca Chica Village. He moved to the area from California two years, but unlike what he estimates is 99 percent of his neighbors, he loves SpaceX.

“The idea of some people that this whole thing should be canceled so they can come down from Minnesota every winter and wreck the opportunity for Brownsville to be on the world map … seems ridiculous to me,” he said.

Goetsch moved from California two years ago to be near the project. He mounted a security camera to a 40 foot pole in his backyard to watch the development of the control site. After all, Goetsch said, SpaceX is a business — and an opportunity for the region.

In a statement, SpaceX spokesperson James Gleeson said the company has invested millions in the project, most recently in a solar panel field to power its ground antennas. And Texas has earmarked $13 million for SpaceX’s project.

“We should know in the next 12 to 18 months what kind of impact it’s having,” Serafy said.

But the biggest impact is going to be on tourism.

An estimated 100,000 college students came to nearby South Padre Island for spring break this year. That’s the same number of people that poured into Brevard County, Florida, for SpaceX’s Falcon Heavy launch back in February. So the prospect of 12 spring-break-like events a year “would be awesome for the area,” Serafy said. “It’s just an influx of hotel rooms, flights, restaurants, so it would have a significant impact in our area.”

Harlingen Economic Development Council head Raudel Garza said he sees the impact right now and that Harlingen is expanding its hotel room stock by a third.

“Two of those hotel developers told me a year ago when they were talking about bringing their hotels in at this time is they were trying to time it so they could be open by the time SpaceX was launching their vehicles,” he said.

Predicting SpaceX timelines hasn’t proved easy for even the company.

The company began construction on the launch area in 2014. It suffered a setback when a rocket exploded in mid-air in 2015. After a 2016 Falcon 9 explosion crippled one of its government launch pads, the company had to devote time to rebuilding it. In both instances, the company reportedly stopped all operations until investigations were conducted into the cause of the explosions.

Regardless, Garza and other area economic development professionals said the company could transform the area.

“This could be where we leave to spread humanity through the whole solar system,” he said.

Whether Boca Chica Village will be a part of that transformation is what Goetsch’s neighbors worry about.