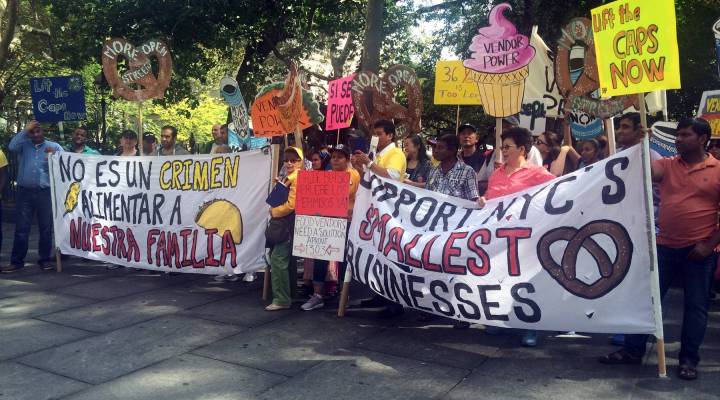 COPY
A group of vendors gathered at city hall in New York City in 2017 to urge city council to pass a measure to increase the number of food vendor permits.  Beenish Ahmed/ for Marketplace

A group of vendors gathered at city hall in New York City in 2017 to urge city council to pass a measure to increase the number of food vendor permits.  Beenish Ahmed/ for Marketplace
Listen Now

Selling food on the streets of New York City might seem like an easy way to make money, but it’s an almost impossible gig to land — legally. The number of legal street food vending permits issued in the city has barely increased since the 1980s.

Those who hold permits resell them to those who hope for some legal cover as they sell plates of biryani or bags of mango slices. It’s illegal to resell permits, according the the city health department, but it’s also enormously profitable. Original permit holders charge as much as $25,000 for a permit purchased for a mere $200.

Street food vendors like Khalid Mohammad say they can’t keep up. Mohammad had just opened his food cart on a Tuesday evening when customer Pamela Aguirre asked him the price of a hot dog. Though he charges $3 now, Mohammad said he only charged $2 for a hot dog about a decade ago but costs have gone up —and not only for buns and ketchup. The price he pays for a street vendor permit has gone up a lot too.  Since permits need to be renewed every two years, vendors wind up paying permit holders more and more with every renewal.

The New York City Council was debating an ordinance that would eventually double the number of street food vending permits, but it died after an 11th hour push at the end of 2017.

“Don’t do this,” Dan Biederman recalled telling members of the city council along with other business leaders. “Don’t take a lousy program and double the size of it.”

Biederman, an urban revitalization expert who founded Biederman Redevelopment Ventures, said the carts need stricter regulation on everything from their appearance to sanitation — but adding to their numbers would only make that harder to do.

“If the carts were the right size and were attractive and followed the laws,” he said, “I could see maybe one per block.”

But not everyone agrees with Biederman. Cesar Boc is a community organizer with the Street Vendor Project, an organization that’s spent years advocating for more street food vending permits.

“If the bill would have passed it would have made a difference in so many people’s lives,” he explained.

He said operating a food cart is a lifeline for low-income immigrants — and he’ll keep pushing to have more permits so they can work legally.

More than 1,600 applicants are on the waiting list for legal food vending permits in New York City. The city health department said that some applicants have been waiting for more than a decade.