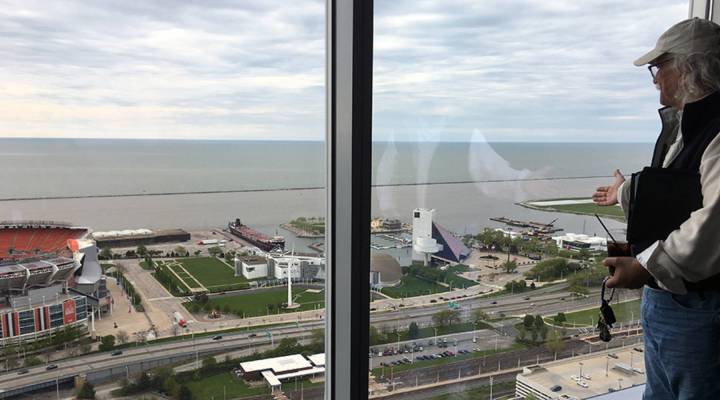 The city of Cleveland, which sits on Lake Erie, has embarked on a sprawling waterfront development project. But Cleveland faces obstacles that are common in any town or city built along water: How do you retrofit an old industrial city?

Today’s version of Cleveland’s waterfront, with a new restaurant, museums and a park, has been a work in progress for a while. The land was first developed for industry — there’s a port where barges drop ore for the trip to the steel mill upriver and a municipal airport built on top of a landfill.

And in 2014, the city picked Richard Pace, a local developer, for the next stage of development.

“Everybody has always felt that downtown lakefront needs to be redeveloped, and we need access,” said Pace, whose plans include two corporate headquarters, 1,000 apartments and a school next to the Browns’ football stadium.

But one of his biggest problems: the freeway and railroad tracks that separate this stretch of waterfront from Cleveland’s booming downtown.

The view looking down Ninth Street from downtown toward Cleveland’s waterfront. Developers and city officials are hoping to add more pedestrian-friendly access to the lake.

“Waterfront development, like any other big undertaking, can take decades,” said Ann Breen, co-founder of the Washington, D.C.-based Waterfront Center.

Breen has consulted with community groups for decades. She said industrial-era obstacles are found along rivers, lakes and oceans nationwide.

“The uses that waterfronts were put to many years ago — like railroads, highways, dump yards — major industrial uses that have become deindustrialized and are sitting there vacant,” Breen said.

Then there are often disagreements about how best to use the land. In Cleveland, some favor private development. Others, like longtime waterfront advocate Dick Clough, would like to see an emphasis on public access to parkland.

“Our view right now is to try to get people to imagine the possibilities,” Clough said.

His group proposes opening up prime parkland by moving about a mile of Interstate 90 away from the waterfront. The new route would reconnect two parks cut in half when the freeway was built. It would cost about $150 million, and it could take 10 years, a reasonable time frame when it comes to waterfront redevelopment.