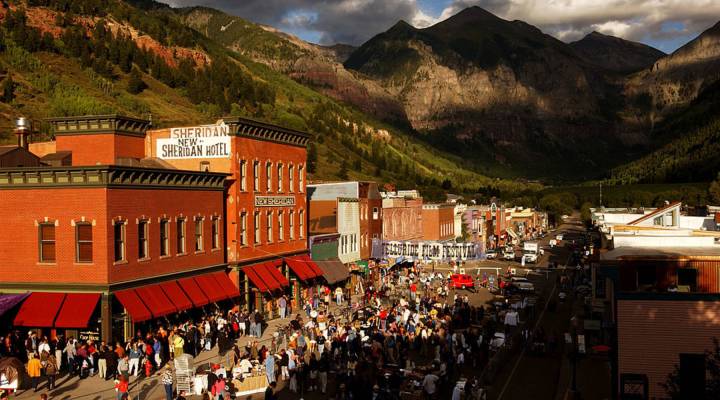 COPY
Crowds gather at a film festival in Telluride, Colorado. David McNew/Getty Images
Brought to You By

Tourists and partiers are pouring into Las Vegas this weekend for the annual music festival known as EDC. Last year, EDC drew an estimated 400,000 people in attendance and generated millions for Las Vegas’ economy. But big cities like Vegas aren’t the only places cashing in on summer festivals. From big events like EDC to small ones like the Washboard Music Festival in Logan, Ohio, or the Northwest Garlic Festival in Ocean Park, Washington, festivals are opportunities to bring communities together and drum up revenue for local businesses.

For the latest summer installment in our series “Brought to You By,” Marketplace host Molly Wood talked with Rachael Carter, an economist with Mississippi State University’s Extension service who studies the economic impact of Mississippi town festivals. The following is an edited transcript of their conversation.

Molly Wood: So, you are based in Mississippi, and I understand that festivals are a big deal there, right? Is it a bigger deal than other states?

Rachael Carter: Well, there are hundreds of festivals in Mississippi. They’re a part of our culture, and they’re just a way for people to bring in tourists and showcase what their towns are all about. For example, Vardaman, Mississippi, they’re the sweet potato capital of the world, and so they have a sweet potato festival. That’s how they generate their livelihood in that community, and so they celebrate that.

Wood: And why are there so many festivals, not just in Mississippi, but in little local communities? I mean, I grew up in Montana. We travel for Railroad Day, which is in a town of like 300 people. Do festivals bring in money for towns?

Carter: Absolutely. You see varying economic impacts from different types of festivals. For example, the Peter Anderson Arts and Crafts Festival, we just finished a study for that and this year their economic impact is just a little over 24 million in two days.

Carter: So, that’s huge. People always say “Whoa, oh my goodness, I can’t believe that small Ocean Springs can generate that!” But they can because they have the local businesses to support it. I always caution towns, though, if you have a very small town, you have to have very good relationships with the local merchants, because if the local merchants are aware that there’s a festival going on or some type of an event, then they can prepare their businesses to be able to benefit from that. For example, if they know that there are going to be a lot of people at an event in Mississippi in August, you need to make sure that you’re able to sell cold beverages, that you have sunscreen available, things that tourists would want to make an impulse purchase from.

Wood: But what are some of the costs associated if you’re town a and you’re thinking about putting on a festival? I imagine you could get yourself into trouble if you didn’t plan carefully, right?

Carter: Yes. You have to definitely have a budget and know exactly who you’re trying to reach. But the cost associated are also things that might not go into the budget, such as increased police force, you’re probably going to have to close some streets, you’re going to have to make sure that there are public facilities available for people, things like that.

Wood: Rachel, let’s talk about the social and community benefit of a festival. Obviously, there can be an economic benefit, but does the community element build over time and provide other positive impacts for community?

Carter: Absolutely. What it can do, is it can create something that the community can identify with and say, “I’m from X-Y-Z Town,” and people say, “Oh, that’s where you have this type of festival,” and that builds a sense of community pride. And we really see the festivals that are more successful rally around that and offer something for the local community and a reason for them to become engaged and participate. And so, a community will start an event wanting it to be just a tourism event, but they end up sometimes, in order for it to be successful, it has to have that local connectivity.

Wood: When I was growing up, I used to go to the Albuquerque Balloon Fiesta because my grandparents lived there. And I will tell you that to this day, I still tell people if they say they’re going to New Mexico, I say, “You have to go in October and go to the Balloon Fiesta!”

Carter: There you go.

Wood: Stuff sticks with you!

Carter: Now I want to go do that one.