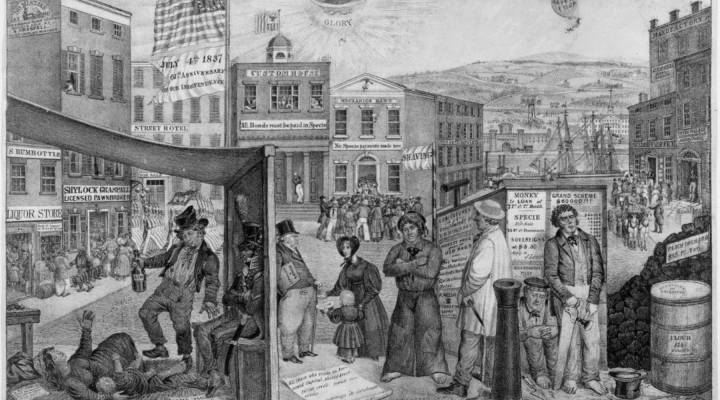 COPY
“We haven't sorted out whether we want to be a country based primarily for the individual or for the society as a whole, and that really does stem back at least to the 19th century and probably even earlier than that,” said Philip Gura, author of the book, “Man’s Better Angels.” Wikimedia Commons

“We haven't sorted out whether we want to be a country based primarily for the individual or for the society as a whole, and that really does stem back at least to the 19th century and probably even earlier than that,” said Philip Gura, author of the book, “Man’s Better Angels.” Wikimedia Commons
Listen Now

You may have slept through the lesson your U.S. history class gave on the Panic of 1837, but it’s a prophetic subject given the stark similarities it shares with the Great Recession.

Back then, a booming American cotton industry drove banks to lend money to land prospectors, which in turn, created a land bubble.

Then that bubble went bust.

Philip Gura, who teaches English and Comparative Literature at the University of North Carolina, addresses this theme in his book “Man’s Better Angels.” He joined us to discuss his book with host David Brancaccio. Below is an edited transcript of their conversation.

David Brancaccio: Professor, back then cotton markets were booming — easy credit flowed to produce what, a bubble in land prices?

Philip Gura: That’s right. People were investing in more land to plant more cotton, and before you know it, a depression was spreading through Europe and England and people began calling in the debts and the cotton prices began to plummet. And that just began to kind of run on the banks and a ripple effect that brought the country into really what historians consider the first Great Depression.

David Brancaccio: With the terrible dislocation that follows these financial messes, you get a reappraisal. People try to figure out how to fix the system. What were some of the thoughts that followed the 1837 episode?

Gura: There was a great debate over whether the system should be fixed by the reformation of individuals, or whether that you actually had to have a larger stage or a political action to solve some of these economic problems. And everyone danced around the fact that really it was the economy. It was the business of cotton that was, of course, running on a slave economy that was the real issue. But instead, they looked inward. They thought that, in fact, in a country that stressed individualism, self-reliance, you had to sort of fix the person first, and the system after that would somehow get back on track. Someone might stop drinking, someone might finally realize through his phrenological reading that he was a little too greedy, so he would try to reform that. But what did that have to do with the major problems in the country? So it was this business of the individual conscience as opposed to any kind of larger state action that really caused the kind of paralysis that occurred during these years. Nothing happened, nothing changed.

Brancaccio: In the 19th century context, who went beyond this notion of, “Well, if just individuals fix themselves.” Who saw it more systematically?

Gura: Well, I think what was being sorted out really was the role of political parties, and it wasn’t really until the 1850s with the rise of the Republican Party who realized that slavery had to end soon, that you had concerted action being taken. And finally of course that led to war. But the notion that you could somehow get rid of slavery if you just reached individual consciences essentially became bankrupt during this period I’m talking about. It was a wonderfully quixotic notion that really just fix your moral compass and finally people will begin freeing the slaves and would have a different kind of system. That really wasn’t the case. So unfortunately, because of the failure of these different kinds of individualistic reforms, you literally lead the country into some kind of cataclysm and civil war.

Gura: That’s right. And again, if something had been done incrementally from the 1830s on, if people really would recognize that you couldn’t keep the economy running on this kind of system — particularly in a country that purported to be a democracy — things might have been fixed earlier. But instead you look for the easy fix. You look internally, you say, “Well, if I stop drinking alcohol, I’ll get myself on track.” That’s finally a way of making yourself feel good, but not really solving the problem. And I think a lot of our fixes in culture today are the same thing. If you do enough yoga, if you do meditation, if you look at crystals, somehow you’ll be healing yourself when in fact the larger issues in the country at large remain right in your face.

Brancaccio: If you buckle down and stop drinking sugary drinks, we’ll deal with the diabetes epidemic.

Gura: Exactly. And then of course, you have those who would say the government has no right telling me that I can’t drink or I can’t smoke or I can’t hold a gun. We haven’t sorted out whether we want to be a country based primarily for the individual or for the society as a whole, and that really does stem back, at least, to the 19th century and probably even earlier than that. I mean, Jefferson essentially says we’re all created equal. We’re on the starting line, let’s start running, let’s run towards some kind of goal. Well, in that kind of system you’re gonna to have people, in fact, who fall behind, who aren’t going to be able to make it. So what responsibility do the others, and by extension the government, have in that kind of case? We’ve never rested easy with the notion finally that there should be help coming from the national level.

Brancaccio: In the title “Man’s Better Angels,” who are some of the angels?

Gura: Well, the angel is that within you which you have to access. And these people essentially thought that we were somehow given by our creation, by God, an eternal sense something that really would guide us properly if other things didn’t cover it up or if other things didn’t bury it. So the angel — is something within that gets buried by the economy, that is buried by greed, gets buried by the kinds of things that pull us away from our better selves.