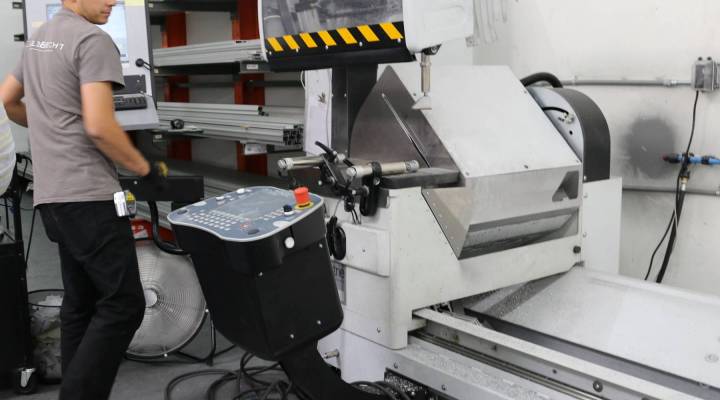 Despite claims of the demise of manufacturing in the United States, the industry is still a force in the American economy. According to the Federal Reserve, manufacturing in this country makes up for about 12 percent of gross domestic product – that’s even with all the jobs that’ve gone overseas and technology having changed the way make a lot of things.

Los Angeles is the biggest manufacturing hub in the country — with more than half a million manufacturing jobs here, making almost everything you can think of.

Goldbrecht-Systems USA is in Culver City, CA. The company makes oversized windows, advanced sliding glass doors and other window designs. The production floor is a clean, well-lit space, manned by 32 workers and computer-aided machines, or CNCs.

“It’s basically a computer programmed system that is extremely precise — almost like a robot, if you want,” said James Tschortner, CEO of Goldbrecht-Systems USA.

Tschotner on what kind of training his employees have:

It’s a mix of high school and college. So, depending on what you do, if you’re basically just a helper and you’re moving around things from A to B, and sorting things, typically those gentlemen here would have a high school degree. Whereas when you’re actually operating these CNC machines, you’re doing a bit of programming, you have to enter everything very precisely, you have to do some counting, a lot of thinking. You need some training for that.

On labor and hiring challenges:

We do, unfortunately, get a lot of applicants who do not really qualify. We find it hard to find, you know, the people with the right training. We would hope for a bit of reform in the education system, where the quality level is really brought up. And I think that’s really important for Los Angeles, in general, or the whole country with competition, and manufacturing competition coming from Asia where, my personal feeling is, people tend to be more qualified. You can’t keep jobs with an unskilled labor force. And I think we have too much of that in this city for sure. And not enough is being done in that respect, as far as I’m concerned.

On what could happen if America can’t produce a skilled labor force:

In this particular shop, we would start using more machines to replace the people because the machines take more care, they’re more precise, they’re more reliable. The machine is programmed, so it’s educated. And that’s really what’s going to happen.  Now, in our case, we would never have our production go to China, for example, that’s the big thing. But it doesn’t make sense for us. It’s too far away from our market. You know, we might have a factory there that will take care of the Chinese market. Just like this factory just takes care of North America, we have another one in Europe, or several in Europe; one in Switzerland that takes care of the Swiss and German market. So, that wouldn’t make sense for shipping and logistic purposes. But I can imagine a lot of products, unlike ours, where lead time is not such a big concern, where you can stock the products as it is, in a warehouse— those jobs are going to go to China.