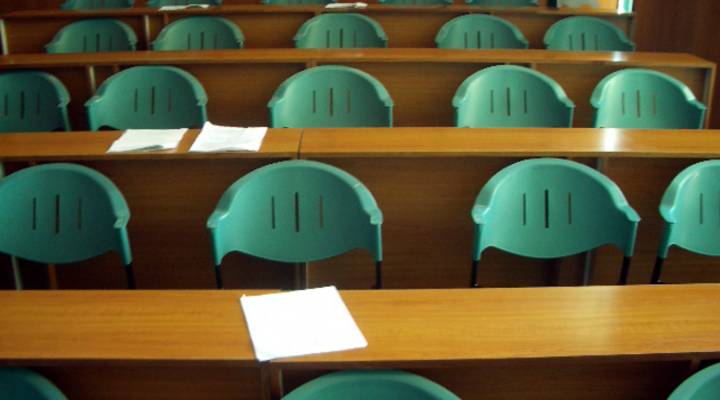 High school will keep starting too early. Here’s why.

COPY
The American Academy of Pediatrics is the latest group to declare that most middle and high school classes start too early for teenagers to properly function. Eric James Sarmiento/Via creative commons
Learning Curve

High school will keep starting too early. Here’s why.

The American Academy of Pediatrics is the latest group to declare that most middle and high school classes start too early for teenagers to properly function. Eric James Sarmiento/Via creative commons
Listen Now

The American Academy of Pediatrics has joined a chorus that’s been growing louder for years: The school day should start later for teenagers because they aren’t wired to go to bed early — and they need their sleep.

The AAP says this is a public-health issue: Sleep-deprived teenagers are more likely to crash cars, get depressed, and become obese. Also, they may not do as well in school.

However, early start times aren’t going away quickly, and probably won’t, because of the costs.

That’s surprising because, from the outside, the economics of a later start-time seem pretty good. A 2011 study from the Brookings Institution looked at three ways school districts could improve just by getting better organized. Starting school later for teens was number one.

“Among all the things schools could do to increase student performance, this is one of the less expensive ones,” says Brian Jacob, an economics and public-policy professor at the University of Michigan, one of the study’s co-authors. “This is not like hiring extra teachers to reduce class size, or building a big new expensive building.”

School boards often hear objections about disruptions at the other end of the school day: Kids getting home really late from sports practice or chess club. Or not being able to work after-school jobs.

The big issue — the expensive issue — is transportation, says Kristen Amundson, executive director of the National Association of State Boards of Education. Amundson is a former member of the school board in Fairfax County Virginia, which is ground zero for debates on school start times.

The debate started there when Amundson was serving, back in the 1990s; buses were the sticking point.

“How school districts make school buses pay is, you basically use the equipment as much as you can,” Amundson says.

Meaning, the district runs each bus multiple times every morning. High school students typically get picked up on the first run, which can happen before sunrise for part of the year.

Asked why little kids, who tend to be early risers, couldn’t start early, Amundson laughs. “Oh, no, that was a non-starter,” she says. “There were exactly zero of us who were prepared to have five year-olds on the street in the dark.”

She says later start times probably work better for smaller districts, with fewer buses to run.  Fairfax County’s School Board is scheduled to vote on a later-start proposal in October.