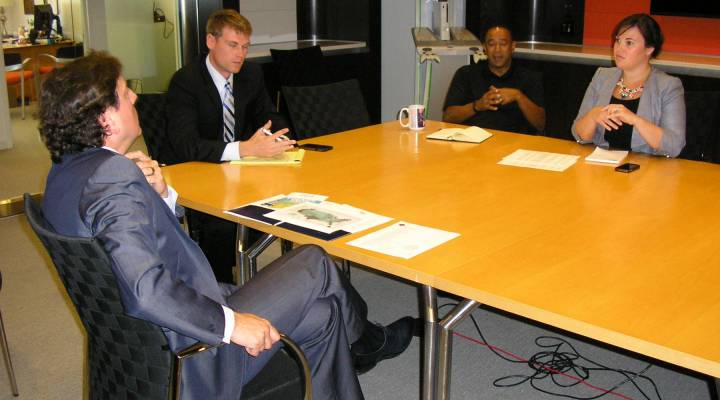 Video game lobby answers ‘call of duty’ on the Hill

Video game lobby answers ‘call of duty’ on the Hill

A “Donkey Kong” champion and “Madden” addict, he’s now chief lobbyist for the Entertainment Software Association, the main trade group for the gaming business in Washington.

“I feel like Mario the fix-it man, the plumber, making sure things flow correctly. But I think more often than not, I feel like Sonic the Hedgehog, running around with frenetic energy,” he says.

Huey and his staff have just finished discussing a plan to highlight gaming industry jobs in congressional districts.

Now, Huey is off to the corridors of Capitol Hill, first to visit Rep. Joe Garcia, then Rep. Jim McGovern.

Members of Congress listen to Huey. The Center for Responsive Politics says the Entertainment Software Association spent almost $5.5 million on lobbying in 2013.

Scrolling through spending reports, Novak says there was a spike in the video game lobby’s spending as Congress considered a bill mandating research into whether violent video games cause actual violence.

“Almost half of their reports in 2013 mentioned the Violent Content Research Act. It’s clearly something they were very concerned about,” says Novak.

The bill is now stalled in the Senate.

The video game industry has lobbied on online piracy and privacy, too. And it’s not just relying on shoe leather. The lobbyists are trying to get gamers to help make their case online. But it’s not easy.

“It’s a little bit like herding cats with a dog in the room,” says Andrew Rasiej, the founder of  Personal Democracy Media, and chairman of an annual conference on politics and technology.

When a congressman recently made disparaging remarks about gaming, Huey says thousands of group members responded.

“Four thousand constituents calling in — that’s quite powerful,” he says.

Huey says when it works, the Video Game Voters Network can be a potent weapon. Most other lobbyists don’t have such an active, online base that’s used to combat. Or, at least virtual combat.