Kai Ryssdal: If you’re going to escape to the movies for a couple of hours this weekend, consider this as you line up for your popcorn. It takes a lot of stuff to provide that escape. Big stuff — like dining room tables and bedroom sets — and small stuff too — like houseplants and old books. Props, in other words. When filming ends, some of those props go into storage. Some go home with the cast, some end up in the trash. And others are slowly becoming available.

Radke: I will take it. And I will make good use of it.

Stephanie Hughes: Eva Radke is standing in a truck outside her boutique thrift store in Queens.
She’s talking with Russ Detrus, who just delivered a shipment of goods from Nickelodeon.

Radke: This is a purple arm chair, very funky. And there’s a nice little lime green couch that goes with it, too. It could be great for either a kid’s room or a lounge or something that just needs a pop of color.

Radke’s store is called Film Biz Recycling. Everything she sells is discarded from the entertainment industry. She worked for years in the business as a set decorator and production coordinator. When each production ended, she says a lot of the props were thrown away.

Radke: Furniture, clothing, live plants. I still think about things that I couldn’t save, that I couldn’t find a home for. I had one day, and I had to be off the stage. The clock was ticking. There was no other home for it except that dumpster. They’re coming in the morning at seven o’ clock and we will be off.

Radke wanted to give those props a second home, so she created a non-profit store. Productions get a tax write-off when they donate to her. That means you can score some pretty glitzy stuff. I spotted a black-and-white striped chair I recognized from the set of “America’s Next Top Model.”

Radke says one of her customers was thrilled to learn the back story of her recent purchase.

Radke: She bought a pillow from us, and then she went to go see “Sex and the City 2” and she saw Carrie Bradshaw holding it, and she was like, “Oh my gosh! that’s my pillow!”

Film Biz Recycling is one of several businesses that’s making use of the film industry’s leftovers. A company called Strike it Green has launched in New Orleans. In Los Angeles, Lauren Selman runs the environmental consulting firm Reel Green Media. She says in Hollywood, a lot of props go back into storage, but there’s still plenty of waste. She’s trying to develop a system for reusing those unwanted items.

Selman says the American film industry could take a cue from other countries, and start designing sets with an eye towards where they’ll end up.

Selman: With the companies that I’ve spoken to in Bollywood, they have to repurpose all of their stuff. They don’t have enough money to necessarily get a new set or build a new set. So kind of really looking at sets as a way of repurposing, but also just being resourceful.

And that’s a model some American films are trying to emulate, especially the small ones that are on a budget. Back in Queens, customer Laura Miller was at the store, buying old props for use on a new film.

And for the rest of us, it’s always nice to score a bargain — especially on something that’s had a moment in the spotlight. 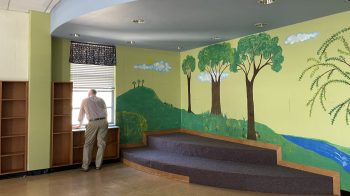