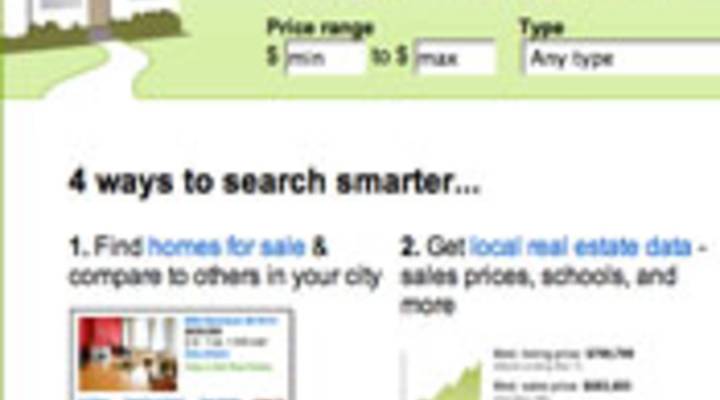 Kai Ryssdal: One of the fundamental problems the internet poses is this: what’s a legitimate use of your time online and what’s just frittering away hours you could more profitably spend doing something else?

Everyone’s got their favorite web-based time-waster. For many homeowners, it’s a site called Zillow.com, where you can get the company’s take on how much your house and millions of others across the country are worth — not as much as they were a couple of years ago, as we all know.

Ryan Flegal: Let’s go ahead and look at an address for a property in Malibu…

Stacey Vanek Smith: Real-Estate Broker Ryan Flegal has been using home estimate sites since he got into the business five years ago.

That would be the “zestimate.” And not too long ago, zestimates were the talk of cocktail parties everywhere. People started zillowing neighbors, bosses, celebrities. Los Angeles journalist and blogger Erin Kotecki Vest says she became a Zillow addict when she started thinking about selling her house:

Erin Kotecki Vest: I started using Zillow to see what homes in the area were selling for as well as what my home was doing, watching it go up, up, up, up and they send you emails that tell you “you’ve gone up 20 percent, you’ve gone up 15 percent” So back two-and-a-half, three years ago, Zillow was great.

Investors thought so, too. Venture capitalists poured tens of millions of dollars into Zillow and other online real estate Web sites like Trulia and Redfin. Economist David Lereah is with Realtor.com. He says sites like his took off when people started seeing dollar signs in their houses:

David Lereah: People started building a lot of wealth in real estate, so they were very, very focused on “what’s the value of my home right now? Is it up 20 percent? Is it up 30 percent? Can I refi and take some cash out?” That’s why these sites got very active.

Then the housing market turned south. You might think that would be the death knell for these Web sites, but actually, they are seeing more business than ever. In the last year Trulia’s traffic has tripled and Zillow’s ad revenue has more than doubled. Zillow CFO Spencer Rascoff says it makes sense.

Spencer Rascoff: The buyer three years ago, let’s say they were looking for a home for $600,000 dollars, it was just a question of “do I bid 620 or 640?” They weren’t consuming a lot of information, whereas today, where it’s a buyers market, you have buyers poring information, downloading things into spreadsheets, desperately trying to figure out exactly what they should pay and on the sell side, it’s the same thing.

Sites like Zillow are scrambling to provide new statistics and services for information-hungry consumers. Zillow has launched “Make Me Move,” which lets people casually post their home at a dream price… Trulia has added social networking applications, so people can trade anecdotes and get advice from experts. Realtor.com has invested heavily in making online estimates more accurate. Homeowner Erin Vest says she has come to count on these resources, especially since her mortgage company hasn’t been so helpful.

Vest: It only serves to empower you. Without having that readily available, I’m really not sure what people would be doing right now.

Other homeowners are using realty sites to see what kind of equity they still have in their homes and to make decisions about loans. After all, Americans are expected to lose around $3 trillion in home equity over the next few years. But broker Ryan Flegal cautions against using these sites to make any major decisions:

Flegal: If you’re going to take the number that the computer spits out at you seriously and really have an emotional stake in that number, don’t check it. The margin of error is enough that it will make a difference in whether or not that’s a smile or a frown on your face. It’s still just a computer. It’s not a person whose walked through the house and knows the neighborhood.

Flegal says online estimates are regularly off by as much as 30 percent.