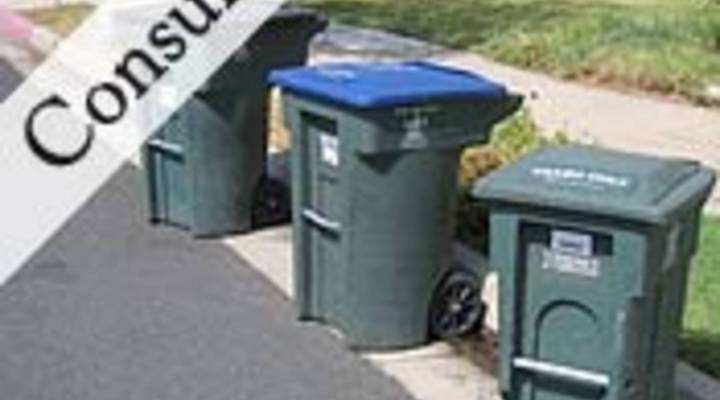 COPY
Tess Vigeland's trash awaits curbside for the arrival of her garbage truck driver -- and a journey to her trash's final destination. Tess Vigeland
Consumed: Part One

Tess Vigeland's trash awaits curbside for the arrival of her garbage truck driver -- and a journey to her trash's final destination. Tess Vigeland
Listen Now

Tess Vigeland: It’s trash day in Pasadena, California, my town. Block after block, the streets are lined with green garbage bins, blue recycling bins and black bins for yard waste. It’s pretty much the same across much of the country. Four and a half pounds of trash per day — per person.

And no wonder. To consume more and more every year, we have to toss last week’s stuff away.

But where is that “away” place our trash goes?

Well first, of course, it goes into the garbage truck. I hopped a ride with my integrated waste management representative a few weeks ago … OK, we’ll call him the garbage man. John Wilucz doesn’t mind.

John Wilucz: You OK there?

As we roll along I tell Wilucz that our question of the day is: what — exactly — is wrong with trash? The rest of us live with it; he lives it.

Wilucz: Well, there’s nothing right or wrong really — it’s a fact of life.

True enough, but it’s become vastly more so over the last four and a half decades. Since 1960, America’s population has grown by 60 percent, but the amount of garbage we generate has grown 180 percent.

Wilucz says he’s seen that happen on a smaller scale on his route. More and more trash over a quarter century of collecting Pasadena’s debris, scrap, slop and other waste.

He’s been going by my house for the last 15 years.

Vigeland: Alright, here we are at my house.

Wilucz: Yeah, your cans are nice and well-spaced — plenty of room.

Vigeland: Thank you. We try.

Wilucz: OK, you haven’t lived there that long, huh?

Vigeland: About three and a half years.

Wilucz: Yeah, I got my barbecue from that house. You know, she brought it out to the curb and she wanted somebody to take it, you know. Looked in pretty good shape, I’ll take it. Took it home and I’m still usin’ it today.

John does a lot of curbside recycling on his route, as well as filling the recycling bin at home. He’s convinced that the rest of us want to do the right thing too as long as it’s not too time-consuming.

And national figures suggest he might be right. Recycling — including composting — kept some 80 million tons of trash out of landfills in 2005. That’s a giant leap in just a couple of decades.

But Wilucz has noticed that people play fast and loose with their definitions of what’s recyclable. He’s found everything from dead animals to a boombox and speakers in recycling bins.

Wilucz: I don’t know how people think a boombox would be recyclable. So ridiculous. I used to do yard waste and I swear people think if it’s outside in the yard, it can be thrown out, so they put hoses in there, statues, pots. Ha ha.

He laughs, but still wonders whether anybody ever thinks about where all their discarded junk is going or what happens to it when it gets there — like turning into greenhouse gases: landfills are the largest human source of methane in the U.S.

We don’t see the methane, but we don’t really see the trash either after it leaves the curb. It just kind of disappears. I asked him whether that makes it easier for all of us to just keep buying and consuming and then tossing our stuff away.

Wilucz: I don’t think so. We will run out of space, and how we deal with it may be more the question we need to address.

Here in Los Angeles County, half of our landfills are slated to close in the next decade and a half, including the largest one in the country, Puente Hills.
They’ll all be closed by 2053.

OK, so none of us can throw anything out — ever again.

After a morning driving around my small neighborhood, John and I headed to the nearby Scholl Canyon landfill, the final resting place for my trash.

If you’re imaging a picture of the old town dump, that’s not even close to what’s really here. Scholl is a modern landfill high on a sagebrush-covered hill with a view clear to the ocean.

Wilucz: They’ll probably end up making a golf course out of it.

In the end, we’d picked up five and a half tons of garbage. It took less than 30 seconds to empty that load onto the day’s pile at the landfill.

Wilucz: Well, have you had enough?

Vigeland: I think I’ve had enough trash for the day, thank you.

Vigeland: So that’s it — that’s the journey of my trash?

Wilucz: That’s the beginning and the end.