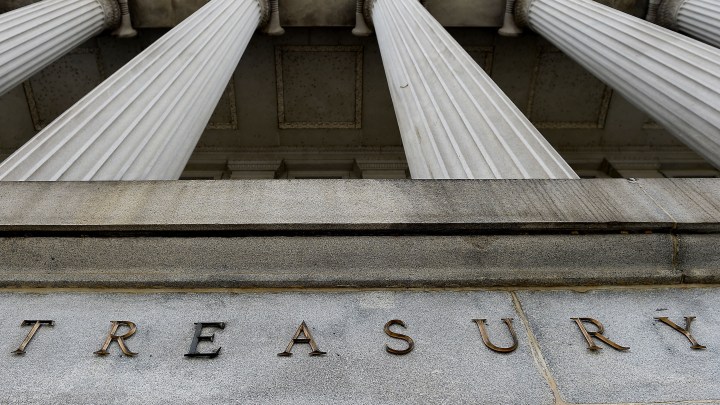 COPY
One reason China may be shedding U.S. Treasurys is to control the depreciation of its currency, the yuan, which has lost value as the dollar has strengthened. Olivier Douliery/AFP via Getty Images

One reason China may be shedding U.S. Treasurys is to control the depreciation of its currency, the yuan, which has lost value as the dollar has strengthened. Olivier Douliery/AFP via Getty Images
Listen Now

The share of U.S. government debt belonging to China has dropped below $1 trillion — the lowest level in 12 years. China has been a big buyer of U.S. debt. So what’s behind the change?

China’s economy has slowed down considerably in recent months.

“You’ve had entire sectors of the economy effectively grind to a halt,” said Gennadiy Goldberg of TD Securities.

Now, Goldberg said, China is shedding U.S. Treasurys to defend its own currency, the yuan, which has lost value as the dollar has become stronger.

“What China wants to do is actually manage some of the pace of that depreciation. One of the ways that they do it is by selling the dollars and buying yuan.”

The retreat of one of the largest buyers of U.S. Treasurys could bolster the Federal Reserve’s efforts to push interest rates higher to cool the economy, Goldberg added. But it may also lead to tighter financial conditions than Fed policymakers want.

Moving away from the dollar isn’t easy, though.

“The fundamental issue is what do you do with a trillion dollars? There just aren’t a lot of markets into which you can safely put a trillion dollars,” said David Dollar of the Brookings Institution’s China Center.

According to Dollar, a big reason for China’s shift comes down to politics. “They’re unhappy with the way the U.S. keeps using financial sanctions around the world.”

Such as excluding many Russian banks from the SWIFT international payment system shortly after Russia’s invasion of Ukraine, per Thomas Hogan of the American Institute for Economic Research.

“That was a major wake-up call for China and other nations that might not be aligned with the United States in Europe politically,” he said. “They realize that the SWIFT system could be used as a political weapon to harm them economically.”

Hogan expects the move away from U.S. debt will be slow and steady. After all, China won’t want to harm the sizable investment it still has.