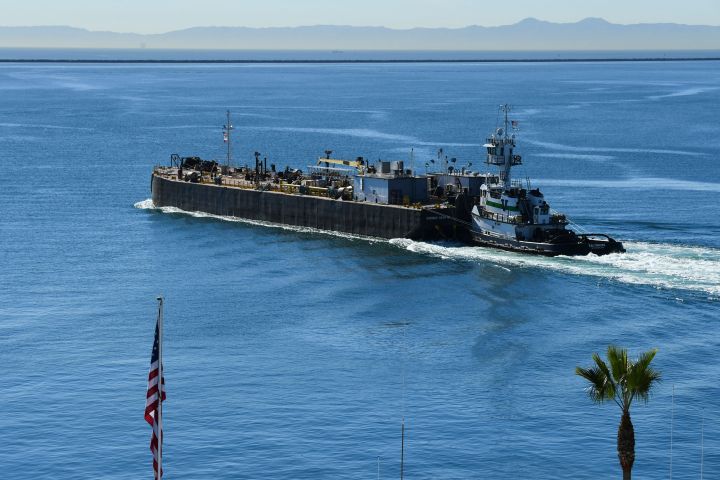 COPY
Austin Golding of Golding Barge Line is trying to manage the impact of high energy costs and find the right people to join his transport company. Patrick T. Fallon/AFP via Getty Images

Last year, Austin Golding, president and CEO of Golding Barge Line, a family business that ships petroleum products across the country, was dealing with the aftermath of Hurricane Ida, along with COVID and making sure his crew was vaccinated.

However, this year has had its challenges as well. Golding said the last few months have been “chaotic,” with inflation the biggest issue. Rate increases have been eaten up by operational costs. “So as the cost of energy has gone up, the cost of our logistics have gone up and then life on the boat is more expensive,” Golding told “Marketplace” host Kai Ryssdal. “Everything from the light bulb to the food in the pantry to the mechanical gear to the bed linens, all more expensive these days.”

Golding spoke with Ryssdal about how inflation and supply chain shortages are impacting his bottom line. The following is an edited transcript of their conversation.

Kai Ryssdal: So it’s been a year almost. And things have changed. Last time, it was after a hurricane, it was in the middle of a pandemic. How are things now?

Austin Golding: Well, you know, things have definitely been chaotic. We’ve seen some recovery in our market. Demand has come back, and things have opened up. But trying to find people and retain our people has been a real struggle, as well as how to try to recoup some of the inflationary costs of just being able to run and operate a towboat-and-barge operation. Everything from the loaf of bread to the gear oil to the replacement paint, everything’s more expensive. So it’s been a real struggle with people and parts.

Ryssdal: All right, well, that was the whole interview in, like, one answer, so let me break it down a little bit. First of all, let’s remind people that you move mostly petroleum products. As we know, petroleum is hot right now. Demand is back for you, I’d imagine, to what it was before and then some.

Golding: It’s definitely back to where it was before. During COVID, there was actually quite a bit of refining capacity that was taken offline or scheduled to come offline. I believe it’s around a million barrels, give or take, depending on which analysis you look at. And, you know, that refining capacity coming offline has limited some of the places that we go, and it’s kind of changed some of our patterns. But really in a very, larger sense, the cost of equipment, the cost of construction is going up, as well as the cost of capital, with interest rates going up and to really push on that, we’re not seeing much new construction at all within our industry.

Ryssdal: So, wait. Does new construction, do you mean new barges and new towboats? Is that what that means?

Golding: Yes, there are new towboats being built, but there are not new large tank barges being built right now. It is a very, very slow time for new construction just because the rate structure doesn’t support it, and the cost of it is the most expensive it’s ever been.

Ryssdal: OK. Next item in your first answer there: labor. We’ve talked a lot, you and I, about labor and some of the challenges both pandemic and pre. Where are you now?

Golding: Well, we’ve seen a wage increase, which I think was due. That’s our first step as a good employer is not just complain about it, do something about it. So we’ve seen anywhere between a 5% and 8% increase in our wages, depending on what level you’re talking about. And we’ve also gotten really crazy with how we recruit. We’re going to rural areas, we’re going to places that may not know about our industry and trying to selectively recruit. But pay increase came first, creative recruiting came second, and we’re hoping that some references and some retention come through after the fact.

Ryssdal: OK, so let’s talk inflation. Rates are going up. Things all over the place are more expensive. Is that hitting you? Gotta be, right?

Golding: Absolutely. Almost every bit of the rate increases that we have seen in our market have been, I like to put it, they’ve been gobbled up from the bottom up by all of our operational costs going up right at the same pace or even faster than we can recoup and with wage increases. We got to remember, we may move gas and diesel, but we move our people around with that gas and diesel and our boats. So as the cost of energy has gone up, the cost of our logistics have gone up and then life on the boat is more expensive. Everything from the light bulb to the food in the pantry to the mechanical gear to the bed linens, all more expensive these days.

Ryssdal: All right. So this is none of my business, but how are you doing businesswise at Golding Barge Line? I mean, are you better off than you were before, not making as much?

Golding: I think we’re slightly more profitable. And the reason we’re slightly more profitable is a kudos to our team during COVID. We learned to run mean and lean. We learned, we learned to be smarter with how we operate, a little more streamlined. And we also saw our business actually increase from the number of customers and the variability of our customers. Since we talked, Kai, we’ve expanded our rock business. We started pushing a lot more aggregate and rock.

Golding: Absolutely. Straight out of the quarry that eventually goes down the supply chain into asphalt and road construction, for the most part.

Ryssdal: Got to diversify, I suppose. Right?

Golding: Yeah, got to. Got to diversify for sustainability and also diversification for the sake of diversification. We like to not be so exposed to some of this oil and gas volatility.