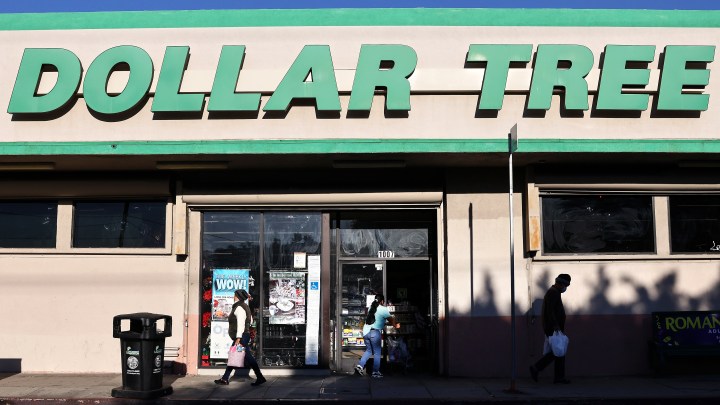 COPY
Dollar Tree said groceries made up a bigger part of its sales last quarter — which could spell trouble for retailers like Walmart and Target. Mario Tama/Getty Images

Dollar Tree said groceries made up a bigger part of its sales last quarter — which could spell trouble for retailers like Walmart and Target. Mario Tama/Getty Images
Listen Now

We got earnings reports from a bunch of retailers recently, including Macy’s, Dollar Tree, Costco and Walmart. It was a real mixed bag. Identifying which retailers are flourishing or faltering tells us something about how consumers are feeling right now.

It’s a pretty easy trend to wrap your head around: When household budgets are under stress, “consumers will pull back on their discretionary spending and only focus their dollars on essential goods,” said Diana Smith, a retail analyst at Mintel.

But healthy earnings from Macy’s and Nordstrom tell a different story. Even though prices are rising, people are still saying yes to dresses. “We are absolutely seeing a group of consumers who are just reprioritizing what ‘essential’ means to them,” Smith said.

It could mean work clothes or wedding attire. Because Smith said there’s still plenty of pent-up demand from people with financial wiggle room.

These are the same people who can afford to buy in bulk. Costco beat earnings estimates last quarter, which it attributes to its keeping gasoline prices a few cents a gallon below average. Two birds, one stone, said Dan Blanchard at the Yale Center for Customer Insights.

“Once they’ve already made the trip to Costco for gas, they’re much more likely to do the rest of their shopping there as well.”

High gasoline prices could be another reason dollar stores are getting a boost (even if their offerings cost more than $1 nowadays). Three-quarters of Americans live within 5 miles of a Dollar General. They’re especially popular in rural areas that don’t have big-box stores.

There’s the obvious draw, Blanchard said: lower prices. “People have this belief that they’re going to be better off retaining their value by shopping there, compared to places like grocery stores,” he said.

Dollar Tree said groceries made up a bigger part of its sales last quarter. According to University of Minnesota marketing professor Akshay Rao, this is a problem for stores like Walmart and Target, which missed earnings expectations. Because when budgets are strained, shoppers are less loyal to stores and brands.

“I can go to the other store and get the same utility,” he said.

So what’s a slumping retailer to do? Push store brands and sales, Rao said. And hope that this period of inflation doesn’t last long enough for consumers to make permanent changes to the way they shop.