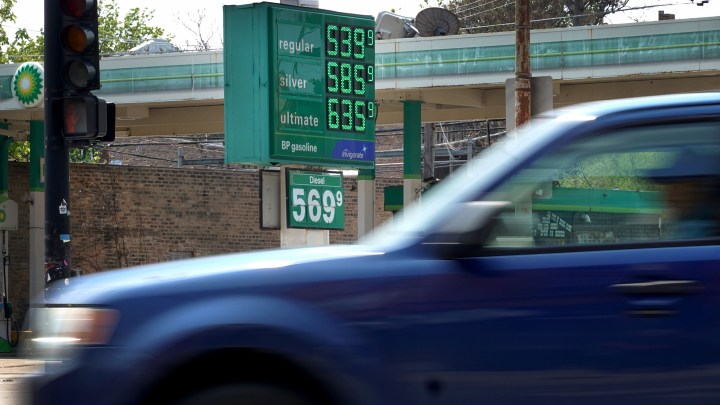 David Brancaccio, Alex Schroeder, and Rose Conlon May 18, 2022
Heard on:

David Brancaccio, Alex Schroeder, and Rose Conlon May 18, 2022
Heard on:

We reported last week on what seemed to be a contradiction in gasoline and oil prices. The price of crude oil has fallen about 13% since hitting roughly $130 a barrel in early March, when Russia invaded Ukraine. At the same time, the price of gasoline at the pump is going up and up, hitting new records on a daily basis, according to AAA. For the first time, gasoline prices are above $4 a gallon in every state of the nation. Not if you adjust for inflation, it’s important to note, but still.

So what’s going on? Well, a big part of the price we pay is the way oil companies have managed their refineries, which churn out the end products. Javier Blas, a Bloomberg Opinion columnist covering energy and commodities, spoke with “Marketplace Morning Report” host David Brancaccio. The following is an edited transcript of their conversation.

David Brancaccio: From the outside looking in, it’s a strange world we live in. I mean, crude prices peaked a couple of weeks after the invasion of Ukraine. But the gasoline prices are not off the peak. There’s almost no connection, it seems.

Javier Blas: Well, there is a connection. Because in between that crude oil, that barrel of oil, and the gasoline that we buy at the gas station, is the oil refinery. And that’s where the bottleneck is right now. We are struggling with enough refining capacity to transform the crude into all the refined products that we need for our cars, for our trucks and our airplanes. And the problem is that Russia is not only an exporter of crude. It was exporting, before the war, quite a lot of refined product, particularly diesel. And that is really what is causing this big shortage.

Brancaccio: Because Russia was not just an oil exporter — we also know it does natural gas — but other products like diesel, and that has somehow fouled up the mix when it comes to the long chain between pumping and getting into your gas tank.

Blas: Exactly. Because if you need to replace a barrel of diesel that previously was coming from Russia, we need to find two things: we need to find extra supplies of crude, which is difficult in the current market but not impossible. And then we need also to find the refining capacity to put those new barrels into a refinery and produce diesel and other refined products. And that’s where we are hitting the wall because there is not much of a spare capacity for refining, particularly in Europe and in the U.S., in part because we have lost refining capacity through pandemic for a number of reasons. Some of those refineries were old and not very competitive. Some of the companies were really struggling and they were not investing in often the refineries. And gas demand really collapsed during pandemic, so the refineries were not needed. It was a good time to shut them down. But now we do really need them.

Brancaccio: It may improve a bit, but do you see some kind of large-scale building program for new refineries? That seems far-fetched.

Blas: Oh, no, we are not going to be building new refineries. And if we were even thinking today about expanding any refinery, that will be resolving a crisis that may happen five years from now, but it’s not going to resolve the current crisis. Gasoline prices and diesel prices are going to be very high through the summer, potentially higher than they are today.