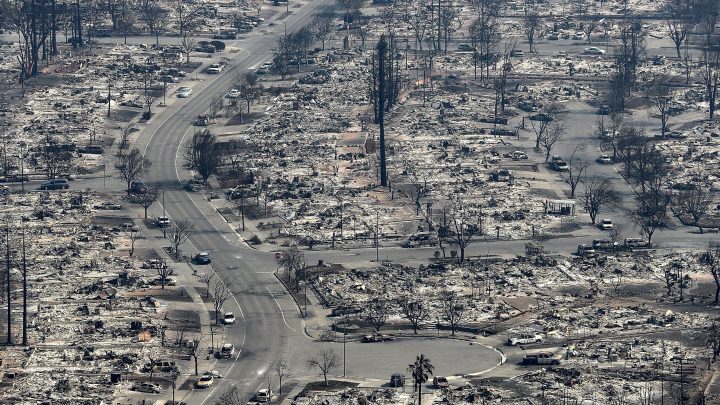 COPY
The 2017 Tubbs Fire decimated neighborhoods. Many people are seeking safer homes as fire risk worsens, but there are few tools to help them. Justin Sullivan/Getty Images
A Warmer World

The 2017 Tubbs Fire decimated neighborhoods. Many people are seeking safer homes as fire risk worsens, but there are few tools to help them. Justin Sullivan/Getty Images
Listen Now

Data provided by a new online tool allows people to see the wildfire risk facing American communities and even specific properties for the first time. The system, from a nonprofit called the First Street Foundation, is part of a growing movement to quantify the risks created by natural disasters.

Tim Halbur lost his mom and dad in a wildfire five years ago. The Tubbs Fire started on faulty electrical equipment before whipping across Northern California’s Sonoma County.

“My parents were definitely a very early victim of this whole climate change concern about fires,” Halbur said. He thinks about that a lot as he looks to relocate from Los Angeles to Portland, Oregon.

“Now, as I house hunt, I’m absolutely considering keeping to very safe areas,” Halbur said. But the tools he has to understand risk are limited.

“I don’t feel like I have that information. Basically I’m looking at Google Maps and thinking, ‘OK, where are the forests? Will the rivers rise?'” he said.

Kimiko Barrett is a lead analyst at Headwaters Economics. She said it’s not just the American West at risk. There’s just more awareness there, given the experience of the last few years.

“And that’s not necessarily the same situation across the country. More than anything, I think it’s just worth knowing that risk is everywhere,” Barrett said.

First Street Foundation, which just released the wildfire risk tool, is among a group of players looking to model climate risk. Matthew Eby started the nonprofit six years ago.

“I can tell you at the beginning, there definitely wasn’t the same level of interest, nor was there the same amount of capital or companies flowing into the space,” Eby said.

He said he welcomes the competition.

Quantifying risk does influence behavior, said Matthew Kahn, a professor of environmental economics at the University of Southern California. “Those searching for housing search for homes that face less risk when they are confronted with this information,” he said. Kahn has an unpaid research partnership with First Street.

Michael Mann, author of the book “The New Climate War,” offered a warning: “The homes that we live in and purchase may not continue to be safe places for us to live in the future.” He said people should factor that into wherever they choose to live.