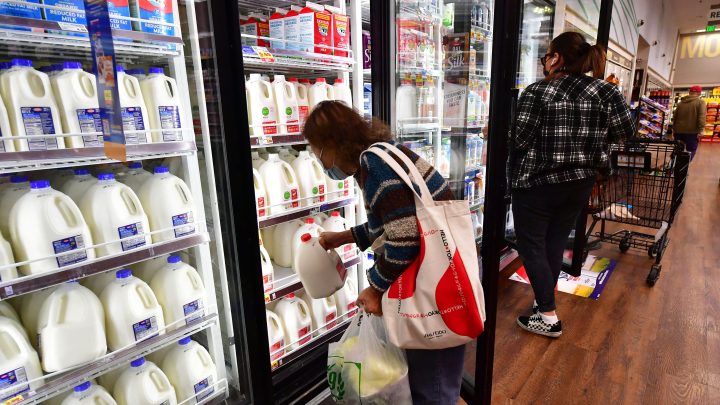 Americans are frustrated with inflation in the prices of everyday items, but deflation would cause its own problems. Frederic J. Brown/AFP via Getty Images

Americans are frustrated with inflation in the prices of everyday items, but deflation would cause its own problems. Frederic J. Brown/AFP via Getty Images

​On Wednesday, the consumer price index for the month of April comes out, and if the numbers are anything like the other commonly used measure of inflation — the personal consumption expenditures index — the CPI will show that inflation is slowing down.

​If that happens, it could mean this economy has reached, and maybe passed, peak inflation. Which means prices will come down, seemingly.

“Heh — that’s really not the way it works,” said Tim Duy, economics professor at the University of Oregon. “Inflation is really the rate of change in the price level. So inflation slowing just means that prices are not rising as quickly as they were last month,” he said.

A slowdown, though, would be part of the Federal Reserve’s goal of keeping prices stable.

Laura Veldkamp is an economics professor at Columbia. She said you can think of the economy as a car driving through a neighborhood, with the Fed at the wheel.

“The Fed wants the car to drive at a really prudent pace through residential neighborhoods and not tear up the streets, but also not drive backwards,” Veldkamp said.

That means the Fed wants a little inflation, just not as much as we’ve been experiencing.

According to Menzie Chinn, an economics professor at the University of Wisconsin, inflation can be a sign that the job market is strong and people feel comfortable spending money.

“You have to think about — well, if I didn’t have the inflation, would I also not have the buoyant economy?” Chinn said.

If prices started falling, that’s known as deflation. The car shifts into reverse … and maybe jumps a curb and knocks over trash cans.

“Deflation is certainly something that’s not desirable for the economy,” said Lydia Boussour, a senior U.S. economist at Oxford Economics.

If prices fall, Boussour said, employers have less money to pay their employees.

“And lower prices also have an impact on consumer psychology. Because they tend to think they should postpone their purchases, you know, waiting for prices to fall even further,” she said.

In other words, it’s not necessarily bad if the higher prices we’re paying are here to stay.