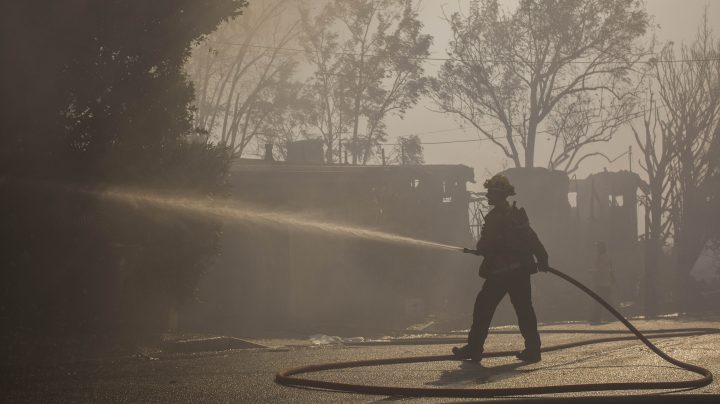 COPY
As the risk for wildfires rises, small cities struggle to find the resources to combat them.
A Warmer World

As the risk for wildfires rises, small cities struggle to find the resources to combat them.
Listen Now

June through October used to be wildfire season, but already wildfires are burning throughout the Southwest. And few communities in northern New Mexico and central Arizona are under evacuation orders. Now, thanks to climate change and the current “megadrought,” the risk is basically year-round.

As fire risks grow more intense and resources to combat them are drying up, cities prone to risk are facing a conundrum.

The Calf Canyon and Hermit’s Peak fire has burned more than 54,000 acres in northern New Mexico, including outside of the small city of Las Vegas.

One problem as the fire season expands is that the federal wildland firefighting system is understaffed.

“It doesn’t pay people a lot of money, and then asks people during the fire season to spend 14 days on, two days off fighting fires all over the country,” said Michael Wara, director of Stanford’s Climate and Energy Policy Program. Making the job more attractive would take a massive federal investment.

And fire suppression is just a small part of the equation, according to Kimiko Barrett, a researcher at Headwaters Economics.

Barrett said most recovery costs are borne at the local level, by local homeowners, businesses and municipal government. Local governments can get out ahead of those costs by retrofitting buildings and infrastructure for fire resilience, she said. But that won’t come cheap, either.

There is a role for both state and federal government to be able to offset the costs for these mitigation measures. According to Barrett, cities like Las Vegas and New Mexico should tap into funding from the federal infrastructure bill as they rebuild.