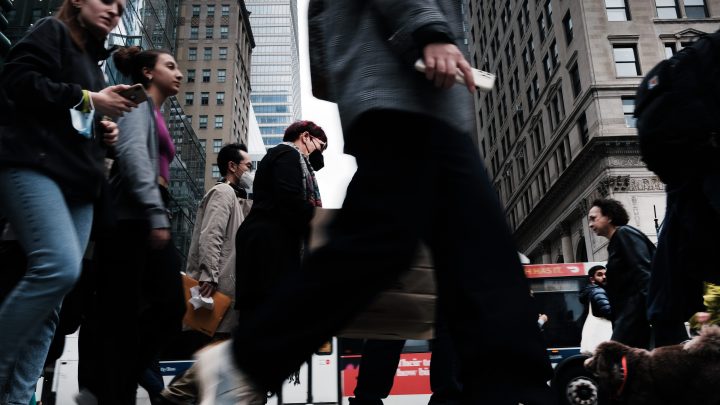 COPY
Payrolls increased by 431,000 jobs in March, and the unemployment rate is almost as low as its pre-pandemic level. Spencer Platt/Getty Images

Payrolls increased by 431,000 jobs in March, and the unemployment rate is almost as low as its pre-pandemic level. Spencer Platt/Getty Images
Listen Now

Over the past three months, the U.S. economy has added 1.7 million jobs and the unemployment rate has fallen from 4% down to 3.6%. ​That is just 0.1% above where it was when the pandemic hit, in February 2020. To find an unemployment rate lower than that, you have to go all the way back to 1969.

​Meanwhile, the number of people working or actively looking for work has been rising steadily. Employers are desperate to hire, and they’re hiking up wages in response.

Twenty-two million jobs evaporated from the U.S. economy after the pandemic started. It was a deep hole to dig out of, but Friday’s employment report shows we’ve recovered more than 90% of those lost jobs.

“Right now we’re about 1.6 million jobs below where we were in February 2020,” said Elise Gould, senior economist at the Economic Policy Institute. She said the U.S. working-age population did grow during the pandemic.

“If we take into account people graduating high school, entering in the labor market — we’re down about 3.4 million jobs. That shortfall, I think, can easily [be] made up by the end of the year, at the kind of growth we’re seeing right now,” she said.

That would be incredibly fast compared to the aftermath of other job-destroying events, like the Great Recession. To keep up this steady, strong growth, we’ll need more people to return to work.

Fortunately, key groups that left the labor force are coming back, according to Curt Long, chief economist at the National Association of Federally-Insured Credit Unions.

“The omicron wave knocked a bunch of young moms out of the labor force, but they have since returned with the moderation in COVID cases,” he said. The reopening of schools and day care centers has helped, he said.

Many older people stopped working for fear of getting COVID, but “a lot of those folks have come back out of retirement and are reentering the labor force,” Long added.

The continuing surge in consumer spending — especially for in-person services — is driving demand for labor to come off the sidelines, according to Kate Bahn, chief economist at the Washington Center for Equitable Growth.

“Particularly at the low end of the spectrum for workers, bringing them in and giving them a little bit of wage growth,” she said.

None of this is to say that a big wrench couldn’t jam the works of this strong job market, said William Rodgers at the Federal Reserve Bank of St. Louis.

He put three risks at the top of the list: “What happens to the path of inflation, any more variants from COVID and then the longer that the conflict that we’re seeing in Ukraine continues.”

So far, none of these potential risks seems to have slowed the pandemic jobs recovery.