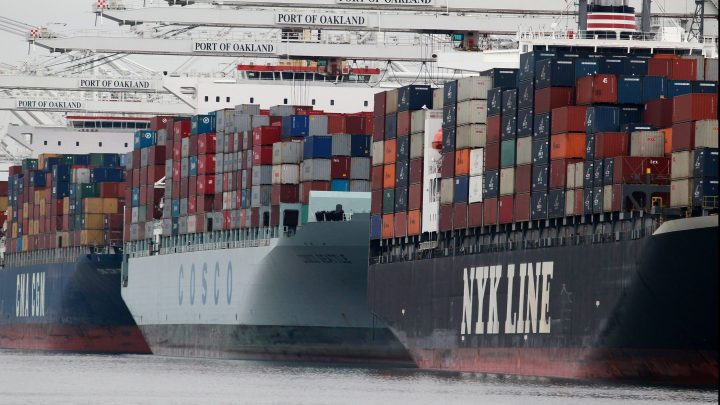 The Russian invasion of Ukraine and the sanctions placed on Russia by the West are putting supplies of steel, palladium and grain at risk, as well as setting back global aviation and adding to the chaos of the shipping industry. What does that mean for the global economic system?

Adam Posen, president of the Peterson Institute for International Economics, spoke with “Marketplace” host Kai Ryssdal about his Foreign Affairs piece on how Russia’s war in Ukraine could accelerate what he says is the already corroding state of globalization. The following is an edited transcript of their conversation.

Kai Ryssdal: Do me a favor, would you and give me the thumbnail sketch of globalization as you see it before the Russian invasion of Ukraine?

Adam Posen: Yeah, before the Russian invasion of Ukraine, for the last several years, globalization has been what I call “corroding,” as opposed to say, the height of globalization — which I would put around 2000, when everything was sort of open to everybody. And I think there’s two things behind it.

Ryssdal: I was just gonna ask you, give me a couple of instances. What’s going on that globalization — which has been the economic force, as you say, in the last two decades — has now started to corrode?

Posen: I think there are two major forces. One is in the U.S., Kai. For 20 years, there’s been a lot of anti-globalization politics. And so we were becoming more and more unwelcoming to immigrants, doing fewer trade deals. The other thing, which is widely recognized, is China decided to pursue its own path, but tried to do so while still part of the global economy. And that presented a lot of challenges for people, for good reason.

Ryssdal: OK, then we have the Russian invasion of Ukraine — which, to be clear, you point out was the ethically, morally and just in every single way, right thing to sanction Russia about and try to exclude them from large parts of the global economy — but you say will make that corrosion of globalization worse. How?

Posen: Right. In my view, the corrosion gets accelerated. Because first you have a bunch of countries, including China, watching what the U.S. and its allies are doing to the Russian economy and basically saying, “All your assets are worthless because we’re not going to let you buy anything with them. You’re not going to get access to all the organizations and all the financial networks and even technology.” That’s really scary for people. And even if the rest of the world says, “It’s justified in this case,” what happens when [former President Donald] Trump, or for that matter [President Joe] Biden, says, “You know, I don’t like you, your regime. I’m going to go after you”?

A second thing that goes on is that people have been worried a lot over the last few years, for good reason, about supply chains. And one reason you’re worried about supply chains is interruptions because of earthquakes or storms. But another reason you’re worried is about geopolitical risk. And so I may have to build redundancies, essentially pay for expensive insurance, so that I can get these goods or make these production decisions someplace that’s geopolitically safe. And so those two factors, those are going to drive further the corrosion of globalization.

Ryssdal: What though, Adam, are the costs of that corrosion? Because if I am trying to get by, whether in this economy or another one, going to work, raising my kids, paying my mortgage, doing my job, how does that impact me?

Posen: Oh, it’s the right question, obviously. First off, people are seeing more inflation because of the energy disruption. But over the medium term, meaning two, three, four, five years out, what we’re gonna see is less variety of goods. And I don’t mean just how many cereal boxes, I mean, like, what kinds of cars, what kinds of communication equipment. You’re going to see more expensive products, because even if companies and governments are rational to build and relocate these resilient connections — or “bring stuff home” as President Biden sometimes says — that’s just going to raise prices.

A third thing that happens is in a world that’s more divided and more politically uncertain, you end up trapping people’s savings. The American savings or the European savings get allocated around the world, and that helps even the average saver. So run that in reverse: We’re scared of putting money into China, we’re not allowed to put money into Russia. That’s going to drive down the return savers get, and it’s going to reduce diversification. So you’re more at risk.

Ryssdal: Let me ask you the geopolitical question here, because you’ve got a great line. And I’m going to quote you back to myself, you know, President Biden has gotten a lot of praise from many quarters, for leading the allies in Europe, who, you know, can be a fractious bunch, to generally stick together to put the sanctions into place. But one of the things you say is that one of the corrosions, I guess, that might come out of this is that other countries might fear being subjected to Washington’s economic power. And here’s your quote, “now that it [Washington] is re-enamored with its apparent power.” So this is, at least in part, about what the Americans are doing.

Posen: Yeah. The economic realities are if we decide you’re a national security threat or we just don’t like you, we can cut you out of the financial system for decades like we did Cuba, Venezuela, North Korea, Iran. And now we’re even willing to do it to a nuclear power that exports energy, like Russia. People are gonna around the world say, “Well, I have to protect against that. I can’t count on that.” And I think that’s gonna have a chilling effect, frankly, on growth in the developing countries.

Ryssdal: We have learned over the past month that peace in Europe, even though we had it for 75, 80 years, is not a sure thing. We thought globalization was a sure thing. And now you make the point that maybe it’s not. Is this corrosion a sure thing? Or can what’s happening that you describe be reversed?

Posen: I think at a minimum, it can be offset. So I think the biggest thing is to build on the alliances that came together against the Russian invasion, strengthen the integration of our economies so you get some scale, some freedom, some diversification. And that also has the benefit of putting more competition within our world. So I think it’s important to create a market of the democracies as far as we can get it, as deep as we can get it, and it’s got to be people and ideas as well as just stuff.