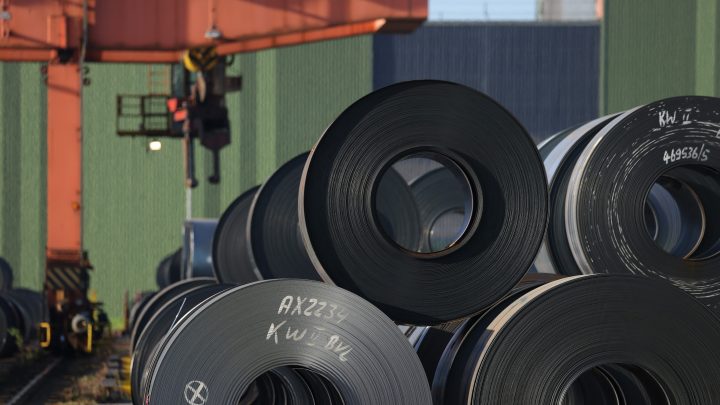 COPY
With the European Union's ban on Russian steel, countries might struggle to satisfy demand. But recycling could help. Sean Gallup/Getty Images

With the European Union's ban on Russian steel, countries might struggle to satisfy demand. But recycling could help. Sean Gallup/Getty Images
Listen Now

Russia is one of the biggest steel exporters in the world. This week, the European Union landed another blow on the Russian economy by banning imports of Russian steel, and the reverberations will be felt across a host of industries.

According to her, the ban on Russian steel includes an increase in the amount of steel EU members are allowed to import from other countries.

“So in a way, they’re trying to kind of just reallocate where they’re buying their steel from, but not necessarily reduce the amount of steel they’re importing,” she said.

But sourcing that steel elsewhere could be easier said than done. Russia is a big player in the global market for specific kinds of steel that can be further refined. A lot of that steel goes to the EU.

Malan Wu, head of steel research at Wood Mackenzie, said countries that had imported from Russia will be competing to make up for that lost steel.

“The supply will be tighter, more people will be looking for it, and also the logistics have been disrupted. And putting tighter supply and the higher demand, you get a higher price,” Wu said.

Lately when rising steel prices come up, it’s because of countries imposing tariffs to protect their domestic steelmakers from being undercut by cheaper imports. This is different.

“With a higher tariff, if you desperately need the product, you can just pay a little bit more for it, you know. It’s just [a] tax. But with a ban, if you suddenly can’t get it at all, then you could be stuck,” said Chad Bown, a senior fellow at the Peterson Institute for International Economics.

By disengaging from Russia, the EU is giving up leverage over one aspect of the country’s steel industry that concerns European countries: its carbon footprint. Steelmaking accounts for between 7% and 10% of greenhouse gas emissions worldwide.

According to some, the quickest way to decarbonize is to stop making steel the traditional way — from iron ore — which is the Russians’ main method.

“That’s the dirty stuff. Digging stuff out of the ground and making that into steel is the dirty part of the industry,” said Daniel Cooper, who teaches mechanical engineering at the University of Michigan.

EU officials had hoped to persuade Russia to clean things up. But Morgan Bazilian, director of the Payne Institute for Public Policy at the Colorado School of Mines, said now that’s taking a back seat.

“Will we get that kind of attention and prioritization to focus on these hard-to-decarbonize sectors like steel right now? No, we will not. It has fallen off of the priority list, at least in the short term,” Bazilian said.

Industrialized countries may not actually need to import Russian steel. One industry analyst said by investing more in recycling, they could supply 80% of their own needs by 2050.